Optimisation of Ordnance Factory Board 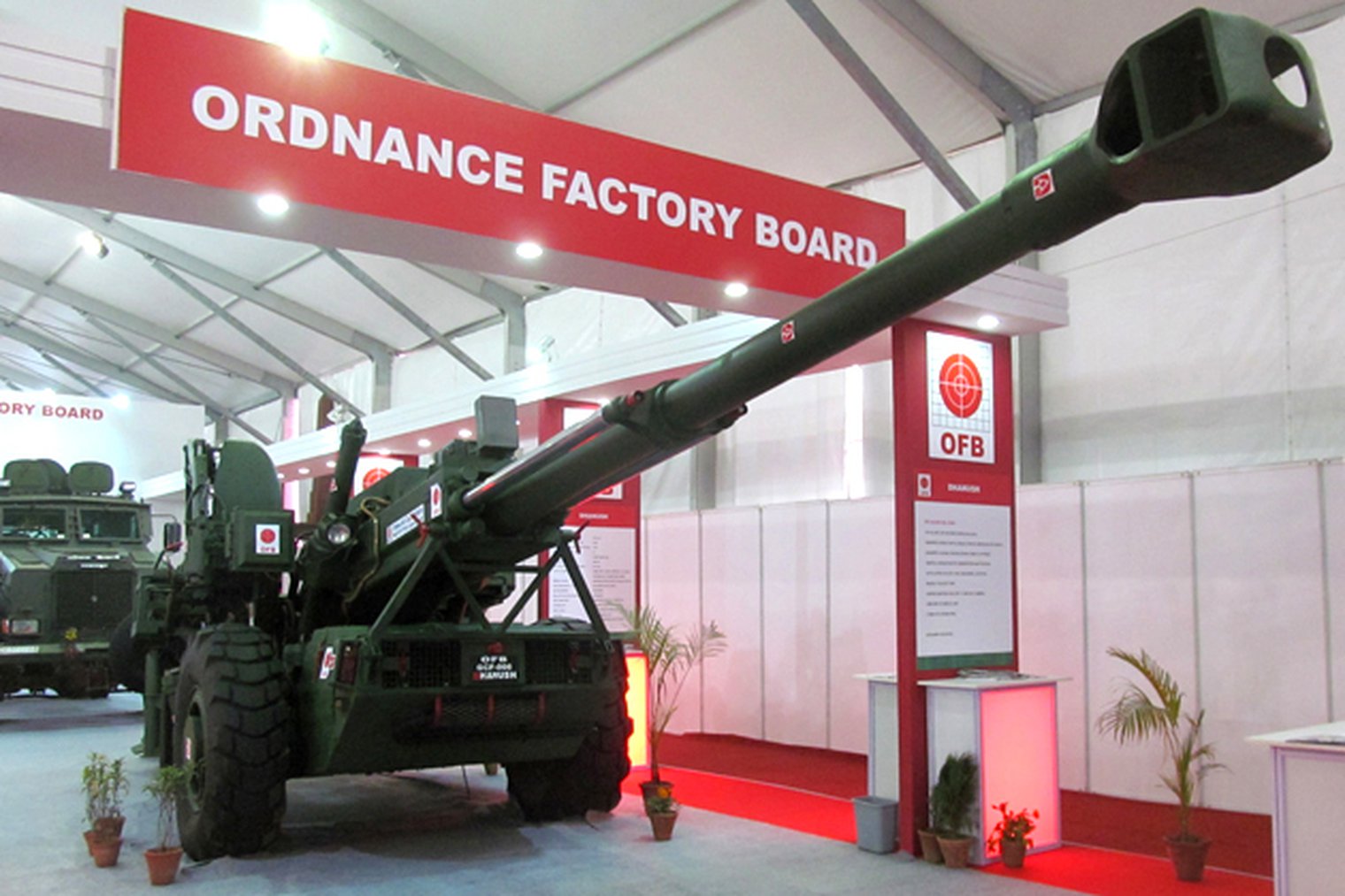 As an entity set up in 1979 to manufacture ammunition and explosives, weapons, vehicles and equipment, materials and components, armoured vehicles and ordnance equipment, the Ordnance Factory Board (OFB) today comprises 41 factories, 9 training institutions, 3 marketing centres and 4 regional controllers of safety. It is manned by a workforce of 82,000 apart from a cadre of IOFS and IOFTS comprising approximately 1700 officers. Given that the OFB is an attached organization under the Department of Defence with the Army, Air Force and the Navy as its prime customers and has been part of all the major wars of post-independence India, it is pertinent to reflect why its ‘restructuring’, ‘modernization’ and, of late, ‘corporatization’ been an issue for policymakers.

Between 2000 and 2020 there have been at least 2 reviews of its functioning resulting in calls for its reorganization/restructuring/corporatization. The TKA Nair Committee (2000) proposed the establishment of an OF Corporation Ltd; the Vijay Kelkar Committee (2004) also proposed corporatization of OFB to address issues of obsolescence and improving access to technology; the Raman Puri Committee on indigenisation (2015) proposed, inter alia, the establishment of 3 or 4 entities as DPSUs and the most recent Shekatkar Committee (2016) also addressed the issue of defence manufacturing and suggested corporatisation of OFB.

The Indian Army, which is primarily the OFB’s major customer, especially the Artillery and the Infantry, has flagged the OFB regularly for reasons of quality assurance, improvement of safety standards, timely supplies and costs. For an organization that prides itself on having met the requirements of the Army through all major post-independence wars, these calls are demotivating and touch a raw nerve.

The Department of Defence Production (DDP) as its administrative department finds itself in a difficult position. As the facilitating interface between the customer (armed forces) and the suppliers (OFB, Defence Public Sector Units or DPSUs and Industry) it promotes the Make in India initiative of the Government under the Defence Production Policy (DPP). It has actively promoted the ‘Buy-and-Make India’ option emphasizing Indigenization through the domestic industry. Several recent initiatives such as making available facilities of the Directorate General of Quality Assurance (DGQA) to industry, the establishment of a Defence Innovation Fund and undertaking of Defence India Start-Up Challenges (DISCs). The removal of 275 items from the core to the non-core list in 2017-18 was one of the steps intended to enable the OFB to focus on the core items and achieve better quality standards.

The DDP had submitted a Cabinet Note in August 2019 proposing corporatization of the OFB. The COVID 19 pandemic revival package of the government has set the ball rolling with some seriousness now. KPMG has been appointed as the consultant to propose a road map and to oversee its implementation with a 6 month time frame for each. While its recommendations are awaited, we must get all stakeholders on board for a coherent road map.

“Optimisation” of OFBs is perhaps a more encompassing term and suggests a more holistic approach to the issue. For one thing, it does not throw the baby out with the bathwater, acknowledging the role and relevance of the Ordnance Factories (OFs). It, however, acknowledges the necessity for ushering in change and the need to build on current strengths. In other words, it would appear to suggest optimal utilisation of the existing infrastructure and human capital. It is essential to consider what the objective of the proposed optimisation is and why it is felt necessary?

Corporatisation of OFB per se should not be considered a panacea for turning the OFs around. There are 9 other DPSUs which are corporatized entities several of which have been or are currently been disinvested. Will the OFs run this risk sooner or later? After all, the argument for creating the DPSUs outside the government structure was justified on the same grounds of financial and functional autonomy, attracting the best talent at market rates, flexibility in investments to promote acquisition of technology, retention and ploughing back of profits for modernization, promoting exports, etc. Can the OFs live up to similar expectations which appear attractive and promising on paper? Or will there be demands for disinvestment in years to come? Will functional autonomy be the selling point to unions and staff associations to secure their buy-in?

The issue needs to be viewed in the larger perspective of India’s quest for military prowess and creating India as an Asian manufacturing powerhouse, in which defence will play a significant role. From the pure defence perspective, modernization of defence manufacturing to achieve self-reliance is an absolute imperative. India’s defence budget is 2.3 % of its GDP (2019-20). It is 3rd in terms of arms imports according to the SIPRI report (2020), amounting to a whopping 71.1 billion USD which is estimated to approximately 15% of global arms imports. India’s domestic manufacturing accounts for approximately 25% of the total allocation in the Budget of USD 62.85 bn for 2020-21. The Prime Minister’s announcement of a 5 trillion USD economy by 2025 banks heavily on domestic defence manufacturing picking up the tempo with the Atma Nirbhar Bharat initiative facilitating import substitution in a big way since imports constitute a fair share in the current manufacturing scenario. Self-reliance in defence without indigenization in defence manufacturing will remain a distant dream.

Optimising of OFs will open several opportunities. Apart from freeing it from the confines of governmental procedures and the Government Financial Rules (GFR), it will enable it to plough back profits which otherwise accrue at present to the Consolidated Fund of India (CFI). It will facilitate the inflow of capital and modernise processes and upgrade skills through collaboration with the private sector. Finally, it will lead to greater quality consciousness, design and product packaging which will result in improved competitiveness in a liberalised market. The OFB will be able to utilize its existing infrastructure and workforce better if it considers JVs with industries which are factory specific and product centred. There is no reason why OFs cannot be made into profit centres which compete for FDI also under the existing regime. Acquisition of and collaboration with factories in friendly foreign countries can also be considered.

Optimisation of OFBs is an idea whose time has finally come. The threats from the strategic neighbourhood have increased. Government is committed to scaling up defence manufacturing and has revised the defence procurement procedures. An Import Embargo List of nearly 100 defence weapons and platforms having been published with effect from December 2020, the time is opportune for the optimisation process to commence.  It will create the right environment for JVs and investments which will also help the economy to stand firmly on its feet. With the Buy Indian option as its focus and the Indian Designed, Developed & Manufactured (IDDM) option as the default option, OFs will emerge as key entities.

So, what are the options for optimisation?

There are several models of optimisation that can be considered. KPMG will no doubt examine them. Let me mention two in this context. The Royal Ordnance Factories in the UK were corporatized in 1985 by Margaret Thatcher. Initially converted into a private limited company, the Royal Ordnance plc, it was merged in 1987 with British Aerospace. In the 1990s, following a series of mergers and acquisition, it took shape as BAe Systems. An example from closer home is the Oil and Natural Gas Commission, which was established in 1956, was corporatized in 1994 and is today a listed company which is also the holding company for the ONGC Videsh (OVL). In both cases, the timing was just right in that the respective sectors benefitted from opportunities that were opening up for them. Introduction of professional HR policies, financial and commercial policies have been resultant benefits which have benefitted the companies and their employees.

Technology assimilation in OFs will remain a challenge. The OFB has largely been undertaking licensed production and engaged in semi or complete knockdown assemblies. Foreign OEMs have traditionally been wary of transferring technology to them. The low expenditure on R&D by the OFB, which has been less than 1% of its turnover, has not helped. Its poor record in vendor development has also not helped in achieving import substitution. A vendor base of approx. 5000 despite 11 Ordnance Development Centres is a poor record. OFs should proactively reduce import dependency by reducing import content in the value of the issue. It is expected that once shaken out of the cocoon of the complacency of operating on a ‘No profit, no loss’ basis which transfers inefficiencies of high labour and material costs with nearly 25% overheads to the price charged, there will be some resultant competitiveness.  A shift from an attached office of the DDP status to a more commercial accounting system will, however, be essential.

Reforms in the defence sector have traditionally been slow and laborious. At the best of times, the military has been very conservative and cautious in its approach to change, given its onerous mandate and its hierarchy bound command and control structures. The adoption and adapting to change require several iterative processes as it has to be both based upon felt needs and organic in content. ‘Optimising’ is a much better approach as it moves beyond the rhetoric of the blame game to one of constructive suggestions and from historical analysis to practical suggestions for the future. Mere intent will not work.