Myanmar Crisis – What is ASEAN Waiting For? 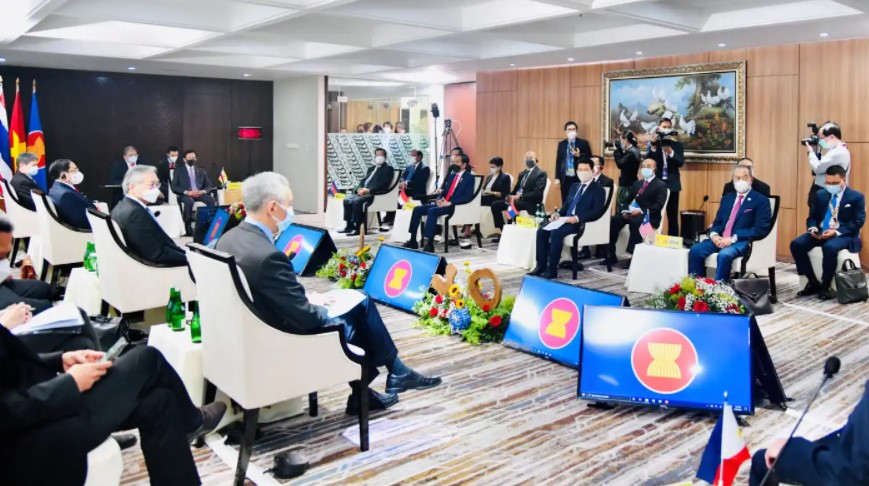 Myanmar Crisis – What is ASEAN Waiting For?

On 24 April 2021, ASEAN undertook a rare initiative by calling a Leaders’ Meeting in Jakarta, the headquarters of the ASEAN Secretariat. The agenda was mainly to focus on the situation in Myanmar. Though not a regular summit, it took several decisions, but effectively retained the initiative on Myanmar. More than a month later everyone is yet waiting for the ASEAN Chair, Brunei to implement the Five Point consensus reached on 24 April 2021.[1]

While people’s organisations were critical of engagement with General Min Aung Hlaing, ASEAN was clear that without engaging those in power a way forward was unlikely. The Leaders’ Meeting was essentially prepared by Indonesia, supported by Singapore, Thailand and Vietnam in the main. It was noteworthy that the summit did not take place in Brunei. The consensus sought appointment of a Special Envoy of ASEAN, who would, along with the Secretary General of ASEAN, engage with all parties in Myanmar to seek an effective resolution. While Brunei is the chair, the Secretary General of ASEAN, Dato Lim Jock Hoi is also from Brunei Darussalam.

It was widely expected that since Indonesia had initiated this process through Foreign Minister Retno Marusdi,[2] the Special Envoy may also be an Indonesian. Several names were mentioned including former Ministers Hassan Wirajuda and Marty Natalegawa. Singapore and Thailand suggested names too. But more than a month later, the reality is that there is no appointment of a Special Envoy. On 1 June 2021, Indonesia called for a speedy appointment.[3]

Given this anxiety, that the success of the Leaders’ Meeting may receive a setback, the ASEAN Secretary General and the Second Foreign Minister of Brunei, Dato Erywan Pehin Yusof stopped over in Myanmar on 4 June 20121 to meet with the current regime. They apparently handed over a list of possible Special Envoy nominees for concurrence. It is entirely possible, that for several reasons, there may not be a single Special Envoy, but a troika handling different aspects of the mediation process.

Most ASEAN countries seemed unaware of this initiative, though it is unlikely Brunei would have acted on its own.[4] It is clear that the process is slow and the steady progress anticipated is not forthcoming. Interestingly, the visit was as a detour from their visit to Chongqing for the China -ASEAN Foreign Ministers’ meeting.

The longer the delay in implementation of the Consensus, the more the chances of its diminishing utility. Of the 10 ASEAN countries, six had participated at Summit level to meet the Myanmar General in April 2021. Moreover, some ASEAN countries do not like intervention in their internal affairs, lest they are also subject to the kind of initiative taken now. Democracy is an ASEAN ideal in the Charter, in the Treaty of Amity and Cooperation in the ASEAN Community since 2015. However, in reality democracy is scarce in ASEAN.

Between the non-intervention and democracy theme, lies the trough in which ASEAN may trip over. It now appears that the process of appointing a Special Envoy has become an end in itself. Some countries see it as an effort by Indonesia to pursue its defence of the Muslim agenda; others see Singapore as trying to protect its investment channels worth about $24 billion and Thailand aiming to secure its borders from refugees. The others have perhaps now distanced from the slow process and are not seen as investing in it.[5] As the Chair, Brunei lacks the diplomatic heft to carry out such a new initiative and is possibly wary of Indonesia stealing its limelight. Unless the ASEAN countries work closely together and Brunei raises its game, the centrality of ASEAN will wither away.

The world is waiting for ASEAN to move ahead. Most countries have not taken action against Myanmar after it upended the quasi democracy, that it was practising since 2015. The African Union would suspend a member if a coup took place. ASEAN did not. The UN Security Council hoped that ASEAN would undertake measures to deal with its member to curb violence and restore order. The EU, the Quad, all had similar hopes as did India on its own.[6] In the absence of leverage in Myanmar, most countries wanted ASEAN to take centre stage that it often talks about.

However, there is no unanimity among global powers and neighbours. China and Russia, do not want any direct action against Myanmar as Chinese interests in Myanmar, do not coincide with the other P-5 nations. Among the Quad, India and Japan have a more cautious attitude, since they have direct interests in Myanmar, and do not want to push it closer to China, from whom it was weaned over several years. The USA and Australia are more vociferous in seeking a return to the limited democracy that Myanmar undertook. The Quad Summit in March 2021 said ‘We reaffirm our strong support for ASEAN’s unity and centrality’ [7]and ‘As long-standing supporters of Myanmar and its people, we emphasize the urgent need to restore democracy and the priority of strengthening democratic resilience.’[8] All these powers are watching the ASEAN efforts closely. Further delays in ASEAN implementing its Consensus, may see some countries start their own efforts beyond ASEAN, having given it its chance to act.

The Special Envoy was supposed to create an ambience of engagement within Myanmar, and to facilitate a lull in the violent crackdown on protesters. Over the last month these have continued undiminished. Aung San Suu Kyi meanwhile is being tried on several counts, and it is evident that the ruling junta will not let her return to active politics. Perhaps till she is firmly barred and the protests quelled, the chances of a limited democracy returning are weak. Perhaps Brunei realises this and hence adopting a slow pace. ASEAN is the only group who has actually engaged the Myanmar junta so far and have assumed responsibility, which is now hanging heavy on them. Not seeing it through now will weaken ASEAN and its centrality.

What are India’s options now? India does not want to lose influence and leverage in Myanmar. China has influence there, irrespective of any regime, through BRI and non-interference. India has security interests[9] and also wants economic opportunities to continue.[10] Its leverage to restore democracy is limited. A realistic view of continuing to support ASEANs slow efforts and engaging functionally with parts of the regular Myanmar institutions will serve us well. India need not go along with sanctions or pressure on Myanmar and needs to play it softly but firmly. India has open channels with concerned ASEAN members and these can continue till the India-ASEAN ministerial meeting in August 2021, when they may review this issue as well.

[9] Lt. Gen.Prakash Menon, India must be smart in supporting Myanmar, if Quad won’t measure up, 23 March 2021, The Print, Accessed at https://theprint.in/opinion/india-must-be-smart-in-supporting-myanmar-if-quad-wont-measure-up/626379/

Ambassador Gurjit Singh was an Indian diplomat for 37 years. He has been the Ambassador of India to Germany, Indonesia, Timor-Leste & ASEAN and Ethiopia, Djibouti and the African Union besides having been in in Japan, Sri Lanka, Kenya, and Italy on assignment. He was the Sherpa for the first 2 India-Africa Summits and his book ‘The Injera and the Parantha’ on India and Ethiopia was well received. He has also written books on India’s relations with Japan, Indonesia, and Germany.

Jun 13, 2021
I agree with the author’s opinion on India’s approach towards Myanmar. We have to play it softly. Although China has plenty of influence in Myanmar, the Junta is wary of China & its hegemonic designs. India has to tacitly convince the Junta that we are its friends & will stand by it in all scenarios. This will give the Junta enough breathing space in case of excessive pressure from China. We should use our influence with western powers to get them to take a more lenient position vis-à-vis Myanmar. This, combined with further investments from India & the west, could help wean Myanmar away from China’s grasp & that will help alleviate some of the pressures on our eastern borders.

Jun 12, 2021
Sir, Thanks for deep insight on Myanmar. Here we must directly engage and support Junta without any hesitancy and see that if they conduct Election in future we must make sure that the new elected government has pro India sentiments.