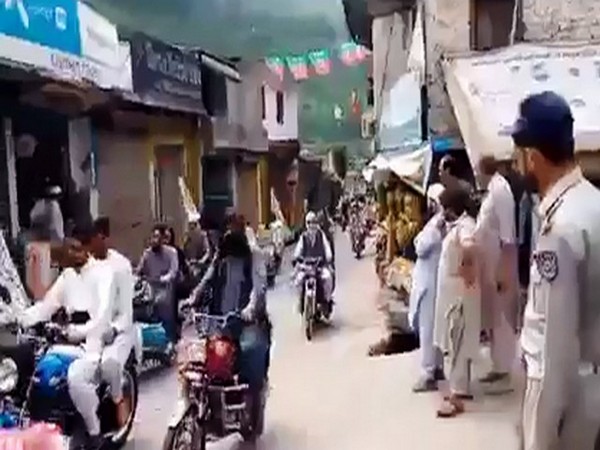 Poonch, (PoK) August 23 (ANI): Two of the most dreaded terrorist organisations, Lashkar-e-Taiba (LeT) and Jaish-e-Mohammed (JeM) carried out several rallies in Pakistan occupied Kashmir (PoK) as their terrorists who had gone to fight alongside the Taliban against the Afghanistan government returned home.

In videos out in the public domain, these terrorists could be seen embracing each other and firing shots in the air. The visuals are reportedly from the Abbaspur, Hajira and Sensa—areas that are not very far from Line of Control (LoC).

Dr Amjad Ayub Mirza, an exiled PoK activist who lives in Glasgow said, “Dozens of PoK based Taliban who had gone to Afghanistan on the instructions of Inter-Services Intelligence (ISI) and Pakistan Army to fight alongside the Taliban have started to return to PoK and yesterday dozens of these Taliban youth have arrived in PoK in Hazira and they are terrorising the local population by establishing roadblocks, checking people and asking them for their ID cards”.

While the Taliban was supposedly getting active political and military assistance from Islamabad all along its course till Kabul fell to them on August 15 this year, the terrorists from groups, who too are nurtured under the Pakistan army’s patronage, acted as a force multiplier.

“The basic purpose of this is to instill fear in the local population and then use Pakistani launching pads to infiltrate into Jammu and Kashmir. This is the second chapter in the terrorist instruction manual of Pakistani ISI that after Afghanistan, it’s going to be Kashmir and the rest of India”, said Dr Mirza.

Over the years, the two terrorist groups have primarily focused on India where their missions involve carrying out direct terror attacks, infiltration, indoctrination and sabotaging of New Delhi’s interests.

They have directly been funded by the state exchequer for carrying out a number of their sinister plots — one of the many reasons why Pakistan continues to find itself on the grey list of FATF — the Financial Action Task Force, a terror-financing watchdog based out of Paris. (ANI)