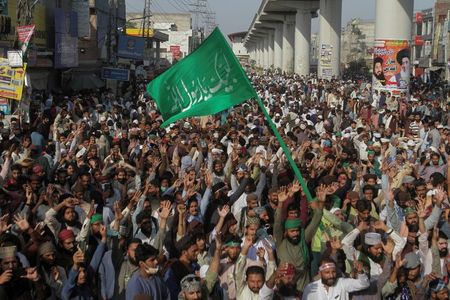 On October 6, relations between the military and the civilian government in Pakistan took a tumble after Prime Minister Imran Khan refused to issue the orders appointing Lt Gen Nadeem Anjum as the new ISI chief despite him being picked for the post by the Army Chief Gen Qamar Bajwa. Nearly two weeks later, on the occasion of Eid-ul-Milad, the Tehrik-e-Labbaik (TLP) announced a protest to press for its demands. Coincidence? Perhaps.

On the face of it there is nothing to suggest that the civil-military spat was linked to TLP going on the warpath. But then this is Pakistan we are talking about. Given the history of the TLP, and how it has been propped up, promoted, and put up to make life difficult for past governments (especially the PML-N of Nawaz Sharif), it is natural for people to conjure up plausible conspiracy theories.

If indeed the Pakistan Army is using the TLP to settle scores with Imran Khan, then it is playing with fire.  Organisations like TLP have a bad habit of invariably slipping out of the control of its handlers. The Pakistanis have already experienced this blowback in the form of jihadist groups that went rogue once the state and the military made some adjustments in its use of jihad as an instrument of policy which the jihadists saw as a betrayal.

Whatever the reality behind the latest protest of TLP, the Islamic party has created a really serious crisis. The visuals coming out of Pakistan gives an impression of an invading army of zealots marching on the capital city. The reaction of the government only buttresses this impression – trenches and ditches being dug up to stop the marchers, walls being erected on bridges and their guardrails being demolished, hundreds of containers being placed on the roads, internet and mobile services being cut, media organisations being instructed to not give any coverage to the TLP marchers. Meanwhile, the TLP has managed to brush aside all these obstacles and continue with its march, which to say the least is very impressive, but also terrifying.

The sight of thousands of common folk – the unwashed masses, the underclass of society – marching on foot towards the capital city in defiance of the elite and the authorities is quite unprecedented. Long Marches in Pakistan normally mean well fed politicians, sitting in their fancy SUVs – Pajeros and Land Cruisers – either going in a convoy from Rawalpindi to Islamabad (a grand distance of 30 kms) or at best driving comfortably from Lahore to Islamabad. This time however tens of thousands are walking to Islamabad. The slowness and deliberateness March is adding to the drama. What is more, there is no sign of the numbers falling; quite to the contrary, the numbers of the marchers are swelling. For ten days now the GT Road, the main artery linking central and north Punjab – the real heartland of Pakistan – is blocked.

The government has meanwhile run out of ideas on how to handle the marchers. There have been constant flip-flops, with ministers saying one thing one day, and then something quite opposite the next day. The mixed messaging summed up in a tweet by a Pakistani journalist – they are our brothers; no, they are a proscribed group; well, they are proscribed but not banned; no, they are both banned and proscribed; they are Indian agents; they need to be whipped and not be given any coverage by media; no, wait, we need to keep doors open for talks with them; we need to resolve the crisis amicably.

One day a crony of Imran Khan claims that the Prime Minister was not in the loop with the previous agreements that had been signed by his ministers with TLP; the next day, the ministers concerned claim that he was the one who gave the go-ahead for the deals; the third day, the spin doctors realise that far from distancing Imran Khan from the fiasco, they have shown him to be a clueless leader who doesn’t know what’s happening under his nose and so they try to brush the controversy under the carpet.

The panic in the government is compounded by the fact that the Army is not coming to its rescue. According to some reports, after the ISI appointment issue, the military is no longer stepping up to the plate to take the ‘selected’ government’s chestnuts out of the fire. The grapevine is that the Army is telling the government that it must give all instructions in writing and these must be legal otherwise they are not obliged to follow them. Imran Khan’s regime which has survived on the support it got from the military finds itself being thrown in the deep end, and doesn’t really know how to swim out of trouble. Not surprisingly, it is flailing. The police has proved to be utterly useless in stopping the marchers. If anything, it has been reduced into a punching bag with nearly half a dozen cops having lost their lives and over two hundred injured in clashes with the protestors.

With the government’s options running out, and people manning the government running scared, the Pakistan Rangers – a paramilitary force officered by the Pakistan Army – has been pressed into service. The Rangers have for now drawn a red-line at a place called Wazirabad on the banks of Chenab river, and warned that if the marchers try to breach this, they will resort to force, including fire on the crowds. But if the situation reaches that point, will they? This will be a big dilemma for the military top brass. They know that if they fire bullets into the crowd, the Army’s image will become mud in Punjab. There is also a fear that the soldiery might refuse to fire on people who are marching to uphold the respect of the Prophet. On the other hand, if they don’t fire and step aside, then the mob could run amok in Islamabad, something that will be extremely damaging for the Pakistani state and its reputation. The Army would therefore ideally like this matter to be resolved amicably by the politicians.

But that is easier said than done because the TLP has created a situation that no matter what the government does, it loses. If it uses force, causing casualties, the political repercussions of that will be disastrous for not only the current political dispensation but also for the Pakistani state. The TLP is not a jihadist organisation, not yet anyway. It is assertive, aggressive, even fanatical in its beliefs, but it doesn’t have a militant wing. Use of violence could push some elements of the TLP in that direction. The fact that bulk of TLP support comes from Punjab and Sindh means that if these people pick up arms against the state to protect what they think is their religious obligation – the respect of the Prophet and the finality of prophethood, two extremely emotional issues which the TLP has successfully weaponised – they can wreak havoc.

At the very least, a government that is already deeply unpopular will lose all right to stay in power and the aftermath of any serious violence against religiously inspired and motivated crowd could easily sweep it out of power. There is also a danger of individuals associated with the Imran Khan regime being targeted by TLP cadres.

The other option for the government is to step aside and let the marchers through. But this entails a serious risk of the mob going berserk in Islamabad. Even if it doesn’t enter the capital, but stages a sit-in protest in its favourite place – Faizabad, which connects Islamabad to Rawalpindi – it will have a serious impact on the authority of the state and its international image.

The last option is that the government does what it has done so many times earlier – tide over the immediate crisis by making a Faustian bargain and giving in to most of the demands of TLP (release of its leader Saad Rizvi, lifting the proscription etc.) and promising to re-look at relations with France. But this will set the stage for a bigger crisis, a few weeks or months down the road. Such a deal will embolden and empower the TLP even more and make it an unstoppable force, both on the streets as well as in politics. Worse, it will show up the Pakistani state as an effete and ineffective state that can be held hostage and blackmailed by any and every group with a cause and a committed and motivated cadre.

Whichever way you look at it, the Pakistani state is now between Scylla and Charybdis.

Nov 01, 2021
It is all a Pakistani drama to fool the world. Not even a Pakistani bird can flutter it's wing without army's permission.

Oct 31, 2021
This whole scenario doesn’t make any sense. The TLP is, of course, a puppet of the General Bajwa led Establishment but, if all that the Establishment wants is to ether get rid of Imran Khan or push him on the back foot then, this is an extremely dangerous and powerful card to play. I mean, given his outstanding incompetency, Imran is already on an extremely sticky wicket and there are plenty of smaller cards with which he could have been handled. The Military Establishment is not stupid and it knows very well that encouraging such radical protests will prove counter-productive to their personal interests in Pakistan. Logically speaking, it looks like a deliberate effort to ensure that everybody’s attention is riveted to one hand whereas nobody knows what the other hand is doing.