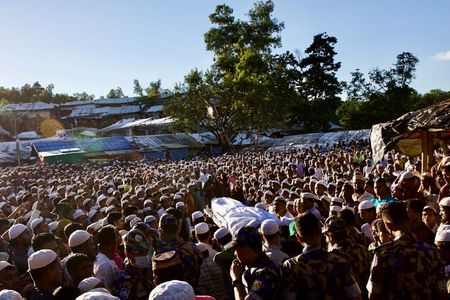 For years, Rohingya leader Mohib Ullah, one of the most prominent advocates for the persecuted Muslim minority from Myanmar, predicted he would be killed by the hardliners who regularly sent him death threats.

“If I die, I’m fine. I will give my life,” he told Reuters in 2019 in his office in a bamboo hut in one of the Bangladesh refugee camps outside the port of Cox’s Bazar. “If suddenly there’s an ‘accident’, no problem. Every community worker gives his life at last.”

On Wednesday night, gunmen shot him dead in the same office where he held community meetings. In a video circulated on social media, his brother, Habib Ullah, who said he witnessed the shooting, blamed the Arakan Rohingya Salvation Army (ARSA), an armed group active in the camps.

“They killed him as he is the leader and all Rohingyas abide by him,” Habib Ullah said in the video. Before opening fire, “they said he cannot be a leader of Rohingyas and there cannot be any leaders for Rohingyas,” he said.

Reuters could not independently verify his account. ARSA said in a post on Twitter on Friday that it was “shocked and saddened” by the killing and decried “finger-pointing with baseless and hearsay accusations”.

Gunmen fired on Mohib Ullah, who was in his late-40s and was married with young children, after evening prayers, a police official told Reuters by phone. He was buried on Thursday in the camp where thousands of refugees joined his funeral prayers.

Naimul Huq, a police official in Cox’s Bazar, said authorities had arrested a 27-year-old man, Mohammed Selim, in connection with the killing but gave no further details.

Mohib Ullah was known as a moderate who advocated for the Rohingyas to return to Myanmar with rights they were previously denied during decades of persecution. He was the leader of the Arakan Rohingya Society for Peace and Human Rights (ARSPH), which was founded in 2017 to document atrocities against Rohingyas in their native Myanmar and give them a voice in international talks about their future.

The killing has ignited grief and anger in the camps, the world’s largest refugee settlement, where some residents interviewed by Reuters say the murder is the latest evidence of mounting violence as armed gangs and extremists vie for power.

More than a million Rohingyas live in the camps, the vast majority having fled neighbouring Myanmar during a military crackdown in 2017 that the United Nations has said was carried out with genocidal intent.

Myanmar denies genocide, saying it was waging a legitimate campaign against insurgents who attacked police posts.

“He (Mohib Ullah) was the voice of the Rohingya community,” said a refugee, asking not to be named for fear of retribution. “He lived in fear but never gave up… Everyone is in fear. If a leader like him was shot dead, who else is safe? No one.”

A close associate of the slain leader told Reuters in a message he feared for his life.

Mohib Ullah came to prominence after going hut to hut in the camps collecting evidence of abuses against Rohingyas in Myanmar, including mass killings and gang rapes, that has been shared with international investigators. He spoke at the White House and U.N Human Rights Council, asking for Rohingyas to be given more of a voice in their future.

One ARSPH leader told Reuters in 2019 Mohib Ullah was being threatened by ARSA, whose attacks on security posts in Myanmar’s western Rakhine state preceded the army campaign that drove hundreds of thousands across the border.

Violent men claiming affiliation to ARSA and other armed gangs rule the camps at night, he and other refugees said, kidnapping critics and warning women against breaking conservative Islamic norms.

Several Rohingyas have told Reuters in recent months that ARSA and other armed gangs are behind the violence.

A close friend said on Thursday Mohib Ullah referred to ARSA as the “night government” and had continued to move from place to place to avoid being targeted by them. He said the activist had asked for protection from Bangladesh authorities and the United Nations.

ARSA has previously denied responsibility for criminality in the camps.

UNHCR said in a statement on Thursday it was “deeply shocked and saddened” by Mohib Ullah’s death and had “enhanced its staff presence in the camps to ensure that the Rohingya refugees have direct access to support services and can report their concerns”.

Rafiqul Islam, the police official, said Mohib Ullah had not filed complaints about the threats or sought police protection.

“If he did, we could have considered that,” he said.

Bangladesh government officials did not respond to requests for comment.

Eva Buzo, an Australian barrister representing Mohib Ullah and other victims in international criminal cases against Myanmar, said she and others had pleaded with the U.N refugee agency and foreign embassies in Bangladesh to offer him protection.

She said he was given travel permits for brief visits – in 2019 he went to meet Donald Trump at the White House and to speak to the U.N Human Rights Council – but not when he needed to escape the camp.

Diplomats and U.N officials, she said, “elevated Mohib Ullah as a moderate Rohingya leader and when he was receiving death threats no one was there to offer him protection.” 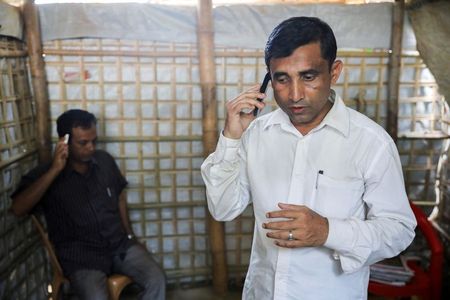