Jugaad: the USP and Way of Life in India 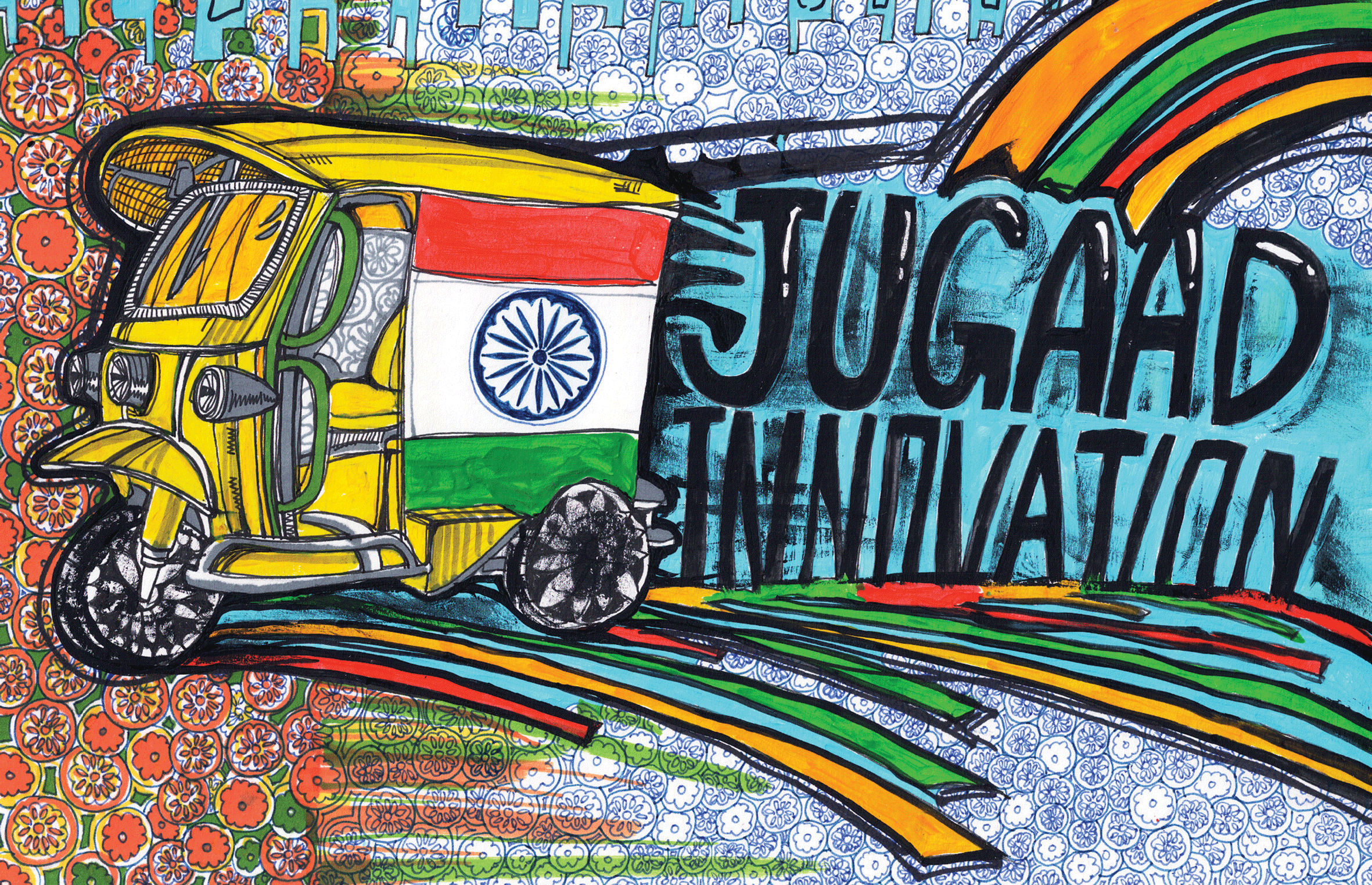 It is an accepted fact in India, that anything can be achieved by anybody as long as he possesses ‘jugaad’. The uniqueness of the system ensures that jugaad works. In fact, life will become hell for most Indians if the concept of jugaad is obliterated, but that’s simply impossible because to do that will require massive jugaad. Jugaad comes in various means and ways, as long it as it serves the ends! The rarity of getting things done without jugaad proves the point. So, what is ‘jugaad’? it is the elixir or magic potion or USP which ‘gets the impossible done’! it comes in various forms, a human, currency, power or position, clout, charm. You have to use it or approach jugaad to apply it. Mysterious isn’t it; well that is the charm of our ancient Indian civilization.

The non jugaadu lady/gentleman (who does work based on merits of the case and without application of jugaad) is ridiculed and seen as an enigma, an aberration and can even be socially ostracized. Everybody waits with baited breath for the non-jugaadu to leave, as nothing is achieved during that time. He/she is defined as a person who does not allow work to be done, nor can he do it, simply because he too has to apply jugaad to finally do it/get it done. Imagine approaching a government office (to register land or house, or approve infrastructure drawings), a railway TT, banker processing loan, Road Transport Officer approving driving license, an invigilator for final PhD viva voce, even a public figure wanting a political party ticket without jugaad; trains and roads will be empty as no one will have tickets/driving license, construction of buildings will stop, PhDs will be rare, elections without candidates! We depend on applying jugaad to get everything done and will need a decade of non-jugaad existence to get used to working/studying for something. It’s what we can call a jugaadu loop like Abhimanyu’s Chakravyuh which cannot be broken. With jugaad, people live happily ever after.

Jugaad goes by a few other names like ‘adjust’ (or adjust maadi in Kannada speaking Karnataka). Foreigners/outsiders not familiar with our system are amazed how things work when apparently, they don’t; air, rail or movie tickets procured when not available; licenses/permission for illegal construction; the list is endless being routine day to day occurrences. No hardened jugaadu user is fazed by any obstacle coming his way, an appropriately made request (along with some jugaadu tools!) saying ‘thoda adjust karo na’ with that jugaadu look opens all doors. Our neighbour Pakistan, seems to be beating us at our game (after all we were all in one before independence), they even have pilots flying Pakistan Airlines aircraft internationally without a flying licence. This is jugaad of all jugaads, Indian jugaadus are marveling at this act brazen by even jugaadu standards. Thanks to Globalisation, India has exported jugaad all over the world. Like basmati rice whose Indian uniqueness is at peril, we need to copyright jugaad to protect its Indianness and origin, before others walk away with jugaad, leaving India in a bigger mess.

It’s a way of life which spares nobody even those offering prayers. The pundits tell us that apply jugaad to God and he will do the needful, and hell hath no fury like a pundit ignored or scorned. Even darshan of the Gods will be denied as a bigger jugaad is required to meet the Lord. Naturally, God does not correspond directly, but the punditji will do it for you, once you ask him to adjust. In India, we need jugaad even once dead, a slot in the crematorium/burial ground or funeral ghats; which is provided for generously without a murmur so that your physical body is suitably disposed of to prepare for your journey to Valhalla. After that comes the real trials and tribulations of numerous pujas and procedures to ensure your place in heaven or wherever you wish to reside, which naturally is made easier by our very own jugaadu punditji. Life is therefore a full circle, as lots of jugaad has been applied for your birth (specially, if you are male); females can sometimes come in with little or even no jugaad at their own peril. Now if Trump was an Indian or visits India, one can imagine him proclaiming “ I love jugaad, Man I am so full of it, nobody has more jugaad than me, I am the King of Jugaad”. Wonder what Xi Jinping, Assad, Putin or Ayatollah would say about it.

There is a more positive version of jugaad known internationally. In fact, many management schools even teach it, and its popularity can be gauged by the fact that is has found its way into the English dictionary. As per the Oxford English dictionary jugaad refers to “the use of skill and imagination to find an easy solution to a problem or to fix or make something using cheap, basic items”. Jugaad is often celebrated as an example of the Indian spirit of resourcefulness and enterprise’. Jugaad has become “the Indian way of innovation” that management gurus advise the West to emulate. A form of law-breaking and street smartness in the face of poverty and governmental incompetence has been elevated into a management principle. Its universally acknowledged that Indians are best at jugaad. Some however, dismiss it as mainly taking shortcuts which many a time is not strictly legal. For example, some international reports often quote in an amused manner of a salesman who sells insurance policy to Mumbai’s train commuters who wished to travel ticketless. For a small amount he insures ticketless travelers from the consequences of being caught by ticket checkers. Innovative jugaad indeed. Another popular one is of an enterprising Sikh gentleman who uses a washing machine to make lassi (butter milk).

Unfortunately, the scams in defence procurements and matters (Bofors, submarines; the list is long) using jugaad has touched even the untouchable. One area where our penchant for jugaad is a big NO NO, is national security and our sovereignty and integrity. When the bugle calls, our Armed Forces have always risen to the occasion and done the nation proud. But they cannot always fight ‘with what we have’ and somehow ‘ADJUST’. The price is too heavy to pay. Let us resolve as Amitabh said in the movie Pink, ‘No means No’ to jugaad and ‘adjust maadi’, when it comes to national interests.

Jan 04, 2021
A very craftily constructed piece. Jugaad has become the way of life and this piece is a reminder to us that we need to overcome this jugaad mentality before we reach the next level of evolution as a society ! Very lucidly written. My compliments.