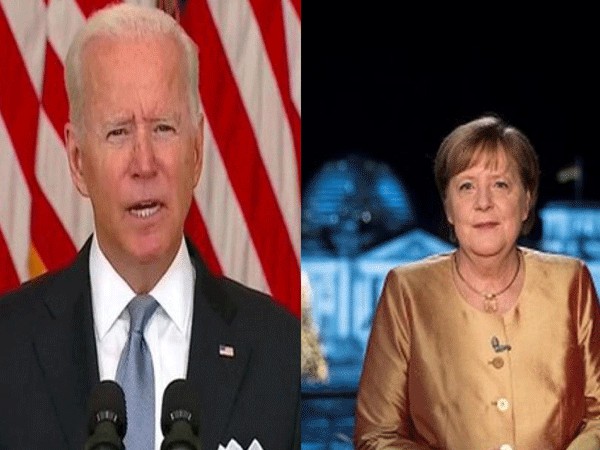 Washington [US], August 19 (ANI): US President Joe Biden on Wednesday (local time) spoke with German Chancellor Angela Merkel and discussed the need for close coordination on the provision of humanitarian aid for vulnerable people in Afghanistan.

This comes a day after Biden had a telephonic conversation with British Prime Minister Boris Johnson.

According to the White House statement, Biden and Merkel agreed to continue planning for humanitarian aid to Afghans in the upcoming virtual meeting of G7 partners.

“President Joe Biden and Chancellor Angela Merkel spoke today about the situation in Afghanistan. They praised the ongoing efforts of their military and civilian personnel who are working closely together in Kabul on the evacuation of their citizens, vulnerable Afghans, and the courageous Afghan nationals who worked tirelessly over the last 20 years to provide security, promote peace, and deliver development assistance to the Afghan people,” read the statement.

“They also discussed the need for close coordination on the provision of humanitarian aid for vulnerable Afghans in country as well as support for neighbouring states, and agreed to continue planning for this work in the upcoming virtual meeting of G7 partners,” he added.

The Taliban on Sunday took control of the presidential palace in Kabul soon after Asharaf Ghani fled Afghanistan.

On Monday, Biden put the blame for the current situation on the Afghan leaders, saying they gave up and fled the country so the military collapsed.”I stand squarely behind my decision. After 20 years, I have learned the hard way that there was no good time to withdraw US forces and that’s why we are still there,” he said.

“We were clear-eyed about the risk. We planned for every contingency that this did unfold more quickly than we anticipated. Afghanistan political leaders gave up and fled the country so the military collapsed,” he added.

Meanwhile, Angela Merkel, during a televised news conference on Monday, described the Taliban’s Afghanistan takeover as “bitter, dramatic and terrible”

Angela Merkel said, “This is a particularly bitter development. Bitter, dramatic and terrible…it is terrible for the millions of Afghans who have worked for the freedom of a society,” (ANI)