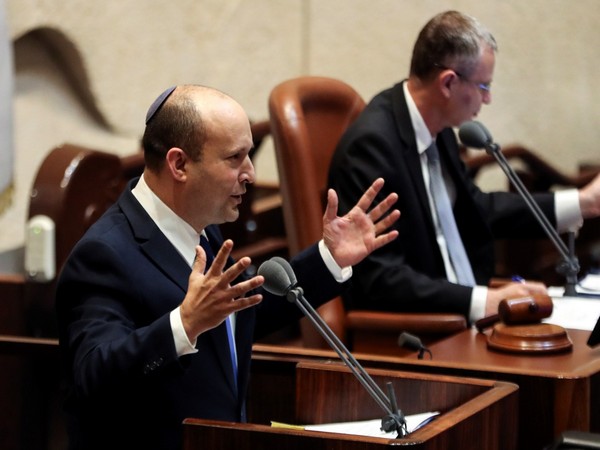 Tel Aviv [Israel], June 20 (ANI): Israeli Prime Minister Naftali Bennett on Sunday said the world should “wake up” to the election of Iran’s next president, stating that the “regime of brutal hangmen” Ebrahim Raisi must never be allowed to have weapons of mass destruction.

Without mincing words, Bennett at the weekly cabinet meeting said, “Of all the people that Khamenei could have chosen, he chose the ‘Hangman of Tehran,’ the man infamous among Iranians and across the world for leading the Death Committees, which executed thousands of innocent Iranian citizens throughout the years.”

“Raisi’s election is, I would say, the last chance for the world powers to wake up before returning to the nuclear agreement, and to understand who they are doing business with. These guys are murderers, mass murderers,” he said in sharply worded remarks.

Calling Iran a “regime of brutal hangmen”, Bennett further said Iran “must never be allowed to have weapons of mass destruction that will enable it to not kill thousands, but millions.” Iran has alleged that “a few hostile forces” are waging a disinformation campaign against its President-elect Dr Seyed Ebrahim Raisi, aiming to “manipulate public opinion” against him.

In a press release titled “An Introduction to Ayatollah Dr. Ebrahim Racisi”, the Embassy of Iran in New Delhi said that neither grievances about the economic situation, nor concerns for the threat of pandemic could overcome Iran’s determination and impede its participation in the presidential polls.

“However, in the wake of Ayatollah Dr. Seyed Ebrahim Raisi winning the June 18 Presidential elections with a landslide victory, while most political leaders and groups praised his election to this prominent post and congratulated the Iranian leadership and people, there were few hostile forces which engaged in waging misinformation campaigns in some media in order to manipulate the public opinion in respect of Iran’s new President, which might otherwise not be known to the general public outside Iran,” the statement said.

On Sunday, the Iranian interior ministry announced that ultraconservative cleric and judiciary chief Raisi has been elected Iran’s eighth president.

Raisi will take office in early August, replacing President Hassan Rouhani who was not allowed by the constitution to run for a third consecutive term.

The ministry confirmed on Saturday that Raisi won 61.95 per cent of the vote on a voter turnout of 48.8 per cent – the lowest turnout for a presidential election since the 1979 revolution. (ANI)

Jun 20, 2021
Iran and it's relationship with israel is like a real action thriller 😁