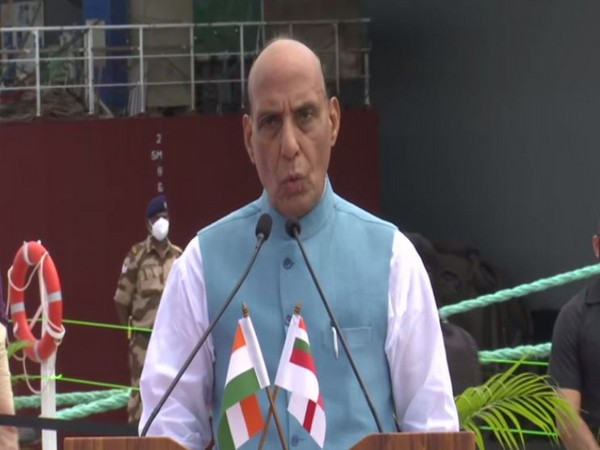 Kochi (Kerala) [India], June 25 (ANI): Defence Minister Rajnath Singh on Friday said that commissioning of the Indigenous Aircraft Carrier (IAC) next year will be a befitting tribute to 75 years of India’s Independence, terming it as country’s pride and a shining example of Atmanirbhar Bharat.

Speaking at the Southern Naval Command after reviewing the construction work of the IAC, Rajnath said: “It was a pleasure to review the construction work of the IAC first-hand. The project was originally approved by the National Democratic Alliance government and has made significant progress in the recent past despite COVID. Commissioning of the IAC next year will be a befitting tribute to 75 years of India’s independence.”

He also said that the combat capability, reach and versatility of the aircraft carrier will add formidable capabilities in the defence of our country and help secure India’s interests in the maritime domain.

Asserting that the government is fully committed to a strong Navy, he said: “Yesterday, I also reviewed Project Seabird at Karwar, which will be the largest Naval Base of the Indian Navy in future, and will provide the facilities and infrastructure to support the Navy’s operations in the Indian Ocean Region and beyond.”

The Defence Minister further said that their impetus to modernisation, harnessing India’s indigenous industry and know-how, is a key priority and 42 of the 44 warships on order being built at Indian shipyards is a testimony to this.

“The IAC boasts of nearly 75 per cent indigenous content, from design to steel used in construction, to key weapons and sensors. DAC has also recently accorded approval for the RFP of Project 75-I under the Strategic Partnership model, which will give further fillip to the indigenous development of niche manufacturing technologies,” Rajnath added.

The Minister said that these measures will help enhance the Indian Navy’s operational reach and prowess to protect India’s maritime interests. The Indian Navy remains poised and combat-ready to tackle any challenge.

Lauding the efforts made by the Navy in times of crisis like the COVID pandemic and Cyclone Tauktae, he said: “The Navy has also made significant contributions in the fight against COVID, bringing back citizens from overseas during Op Samudra Setu-I, and much needed Liquid Medical Oxygen during Samudra Setu-lI, despite dangers of COVID spread onboard warships. SAR efforts by the Navy during Cyclone Tauktae showcased the spirit of daring and courage among our men and women in whites.”

He also spoke about Prime Minister Narendra Modi’s vision of SAGAR (Security and Growth for All in the Region) and stated that our efforts are in alignment with his vision of SAGAR and the wider goal of a Free, Open and Inclusive Indo-Pacific, to ensure peace and stability in the region. (ANI)