India’s Tryst With UAV: From Surveillance To Strike 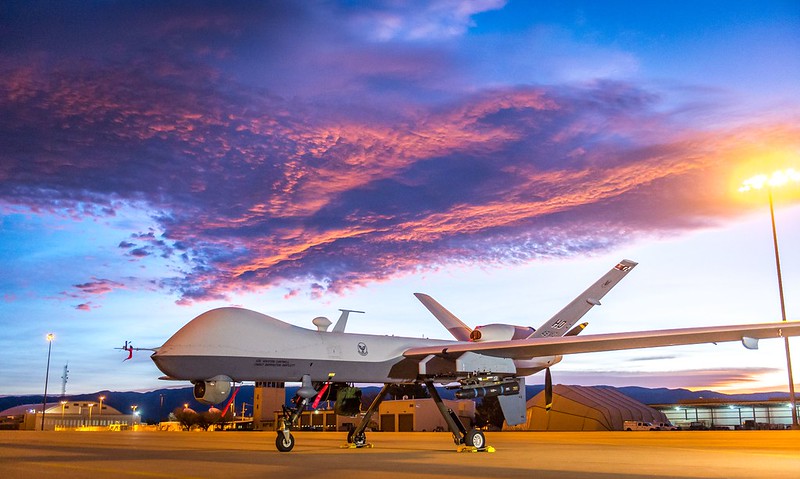 “An Unmanned Aerial System is the true harbinger of warfare beyond contact- no other system has the capability to listen, see and strike with such inconspicuousness and impunity”

Nov 2021:   India’s (Technology Experiment Satellite) TES imagery shows presence of troops and Armoured Personnel Carriers (APCs) approximately 45 km to the East of Galwan, astride the Line of Actual Control (LAC). Confirmation of buildup needs to be urgently corroborated in order to pre-position own troops and thwart any attempt at ingress. Mission orders are relayed to affiliated UAV troop. Two Heron TP Unmanned Aerial Vehicles (UAV) are airborne and fly parallel to the LAC at 30,000 feet, utilizing their Synthetic Aperture Radar (SAR) and Electro -Optical (EO) Camera to confirm this buildup. The images are relayed in real time to the Leh Headquarters, resulting in own timely action.

Aug 2022:    A large group of terrorists is seen infiltrating through a pass on the Line of Control (LC) on the Pir Panjal Ranges in Kashmir. Physical interception by troops on ground is not possible in the required time frame, failing which the terrorists are likely to and escape into the hinterland.  A decision is taken for aerial engagement of the infiltrating column. Targeting orders are issued to the Heron Unmanned Combat Aerial Vehicle (UCAV) Troop in the Area of Responsibility. UCAVs are armed, airborne and over the pass in 25 minutes. Post positive identification based on image streaming, two Precision Guided Munitions (PGMs) are fired on the infiltrating column resulting in casualties to the terrorists and foiling of the infiltration bid.

As is evident from two imaginary scenarios above, the UAV has become an indispensable part of our combat capabilities. A UAV (the term will include Remotely Piloted Vehicles and drones) is by definition an aircraft that can be remotely piloted without requiring human presence on-board. The UAV is a component of an unmanned aerial system (UAS), which would include ground-based infrastructure, communications/ guidance and command links with the UAV. Today’s UAVs are graduating to increasing levels of autonomy where it is possible for the UAV to literally ‘fly itself’ and also engage ground targets.

India’s tryst with UAVs began when own Defence Research and Development Organisation (DRDO) was tasked to develop a catapult launched UAV. Consequently, Nishant UAV was developed in 1988. Nishant saw operational deployment during the Kargil War in July 1999. Though the system was operationally fielded, mission reliability issues took their toll on the continued effectiveness of the project.

Envisaged Employment.  The present roles that can be assigned to an Unmanned Aerial System (UAS) in the Indian context range from operational to Humanitarian Assistance and Disaster Relief (HADR).

HADR tasks for UAVs include mapping disaster- struck areas which, in turn, can aid swift and efficient disaster response. UAVs were used effectively during the Uttarakhand floods in 2013, and subsequently during the Kerala floods in 2018.

Operational challenges present in the form of an active LC/ LAC, spanning over 4800 km. Both these boundaries are characterised by broken terrain and in a large number of places, dense vegetation. Line of sight challenges necessitate continuous surveillance over these areas by means other than static observation. In addition, Left Wing Extremism in the jungles in India’s heartland present an equally steep challenge with regards to real time surveillance and monitoring. An increasing need is also felt to attain the capability to actively engage such targets with minimum delay / collateral damage. This requirement would obviously give UAVs an edge over conventional aerial engagement.

What then is India’s developing and future UAV profile?

Rustom.   The Rustom is a UAV under development by DRDO. Rustom 1 was expected to replace/supplement the Heron UAVs in service with the Indian Armed Forces. Rustom 2 is a MALE UAV which capable of performing real-time intelligence, surveillance and reconnaissance (ISR) tasks. In October 2020, DRDO flight tested the Rustom-2 and achieved eight hours of flying at an altitude of 16000 feet. The prototype is expected to achieve a height of 26000 feet and endurance of 18 hours. The Rustom 1 Project is reportedly deemed closed due to technological and cost over runs, while the Rustom 2 Project is still active and is likely to be inducted in the near future.

Upgraded Heron/ Heron TP.   In a major boost to strategic surveillance capabilities, the IA will deploy four unarmed Israeli advanced Heron TP (Eitan) MALE UAVs leased for a period of three years at a cost of US $ 200 million along the LAC. The UAV (payload-1000 kg, endurance 36 hours, range- over 1,000 kilometres and service ceiling in excess of 45,000 feet) is equipped with automatic taxi-take-off and landing (ATOL), Satellite Communication (SATCOM), and fully redundant avionics. Such leasing of military equipment by IA is unprecedented and has been made possible after this clause was introduced in the latest version of the Defence Acquisition Procedure. India is also reportedly planning to acquire the upgraded version of Heron UAV, which will carry long-range radars and EO/IR systems for detection and tracking of targets and also have SATCOM, Electronic Intelligence (ELINT) and SAR (Synthetic Aperture Radar) systems. 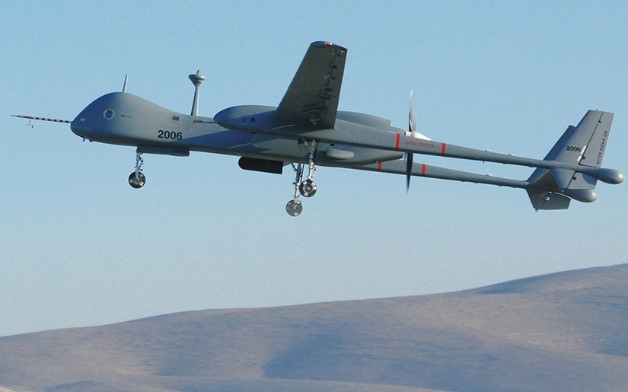 Tactical UAV System.   While present mini UAVs held with units/ bases are ex Commercial Off The Shelf (COTS) equipment, a need is also felt to identify/ develop a tactical UAV system for use across the three Services and with the BSF and other Central Armed Police Forces for persistent all weather surveillance and intelligence gathering. The system must be suitability hardened against counter drone technologies and have the capability for runway independent operations/ auto retrieval. The system should preferably have the capability to dovetail into the existing UAS for sharing of real time information.

Rustom 2.  The advanced version of Rustom 2 will be capable of carrying air-to-surface armament in the weaponised avatar made possible with an enhanced payload of 3000 kg.

Project Cheetah.  This is a Rs. 3500 crore project for arming of the existing Heron UAVs which has been revived due to the ongoing developments along the LAC. The armament is likely to include laser guided bombs/ PGMs and air launched Anti-Tank Guided Missiles (ATGMs). In addition to collaboration with IAI of Israel, the project is also likely to incorporate indigenous solutions, thus conforming to the ‘Make in India’ theme.

Harop.  Also built by IAI, this hunter-killer drone functions in a ‘kamikaze’ mode and launches itself on a pre-programmed target. This UAV is capable of loitering and has anti- radar homing capability. The IAF reportedly purchased 10 Harops from  for a US $ 100 million contract. The project also has a mini version, one fifth the size of the original drone and capable of carrying smaller explosive payloads, which is worthy of consideration. 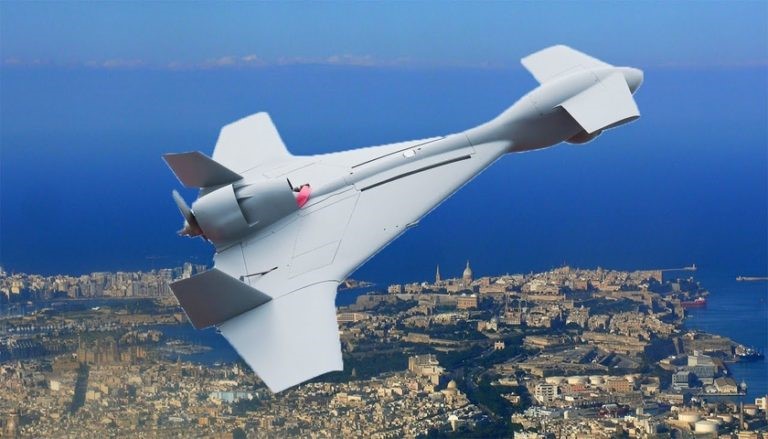 MQ- 9B Sky/ Sea Guardian UCAV.   Amid the ongoing belligerence in the region, India is set to purchase 10 MQ- 9B UCAVs each for the three Services (the IN version will be the Sea Guardian, separately configured for maritime ISR missions) for a project cost of approximately US$ 3 billion. Delivery is likely by 2023-24. The UCAVs possess endurance of upto 40 hours with a service ceiling of 40,000 feet. The Sky Guardian carries Raytheon’s multi-spectral targeting system (MTS-B) sensor suite to provide long-range ISR, target acquisition and tracking capabilities. The UCAV is fitted with a total of nine armament hardpoints. In November 2020, the IN began operating two MQ-9B Sea Guardians, leased for maritime ISR from Israel under the Acquisition Policy for one year. The IA / IAF have also reportedly identified operational bases for these UCAVs in the Eastern/ Western theatres. 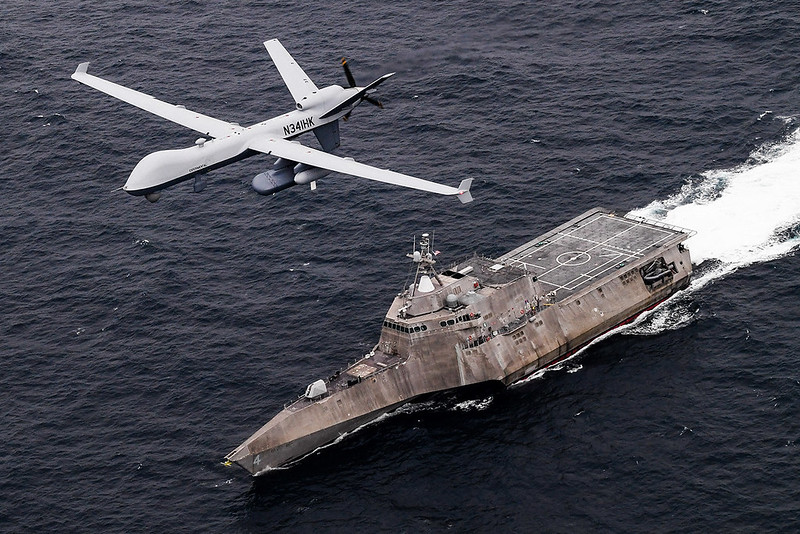 Ghatak. Ghatak is an autonomous UCAV, being developed by the DRDO.  The UCAV will be capable of firing missiles, bombs and PGMs. First flight of a scaled down test bed is scheduled in this year and that of a full-scale prototype is expected in 2024-25. The UCAV is likely to have stealth characteristics.

Swarm Technology. Recently, the IA showcased the use of swarm technology during Army Day 2021, when upto 75 drones with offensive capability identified and destroyed mock targets. Future development is likely to see massed employment of a larger number of drones in master- slave as well as independent configuration.

High Altitude (HA) Surveillance and Logistics UAVs.  The IA has reportedly signed a US $20 million contract with M/s ideaForge under the Emergency Procurement clause for delivery of the SWITCH HA UAV. The Vertical Take-Off and Landing (VTOL), auto recoverable surveillance UAV is capable of day/ night feed, has a range of 15 km and is capable of take- off from an altitude of 4000m. Logistics drones to ferry loads of upto 20 kg over 10 km in high altitude in support of operations along LC/ LAC are an imperative requirement that is being looked at.

Nano/ Mini Drones and Counter Drone Technology.    Due to the large incidence of drone incursions along our borders, the Armed Forces have expressed interest in counter drone technology, with capability to detect, jam and spoof adversary drones upto a 7- 10 km distance. This includes hand held jammers for shorter ranges. Nano/ mini drones (10 km range) find applicability at tactical level and in typical scenarios of fighting in built up areas.

Runway Independent UAVs.  Global tender has also been floated for runway independent machines with upto 200 km range to obviate problems of real estate for landing/ take off in remote areas.

Loitering Munitions.  Expression of Interest (EoI) has also been requested under ‘Make in India’ theme for loiter UAVs with 40 to 60 km range and capable of attack in ‘kamikaze’ /payload delivery mode, with programmed/ autonomous target selection. (More about Loitering Munitions can be read at  https://bit.ly/3fXo051 )

‘Minefield Detection’ UAVs. This has reportedly been identified as an ‘in house’ Armed Forces project for detection and marking of minefields. The technology developed could also find use in HADR for survivor tracking in natural calamities.

As is plainly evident from the application scenarios and identified areas of employment, UAV technology (which includes drone technology) is rapidly emerging as a frontline tool for safeguarding/ furtherance of own operations. The philosophy of being capable of influencing a situation beyond physical reach can only be driven by a technology that allows such insight and control- a technology that firmly transcends roles from surveillance to strike and through the present to future operational paradigms – the technology of the UAV!