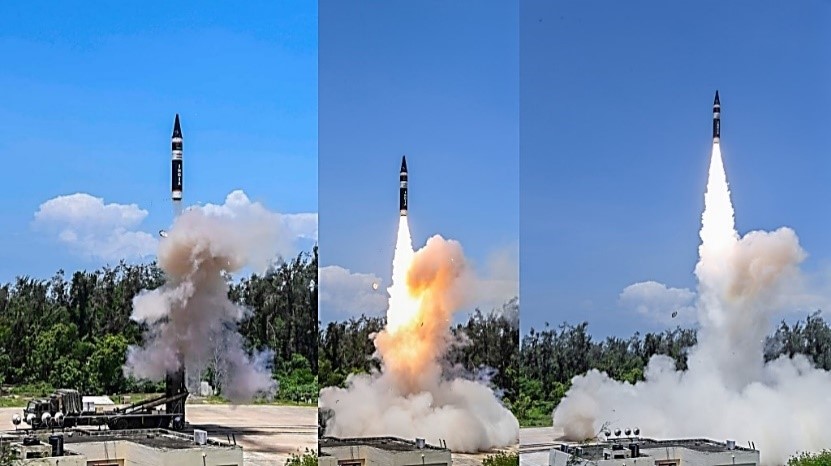 Brahmāstra (ब्रह्‍मास्‍त्र): A divine weapon, irresistible, one given (created) by Lord Brahma himself

India’s ‘Brahmastras’, or its Surface to Surface Missiles (SSMs) were born out of the DRDO’s Integrated Guide Missiles Development Program (IGMDP) which was launched on 27 July 1983, under the able stewardship of Dr APJ Abdul Kalam. The journey of the IGMDP commenced with the development of Prithvi family of tactical SSMs, categorised as Short Range Ballistic Missiles (SRBM), which were India’s first indigenously developed ballistic missiles. The clamour for a longer-range ballistic missile that could strike nuclear and conventional targets deeper inside the adversary’s heartland led to the development of the Agni series of Intermediate Range / Intercontinental Ballistic Missiles (IRBM/ICBM) with re-entry technology and the ability to withstand the extreme temperatures on re-entry into the earth’s atmosphere. The Agni guided missile first flew in 1989.

Today, the IGMDP has matured with both the Prithvi and Agni series of missiles having entered operational service. These missiles have been developed in a plethora of variants (three for Prithvi and five for Agni) to cater for various ranges and payloads. Prithvi also graduated from liquid to solid fuel propulsion, since the former was more difficult to store and use in battle conditions. While the Prithvi (with a service history in all three Services and the Strategic Forces Command [SFC]) catered for ranges up to 750 km and the Agni catered for ranges from 1000 km to 5000 km, it was realised that the multitude of SSMs under the IGMDP did not readily cater to ranges at which tactical/ operational battles would be fought. This realisation led to the development of the Prahaar, Shaurya and Pralay Ballistic Missiles, aimed at striking the enemy in and beyond the contact battlefield. Further, the large number of variants gave rise to logistical concerns and the requirement to deploy multiple variants to strike targets at tactical, operational and strategic depth in battle, thus necessitating the development of a more versatile and omnipotent variant. This led to the development of the Agni-P, designed to combine the capabilities of the older Prithvi, Agni-I and Agni-II SSMs.

As has been enunciated above, these missiles have been developed for targeting the adversaries’ conventional or nuclear assets deployed in or beyond the tactical battlefield, which could span a depth upto 150 km or more. The requirement to engage fleeting targets across and beyond the tactical depth would imply the need for these missiles to possess greater manoeuvrability, higher accuracy and quicker deployment speeds.

The Prahaar (‘Strike’) is a road-mobile, all-terrain, all-weather, single-stage, solid-fuelled SSM with an effective strike range from 60 to 150 km. While this Tactical Ballistic Missile (TBM) is capable of carrying conventional High Explosive (HE), nuclear or sub-munition payloads, its employment is envisaged for conventional use.  This TBM has been developed to replace the Prithvi-I SRBM, which has a range of 150 km. The TBM underwent its maiden test flight from the Integrated Test range (ITR) at Chandipur, Orissa on 20 July 2011 and was again successfully test-fired on 20 September 2018. Prahaar is mounted on and launched from a road-based Transporter-Erector-Launcher (TEL), which carries six missiles. The TEL can be operated in stand-alone mode, thus according significant flexibility in deployment and operation. The TEL can be deployed in less than 5 minutes and can launch the missiles in salvos at different targets spanning a wide arc, with no prior preparation! The Prahaar is also expected to counter Pakistan’s Hatf-IX or Nasr nuclear capable TBM, believed to have been developed to strike India’s mechanised forces in the battlefield. As an upgrade, the Indian Armed Forces expressed interest in a TBM with 200 km range, which led to the conceptualisation of the Pranash TBM, with developmental trials initially scheduled for 2021 and user trials by 2023. The Pranash is designed to carry a conventional warhead and will be solid-fuelled, with a lower minimum range of 40 km as compared to 60 km for Prahaar, thus allowing Pranash to strike targets at closer ranges. Since the TBM is within the ceiling of 300 km range laid down for export of missiles under the Missile Technology Control Regime (MTCR), India could also look at export of this variant to other countries. It is expected that these missiles would be  game-changers in the arena of short range tactical ballistic missiles. 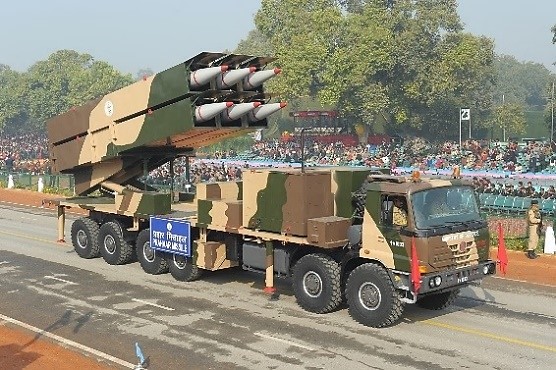 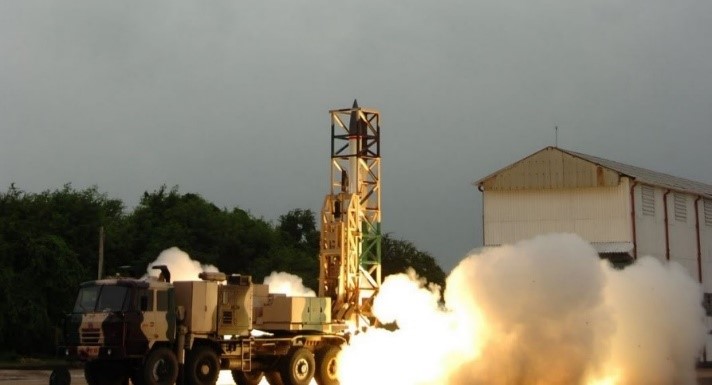 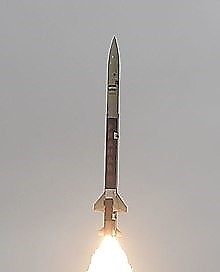 The Shaurya (‘Bravery’) is a road-mobile, two-stage, solid-fuelled canister launched hypersonic SSM designed by DRDO and manufactured by Bharat Dynamics Limited (BDL). The missile has a variable range from 700 to 1900 km due to its capability to mount a 180 to 1000 kg conventional HE or nuclear warhead and is thought to be the land-based improved version of the K-15 Sagarika Sea-Launched Ballistic Missile (SLBM) with a range of 700-750 km. The nuclear payload could range from a yield of 17 to 200 Kilotons. The large range variation allows this SSM to fit below and within the ranges of the Agni series of SSMs and strike targets at operational and strategic depth. The SSM is stored in and launched from a fiberglass canister, thus facilitating ‘cold launch’ of the missile from a TEL, which significantly reduces its signature on deployment and launch. The missile is ejected from its canister by high-pressure gas from a gas generator located within the canister before the first stage motor takes over the propulsion, taking the missile to an altitude of 5 Km. The second stage motor then takes the missile to an altitude of 33 km. Post this, the aerodynamic fins influence further flight of the missile towards the intended target. Shaurya has a high degree of accuracy and can manoeuvre in a low trajectory within the earth’s atmosphere, thus making it difficult to detect by adversary’s radars oriented towards detection of ballistic missiles during re-entry into the earth’s atmosphere. In-flight detection of the missile is further made difficult due to its slender cross-section (CS) of 0.74 m, as compared to the 1 to 2 m CS of the Agni and Prithvi series of SSMs. Detection and interception by ballistic missile defence (BMD) shields are further obfuscated due to the capability of the missile to fly at speeds upto Mach 7.5. The hypersonic SSM was tested from the ITR in October 2004, which was the first of a series of test flights. The SSM was test-fired in its improved final configuration 03 October 2020. Shaurya was approved for induction into the SFC post this test. 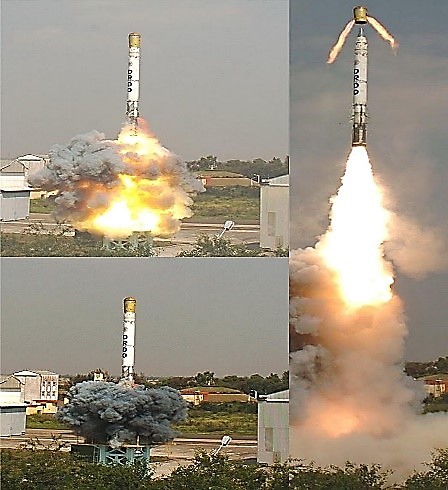 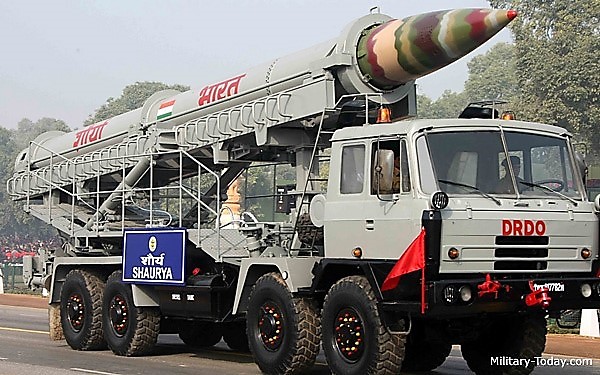 The Pralay (‘Destruction’) is a road-mobile, two-stage, solid-fuelled canister-launched Short-Range Ballistic Missile (SRBM). This SSM has emerged from the unification of the propulsion technologies of the two-stage, solid-fuel exo-atmospheric Prithvi Defence Vehicle (PDV) ballistic missiles interceptor, developed under India’s BMD Program and that of the Prahaar  TBM, elucidated above (BMD has also been briefly covered in an earlier article https://chanakyaforum.com/mr-sam-boosting-efficacy-of-indias-air-defence/). The Pralay has a range of 150 to 500 km with a payload weight of 370 to 700 Kg. This allows it to augment the Prithvi series to strike targets at lower ranges and importantly, to fit into the lower-range engagement gap of the Agni series of ballistic SSMs. The higher payload weight allows greater lethality than the BrahMos, which, though accurate, can only carry a payload weight of 200 to 300 Kg (read more about the BrahMos @ Chanakya Forum  https://chanakyaforum.com/brahmos-cruise-missile-indias-contender-in-the-supersonic-vector-race/ ). The SRBM is said to follow a ‘quasi-ballistic’ trajectory, wherein, post the ballistic missile phase, the warhead follows a Manoeuvrable Re-entry Vehicle (MaRV) trajectory, using mid-flight manoeuvring and likely Thrust Vector Control (TVC) to avoid BMD interception and strike surface targets. The missile uses new-generation composite propellant developed by DRDO’s High Energy Materials Research Laboratory, that has higher efficiency than that of the Agni missiles, thus allowing reduction in overall size and CS of the missile. The SSM can mount a conventional warhead with HE Pre-Fragmentation (PF), Penetration-cum-Blast (PCB) and Runway Denial Penetration Submunitions (RDPS) configurations. The conventional configuration allows Pralay to effectively strike targets in the tactical and operational realm without breaching the nuclear threshold. The SSM has been successfully tested on 21 and 23 December 2021 from Abdul Kalam Island (AKI) in the Bay of Bengal. Further confirmatory test-flights are likely before the SSM is operationally inducted. 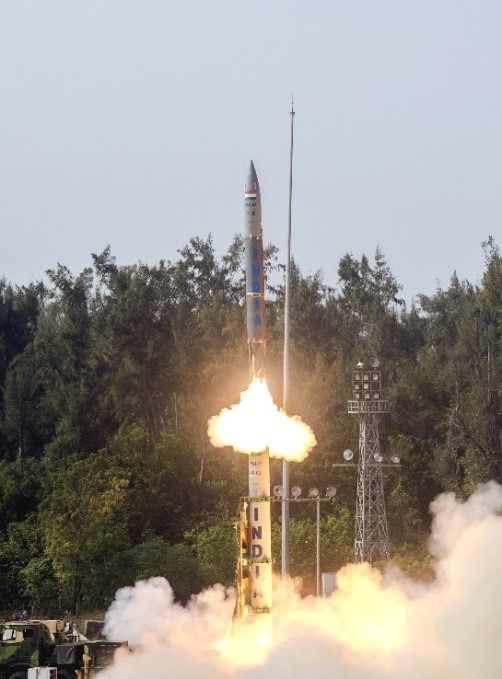 The Agni Prime or Agni P is a solid-fuel, two-stage, canister launched MRBM. The SSM is the sixth variant in the Agni series. It is both a rail and road-mobile missile. The missile is envisaged as an improved replacement for both the Agni I & II variants presently in operational service. Agni P boasts of a number of upgrades including composite motor casing which has a consistently higher performance factor when compared to metallic motor casing, resulting in higher propulsion efficiency and significant weight reduction (upto 50% less than other variants). The variant also incorporates third-stage MaRV capabilities and newer guidance technologies earlier incorporated in Agni IV & V. The MaRV deploys four delta fins for manoeuvrable re-entry, to avoid existing BMD and achieve higher strike accuracy. The SSM has an operational range of 1000 to 2000 km with 1500 to 3000 Kg HE, nuclear or Thermobaric (high temperature sustained explosion) payloads, delivered either as a single warhead or as two Multiple Independently Targeted Re-entry Vehicles (MIRV). The range of Agni P allows it to effectively straddle the ranges of Agni I & II and to strike almost all strategic targets and known nuclear vector sites in Pakistan, with a significant capability against China’s Missile Base(s) in Southern China, including that at Kunming in Yunnan Province, if suitably deployed! The Agni P underwent its maiden test-flight on 28 June 21 from AKI, wherein it carried two MIRV payloads. This was followed by the second successful test-flight on 18 December 21. It also finds mention that the Agni P might form the base for development of a ‘Carrier-Killer’ missile akin to the longer-range Chinese People’s Liberation Army Rocket Force DF-26 Missile. 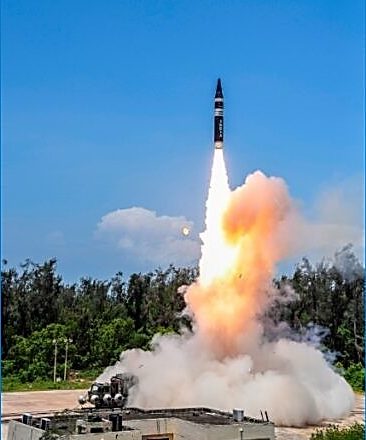 First Flight-Test of AGNI P from its TEL at AKI: Source- defenceview.in

Salient characteristics of these SSMs are enunciated in the table below:- 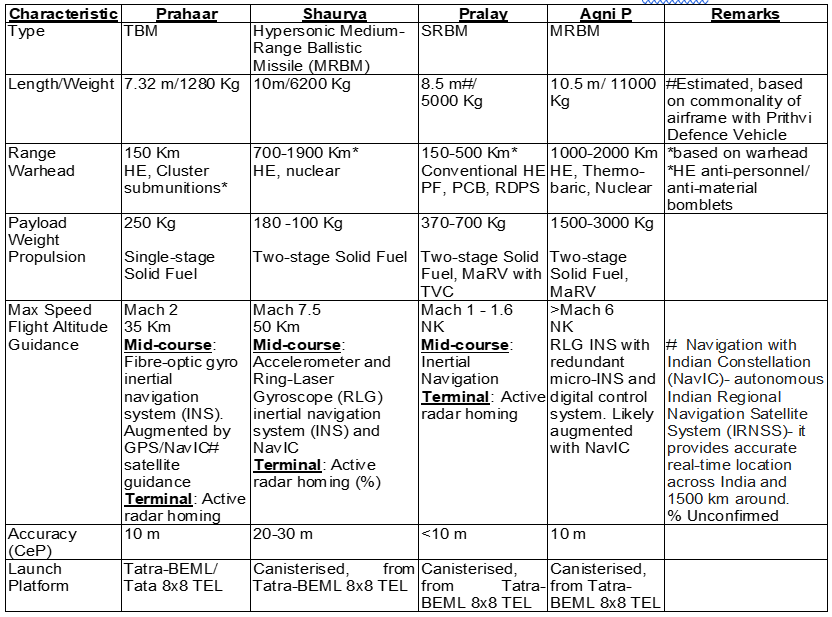 With the inclusion and operationalisation of the vectors enunciated above, India’s SSM family has now achieved the capability to strike targets across the entire conflict continuum- from the tactical depth right upto the adversary’s heartland. India’s’ SSMs can be launched from a wide range of platforms, including the entire nuclear air, land and sea triad.  The ostensible development of ‘Carrier Killer’ technology will successfully thwart China’s designs, if any, of aggressive deployment of carrier battle groups in the vicinity of India’s waters, aimed at usurping dominance over the Indian Ocean Region.