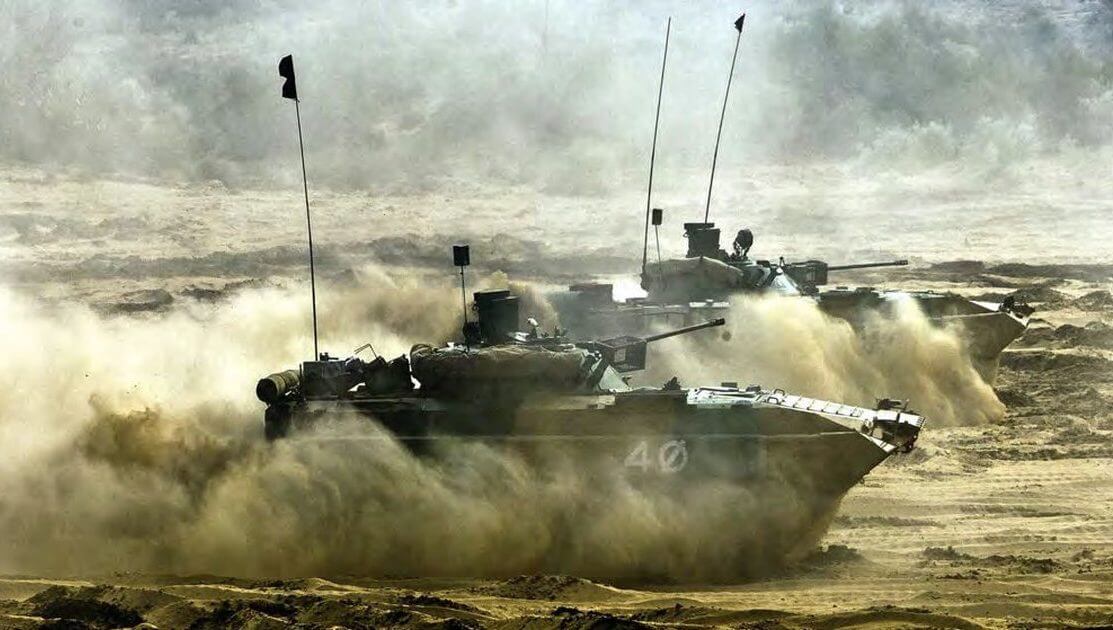 The Infantry Combat Vehicle (ICV) has traditionally been one of the  indispensable bulwarks of the Indian Army’s combat potency along the Western Front from the mid- 1970s through the 1980s. While the presence of armoured combat vehicles in the high reaches of Ladakh is not new, it was not until Operation Falcon saw the induction of Mechanised Infantry into Ladakh and North Sikkim in the 1980s, did we sit up and take formal notice of the imperative role of this Arm in High Altitude Areas (HAA) as well. The increasing requirement of mechanized forces along our Northern Borders was further underlined during the Doklam and Galwan crises against China. These burgeoning operational requirements have put an unavoidable strain on the current ICV resources, both in terms of numbers and operational viability of the current equipment. This need spurred the realization of having an indigenous ICV with cutting edge weaponry and support systems, that would remain the mainstay of the Indian Army’s ICV fleet through the first half of this century. Thus was born the concept of India’s Futuristic ICV (FICV) Program!

The Path of the FICV Program

Proposal for the FICV Program was mooted by the Indian Army (IA) and approved in 2008 under the Make Category of Defence Procurement Procedure (DPP) – 2008, with upto 90% funding for prototype by the end-user (Ministry of Defence {MoD}/ IA). Post Acceptance of Necessity, Expression of Interest  (EoI) was issued in 2010 to a number of firms including the Ordnance Factory Board (OFB). The MoD, which had invited bids for about 2600 FICVs under the project in early 2011, planned to shortlist two of the contending firms by July 2011, without success. In December 2012, Russia offered the BMP- III (with improved armament, fire control, power pack and ammunition handling) to India if the FICV project was shelved. India did not agree to the same and rejected Russia’s offer for the BMP-III. A revised EoI was issued in March 2014, to which six firms responded, including OFB. Consequently, shortlisted firms were to  develop prototypes of the FICV in 24 to 36  months, which again did not see fructification. In 2018, the  FICV project was shifted to Make II Category under DPP -2016, wherein no funding is required to be made from MoD, with a view to expedite the project/ promote Make in India initiative in the Defence Sector. Post these delays, a Request for Information (RFI) has now been issued by the Indian  Army on 23 June 21 for 1750 FICV (Tracked) in line with the Defence Acquisition Procedure (DAP)- 2020, under the ‘Make in India’ and ‘Atmanirbhar Bharat’ programs.

The RFI as above, has been issued with an aim to finalise Service Qualitative Requirements (SQRs) for the FICV, decide the procurement category under the DAP and identify Indian vendors to commence supply of the equipment within two years of award of contract/ supply order. The RFI includes the Gun/ Command/ Command & Surveillance versions of the FICV (Tracked) in the ratios of 55%/20%/25% respectively. A three-stage induction model over 18 to 20 years is envisaged as under:-

The FICV should have an operational life of at least 32 years with one overhaul/ repair intervention. The system is to operate in plains, deserts and HAA (upto 5000 m), by day and night in obtainable weather conditions, with at least 2.5 tons of combat load and operational range of 400 km on-road/ 300 km cross-country.  The operational requirements expected include destruction of intended targets; provision of protected mobility to the crew and troops (referred to as sticks) in above conditions/ in a contaminated environment and provision of fire support to dismounted sticks. The FICV should be transportable by road, rail and air and be modular in design, to ensure adaptability for subsequent product improvement. The vehicle specific configuration is as under:- 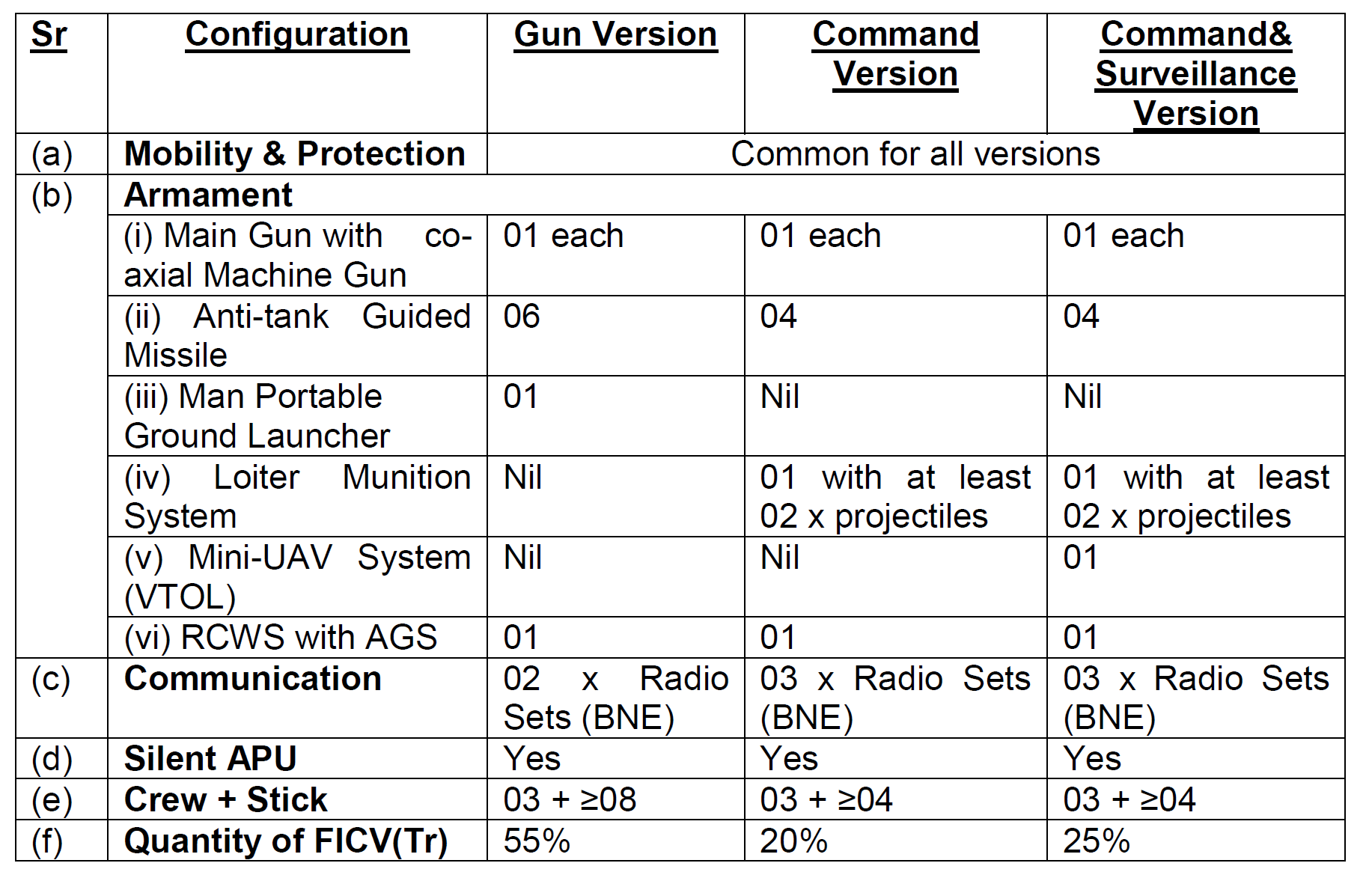 While a number of indigenous light utility/ light armoured wheeled vehicles and auxiliary/ support vehicles are in service, the indigenous combat vehicle products include the M4 from the Kalyani Group, the Kestrel jointly developed by TATA Motors and DRDO and the Straton Plus  from Mahindra & Mahindra. These are by and large wheeled Armoured Personnel Carriers ( APCs) with options of add- on armament and do not fit into the mould of a true- blood ICV, with desired characteristics as enunciated above. That having been said, it is evident that these and other indigenous private firms now have the industry base to consider augmentation/ upgradation of their technological capabilities towards contending for the FICV project.

While a global scan of the leading ICVs from around the world may not be a one stop solution for the Indian Army’s FICV requirements, such a snapshot will serve as a pragmatic ‘heads-up’ of present niche technologies in vogue across ICV platforms, thus offering a fair idea of the kind of technology available to realise the aims of the FICV program. Apropos, a global scan of the world’s ‘top’ five ICVs is presented below, with a table of comparative characteristics appended.

The Puma IFV (ICV) is a joint venture of Krauss-Maffei Wegmann and Rheinmetall of Germany. The Puma has been in service with the German Army since 2015. The product is reputed to be the world’s ‘most protected’ IFV and offers three separate protection classes, which are wholly or partly interchangeable. The Puma is equipped with a welded armour hull and add-on 4th generation modular composite armour (AMAP) for protection against kinetic energy threats and shaped charges. The ICV has a soft- kill system to detect incoming missiles and neutralise their steering systems. The  power pack provides a 1,100 hp output, which is one of  the most powerful in use on an IFV today. With this, the Puma has a higher power to weight ratio than even the German Leopard 2 Main Battle Tank. 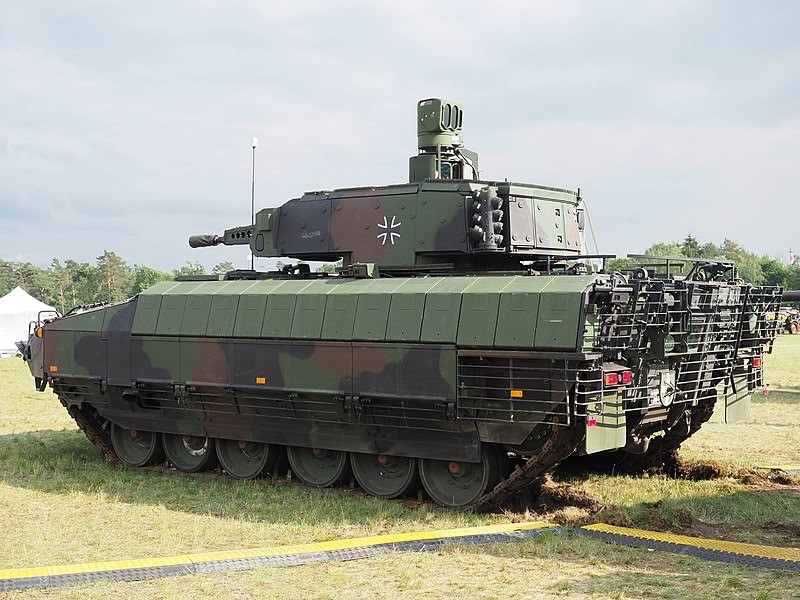 The Lynx, also of Germany, has been developed by Rheinmetall and has two variants- the KF31 and the heavier KF41. The latter is being reviewed here. One of the key features of the Lynx is the integration of operationally proven sub-systems with a high technology readiness level, which reduces development time and costs. Another key feature of the Lynx design is the distinct modularity- Lynx variants are designed upon a common drive module upon which specialist role specific equipment is installed.  The Lynx’s protection consists  of basic ballistic steel armour protection and  add- on composite armour in the form of advanced modular armour and an active protection system, which can destroy incoming threats with a directed- energy beam at upto 10 m. The acoustic shooter localisation systems (ASLS) aboard the vehicle can detect, localise and display hostile shooter location. The Lynx KF 41 has the same transmission system as that of the Puma. 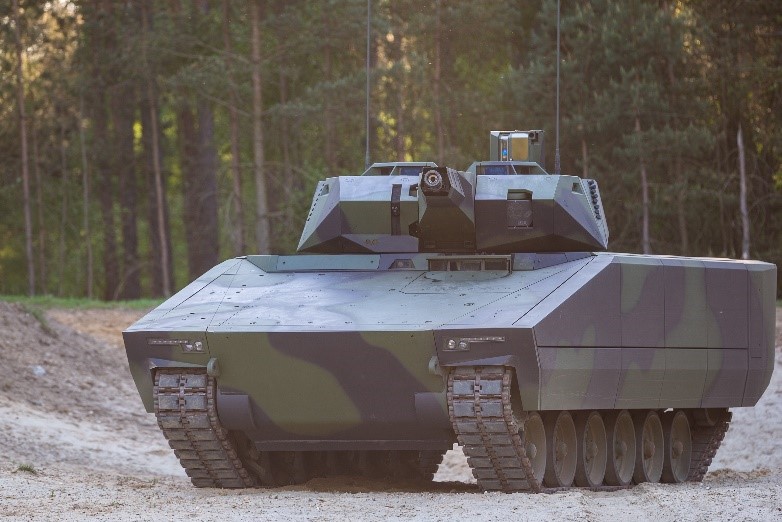 The KF- 21 is a South Korean ICV manufactured by Doosan Corporation and has been in operational service with the South Korean Army since 2009. The chassis is constructed entirely out of fiberglass, thus significantly reducing its weight and increasing power to weight ratio without a large power pack. It is assumed that this IFV has multi-layer armour with ceramic/ glass fibre/ Aluminium alloy composite armour. The K- 21 can also be fitted with an active protection and countermeasures suite. With the Battle Management System, the crew and stick can be instantly notified about the external environment, thus greatly enhancing situational awareness. The ICV is also equipped with a pontoon system for additional buoyancy in amphibious role. (Read about K-21 105 Light Tank in our article https://chanakyaforum.com/k21-105-light-tank-solution-from-hanwha/) 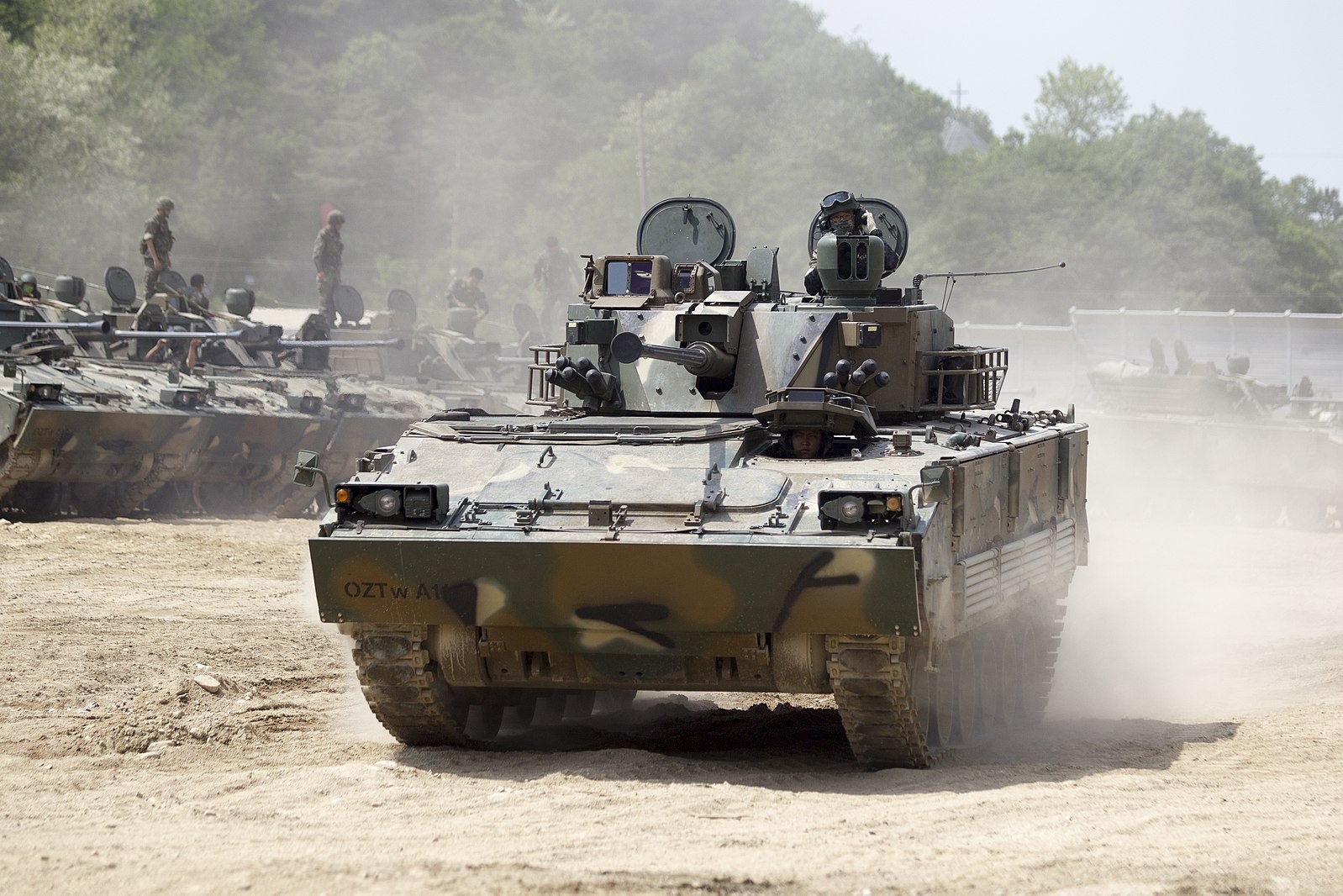 The Combat Vehicle 90 (CV-90) has been designed jointly  by Sweden’s Defense Materiel Administration, Hägglunds (a subsidiary of BAE Systems) and Bofors and entered operational service in Sweden in 1993. Subsequently, the ICV has had four product improvements from Mark I to IV, with the latter being evaluated here. The ICV has a welded steel armour hull with add- on ceramic armour for all- round protection and slat (cage) armour for protection against tandem warheads. The CV-90 was designed with heat- absorbing filters and other technology to minimise radar and infra-red signature. The vehicle has a silent APU which lends to stealth in operation.                  The vehicle is known for its good mobility over snow and marshy areas. The Mark IV version is equipped with ‘iFighting’ augmented reality system, which fuses and prioritises sensor data, thus greatly improving situational awareness. It is also one of the first ICVs with a qualified active protection system with 4th Gen architecture, capable of classifying and eliminating threats. 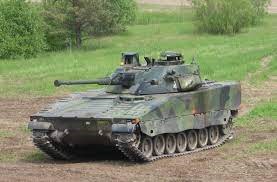 While the Kurganets-25 IFV of Russia, developed by Kurganmashzavod, a BMP manufacturing firm and seen as the successor of the BMP-3, is yet to enter full- fledged operational service, this ICV ranks higher on features than its nearest competitor, the M2 Bradley and has thus been included here. The ICV is a clean sheath design and shares little in common with the BMP-3. The ICV features weld on armour with add-on modular Aluminium alloy armour and explosive reactive armour (ERA) modules. The Drozd-2/ Afganit active protection system is capable of offering protection against ATGM and rocket threats. An adaptive suspension system allows the height of the ICV to be varied between 100 to 500mm. All the armament of the ICV is remotely controlled by its digital fire control system, which allows automatic selection of targets. The 360º camera system provides ‘see through armour’ capability to the ICV. 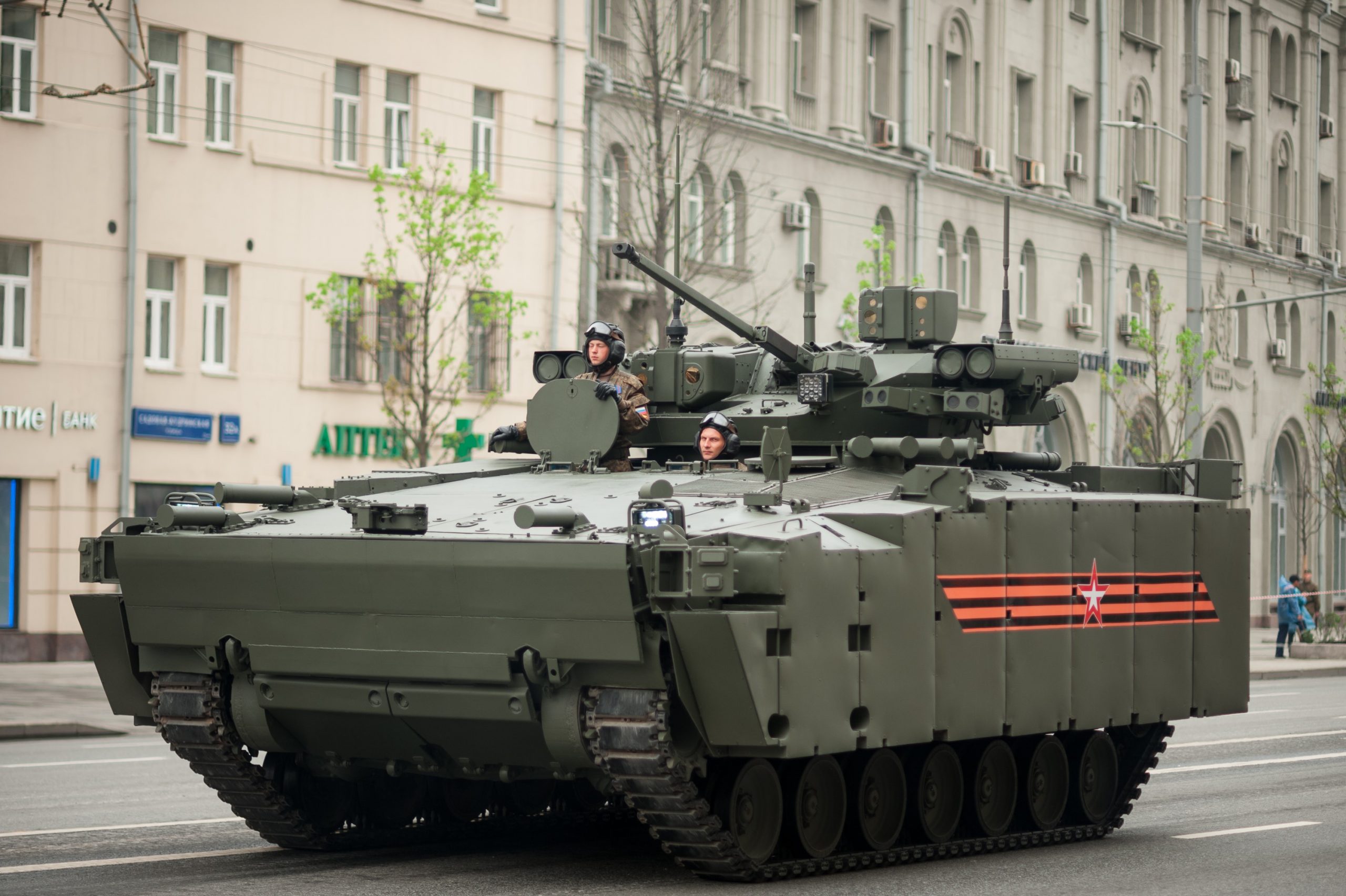 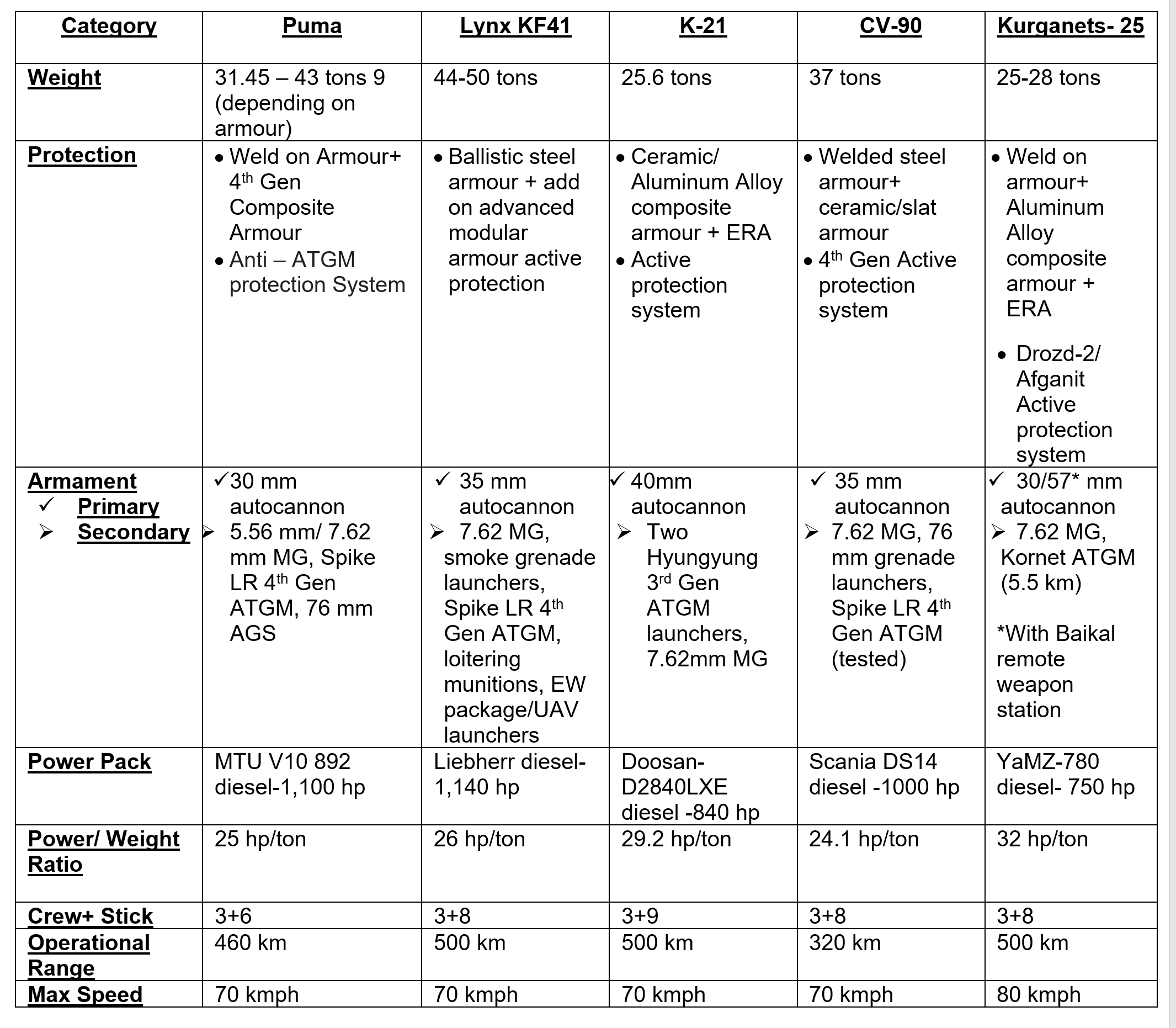 The Indian Army’s FICV Program aims to make the mechanized forces self-sufficient in carriage of mounted infantry, while adding substantial fire power with matching mobility in the form of the FICV. This venture could either be in the Indigenously Designed, Developed and Manufactured (IDDM) category or the Buy & Make (Indian) category, which would be a function of the time available for design/ development as stipulated, or the willingness of foreign vendors to collaborate in the development of the FICV program. Be this as it may, the FICV is envisaged to augment and enhance the Indian Army’s lethal and competitive edge and to help in retaining the operational advantage so gained, well into the coming decades.

Disclaimer
The opinions expressed in this article are the author’s own and do not reflect the views of Chanakya Forum. All information provided in this article including timeliness, completeness, accuracy, suitability or validity of information referenced therein, is the sole responsibility of the author. www.chanakyaforum.com does not assume any responsibility for the same.
Author

Chanakya Forum is now on Telegram. Click here to join our channel (@ChanakyaForum) and stay updated with the latest headlines and articles.

Jun 30, 2022
[…] weapons of the combat platform, thus completing the APS loop (types of APS have also been covered @ https://chanakyaforum.com/indias-futuristic-infantry-combat-vehicle/ and […]

The New-Breed of Protected Mobility Vehicles– Do They Fit the Bill? - Chanakya Forum