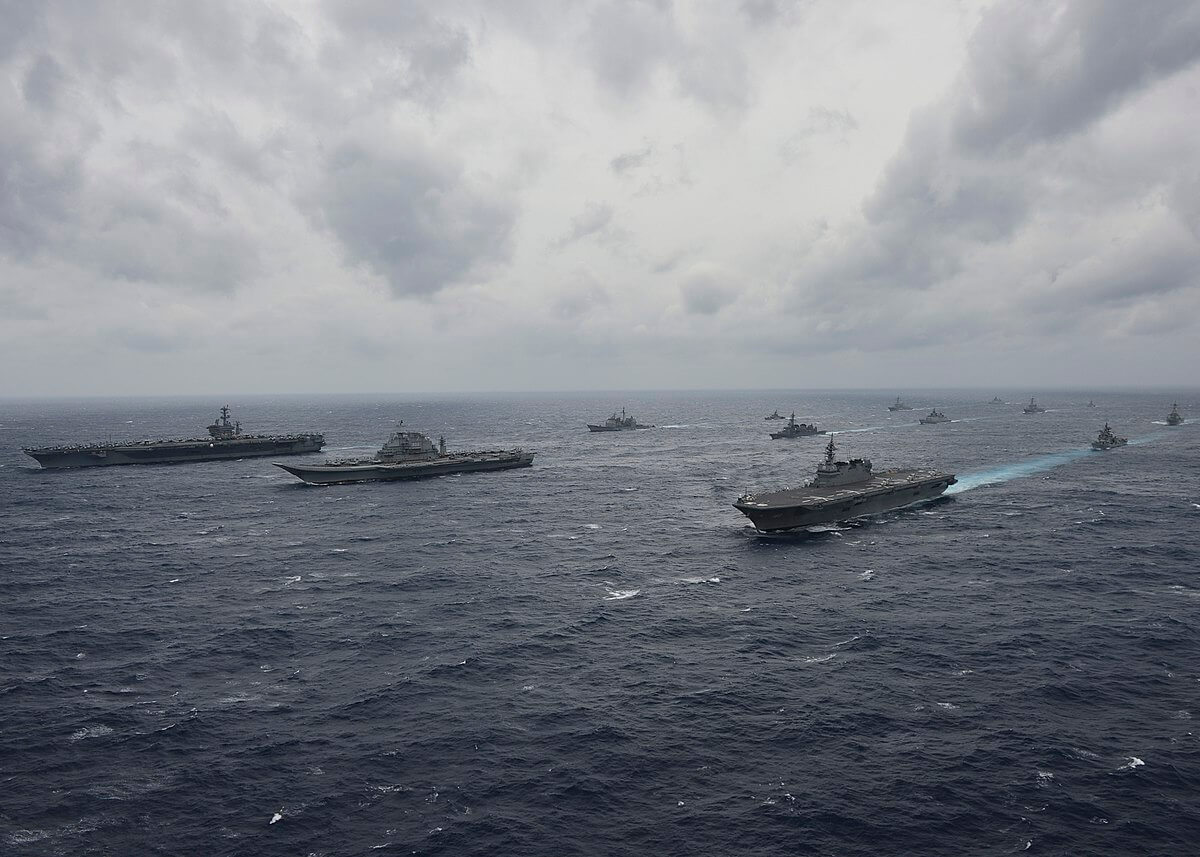 The Indian Navy inducted two American Predator drones on lease from the United States on 26 November 2020. Capable of operating for more than 30 hours, the drones are supposed to operate from INS Vikramaditya, aircraft carrier, to carry out surveillance in the Indian Ocean region. At about the same time, another significant development concerning the acquisition of advanced hardware by the Indian Navy from the United States was the arrival of ninth P-8I surveillance aircraft on 18 November 2020.[1] This is the first of four additional aircraft, which were ordered by India after an initial order for eight aircraft was fulfilled.

It is not as though only the Indian Navy is receiving advanced military platforms from the United States. Fast-paced acquisition of hardware from the United States has become a defining feature of progressive strengthening of India-US bilateral relations since the last decade and a half. The initial orders comprised C130 Super Hercules and C17 Globe Master III transport planes for the Indian Air Force, and first set of P8I surveillance and anti-submarine warfare (ASW) aircraft for the Indian Navy. Subsequently, the flood gates seem to have opened, with M777 light howitzers being acquired for the Indian Army; Chinook heavy lift and  Apache AH-64E multirole combat helicopters for the Indian Air Force; and MH60 R naval multi-role helicopters being ordered for the Indian Navy, in addition to the Predator UAVs and additional P8Is being inducted, as mentioned above.

At this stage, it would be in order to remind the readers that these are only a few of major equipment, amongst a plethora of other arms, ordnance and weapon components which are being sourced from various American companies.

This cooperative partnership can be seen through three distinct but inter-related strands. While the first one, of course, is the recent provision of advanced technology military equipment to the Indian Navy; the second relates to a massive increase in scope and expanse of maritime exercises like ‘Malabar’ – of which the US and Indian Navies are major constituents. Third and perhaps the most important strand is the building of consensus on matters of national policies driving bilateral defence and security cooperation, which has seen the two countries sign four foundational agreements after prolonged negotiations. Each of these strands is looked at, a little more closely in succeeding paragraphs.

Transfer of equipment and technology from the United States to India has seen the most spectacular increase, as well as garnered maximum visibility. The Indian Navy has particularly benefited from this arrangement. The Force’s surveillance, anti-ship attack, ASW, electronic warfare (EW) and maritime domain awareness (MDA) capabilities have become much better with the infusion of modern ‘state-of-the-art’ systems. These surveillance aircraft, drones and helicopters couldn’t have come at a more opportune time, as the previous generation aircraft like the Russian Tu-144 and Sea King helicopters – which undertook these roles – were on the verge of being phased out from the service.

Their timely replacement with more capable platforms from the United States has not only prevented the substantial loss of operational capability but also accorded asymmetrical operational advantage to the Indian Navy with vis-à-vis other nations in the IOR littoral. Multi-role capabilities of each of the equipment – P8I, Predator drones, MH60R helicopters – also afford numerous options for their flexible employment. The flexibility of these platforms is not limited to the maritime domain only; as the P8I aircraft are also being employed to support the Indian Army’s concept of operations in the ongoing stand-off in Eastern Ladakh.[2] Similar employment pattern is envisaged for Predator drones too.[3]

Maritime exercises are another important facet of cooperation between India and the United States. ‘Malabar’ series of exercises which commenced in 1992 has grown in every aspect of jointmanship, synergy and inter-operability. The exercises became multilateral when the Japanese Maritime Self Defence Force (JMSDF) and Australian ships joined in ‘Malabar’ 2007 exercises. While subsequent editions of exercises continued without Australian participation, ‘Malabar-2020’ exercises once again brought the navies of all the four countries together, under the much-publicised rubric of ‘Quad’ grouping – which has gained great traction in last five years.

This year’s ‘Malabar’ exercises were conducted in an environment of uncertain security situation prevailing in the Indo-Pacific region.  In order to highlight the increasing salience of India in the region, these exercises were scheduled on both seaboards of India in November 2020 – first in the Bay of Bengal, then in the Arabian Sea, a fortnight later. Aircraft carrier strike groups of India and the United States – led by INS Vikramaditya and USS Nimitz respectively – participated in the second phase, along with naval ships from Japan and Australia.[4] The expansive nature of Malabar 2020 exercises thus, showcased newfound resolve amongst these four countries, to jointly address the emerging challenges in the Indo-Pacific region. In a way, this edition of ‘Malabar’ exercises can be said to have heralded a tectonic shift in the regional power balance.

This is also the second time that USS Nimitz carrier strike group has exercised with the Indian Navy this year – the first instance being in July 2020 in the Andaman Sea. One Indian Navy ship has also been participating in the Rim of the Pacific (RIMPAC) multilateral exercise hosted by the United States off Hawaii since 2014 – 2020 being an exception due to Corona pandemic.

The United States sees India as a net security provider in the Indian Ocean; and has accordingly sought to strengthen the Indian capacity for this role.  Towards this, India and the United States have been working at diplomatic and military levels to formulate policy prescriptions which would help formalise their defence and security cooperation.

Apart from the ongoing Defence Technology and Trade Initiative (DTTI) established in 2012, the closeness of shared military interests has become evident, by both countries signing four foundational agreements. First, the ‘General Security of Military Information Agreement’ (GSOMIA) was signed in 2002. This was followed by the signing of the ‘Logistics Exchange Memorandum of Agreement’ (LEMOA) in August 2016, after negotiations lasting well over a decade. The Indian Navy, by virtue of its very role of sailing across the World and interacting with foreign Navies, arguably benefits the most from provisions of LEMOA.[5]

The ‘Communications Compatibility and Security Agreement’ (COMCASA) – to enable secure encrypted communications between the two countries’ militaries – was the third one to be signed in September 2018. The ‘Industrial Security Annex’ (ISA) – an extension to the GSOMIA – was also signed in 2019. Finally, the long-pending ‘Basic Exchange and Cooperation Agreement’ (BECA) – to facilitate sharing of geo-spatial intelligence, digital maps and satellite imagery for military applications – was signed during the 2+2 dialogue in end-October 2020, barely a week before the US Presidential elections. This agreement will enable precision targeting and ensure pin-point accuracy of missiles fired from ships, aircraft or submarines.

Looking Forward to Next Level

India-US Defence cooperation in recent times – particularly in the maritime domain – has certainly progressed in the right direction and a crisp pace. However, there is a need to push the envelope to the next higher level. The next level, with regard to the export of advanced platforms, could look at the transfer of strategic platforms like nuclear attack submarines (SSNs). There is sound logic to this proposal; as such platforms when acquired from another Country, per-force, tie India down to that country for the life cycle of that platform, thus closing the window for any other country – including the US – for that prolonged-time period. The same argument holds for other equipment like HALE UAVs and UCAVs.

Also, while Malabar series of exercises are well and truly creating synergies between the two navies, and also those of Japan and occasionally, Australia; a sense of hitting a proverbial glass ceiling could take effect after doing all that could have been done. To avoid this sense of stasis setting in, it is suggested that both, India and the US Navies could engage in operational scenario-building exercises at the regional level against evolving and hypothetical challenges. These could then be played out by the two navies in theatre level exercises at sea – in the Indian Ocean Region, to start with. These exercises could also include other constituents of the ‘Quad.’

To achieve such a heightened level of jointness between the Indian and US navies, much closer integration of resources and procedures, would be required. Therefore, appropriate enabling policy provisions to facilitate an utmost degree of cooperation – in sharing of operational data, MDA picture, all-encompassing intelligence and EW measures – will have to be drawn up, agreed upon, and signed. Only then can the Indian and US Navies – in close coordination with other similarly placed naval Forces of ‘Quad’ – can ensure maritime security and safety in the Indian Ocean Region towards mutual benefit; and indeed to the benefit of all others who conform to international laws, conventions and legally tenable customary practices.

[3] India Today, ‘Navy inducts Predator drones on lease from the US for Indian Ocean surveillance,’ ibid.

[5] Provisions of LEMOA enable ships and aircraft of one Country to replenish and take fuel from facilities in the other country during port calls, joint exercises, training tasks and HADR missions.