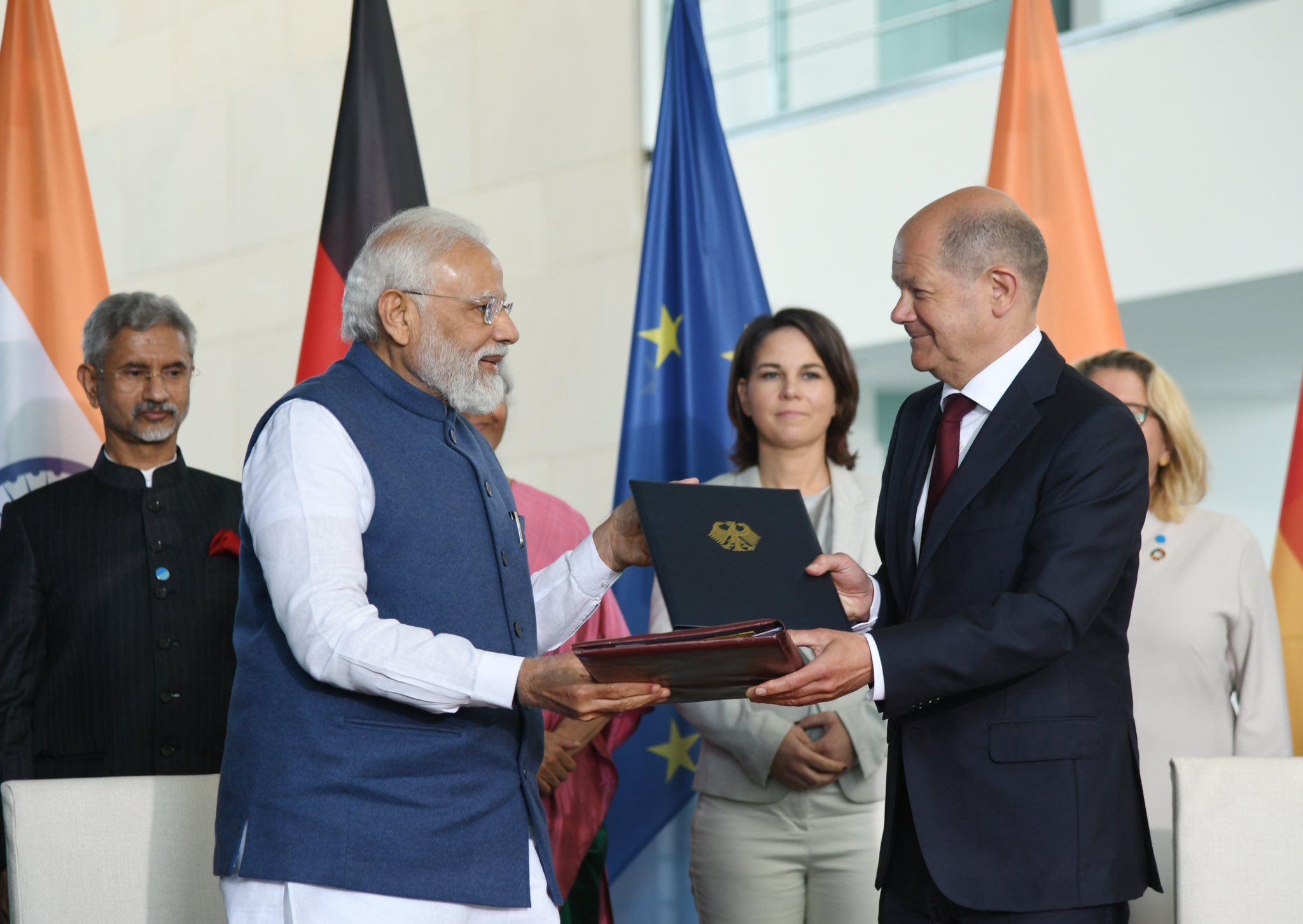 Berlin, May 2 (PTI) India and Germany on Monday stressed the significance of a free, open and inclusive Indo-Pacific and underlined the importance of unimpeded commerce and freedom of navigation in accordance with international law.

The assertion by the two countries came in a joint statement issued after Prime Minister Narendra Modi and German Chancellor Olaf Scholz co-chaired the sixth round of Inter-Governmental Consultations. In his remarks at the joint press event with Modi, Scholz called the Indo-Pacific as one of the most dynamic global regions which is also confronted with a number of conflicts and challenges.

Germany is going to maintain and intensify its various commitment on the ground and India is amongst its very important partners in the region, he said. Modi and Scholz strongly condemned terrorism in all its forms and manifestations, including any use of terrorist proxies and cross-border terrorism, the statement said.

They called upon all countries to work towards rooting out terrorist safe havens and infrastructure, disrupting terrorist networks and financing in accordance with international law, including international humanitarian law, it said. The two leaders further called for concerted action against all terrorist groups, including groups proscribed by the United Nations Security Council (UNSC) 1267 Sanctions Committee.

Both sides also committed to continued exchange of information about sanctions and designations against terror groups and individuals, countering radicalism, and terrorists’ use of the Internet and cross-border movement of terrorists. “The 6th India-Germany Inter-Governmental Consultations were productive. Chancellor Scholz and I, along with Ministers, officials from Germany and India discussed ways to boost cooperation in areas like sustainable development, mobility, economic growth and more. @Bundeskanzler,” Prime Minister Modi said on Twitter.

India and Germany also emphasised the importance of upholding international standards on anti-money laundering and combating the financing of terrorism by all countries, including in the Financial Action Task Force (FATF) which will advance and strengthen the framework for global cooperation and reinforce the fight against terrorism, the statement said. The two sides also stressed the significance of a free, open and inclusive Indo-Pacific, recognising the centrality of ASEAN.

They acknowledged the policy guidelines for the Indo-Pacific of the german government, the EU Strategy for cooperation in the Indo-Pacific and the Indo-Pacific Oceans Initiative enunciated by India. Both sides underlined the importance of unimpeded commerce and freedom of navigation in accordance with International Law, notably the United Nations Convention on the Law of the Sea (UNCLOS) 1982, in all maritime domains including in the Indian Ocean and the South China Sea, the statement said.

The assertion comes amid increasing Chinese assertiveness in the region. China has territorial disputes with many countries in the strategic Indo-Pacific region. The Chinese government claims nearly all of the disputed South China Sea, though Taiwan, the Philippines, Brunei, Malaysia and Vietnam all claim parts of it. Beijing has built artificial islands and military installations in the South China Sea. Beijing is also involved in a maritime dispute with Japan over the East China Sea.

As an important milestone in Germany’s growing engagement with the Indo-Pacific region, both sides welcomed the port call by the German Navy Frigate ‘Bayern’ in Mumbai in January 2022. Germany also agreed to welcome an Indian Naval ship on a friendly visit to a German port next year. Both governments underlined the importance of an effective rules-based international order with the United Nations and the fundamental principles of international law as enshrined in Charter of the United Nations at its core, including respect for the sovereignty and territorial integrity of all states.

They reaffirmed their governments’ determination to strengthen and reform multilateralism to tackle current and future challenges, to defend peace and stability globally, to bolster international law, and to defend the fundamental principles of peaceful settlement of conflicts and the sovereignty and territorial integrity of states. Modi and Scholz highlighted their commitment to an economic recovery from the COVID-19 pandemic that safeguards the planet.

As long-standing members of the ‘Group of Four’, the two governments are committed to intensify their efforts to spur on an overdue reform of the UN Security Council in order to make it fit for this purpose and reflective of contemporary realities, the statement said. Germany reiterated its steadfast support for India’s early entry into the Nuclear Suppliers Group.

Both sides acknowledged the close cooperation between the G7 and India during the current German G7 Presidency including on just energy transition. On Afghanistan, both sides expressed their serious concern about the humanitarian situation, the resurgence of violence, including targeted terrorist attacks, the systemic violations of human rights and fundamental freedoms, and the hampered access of girls and women to education.

They reiterated strong support for a peaceful, secure and stable Afghanistan and confirmed to continue to provide humanitarian assistance to the people of Afghanistan. India and Germany also reaffirmed the importance of UNSC Resolution 2593 (2021) which, amongst others, unequivocally demands that Afghan territory not be used for sheltering, training, planning or financing terrorist acts.

They also agreed to continue close consultations on the situation in Afghanistan.