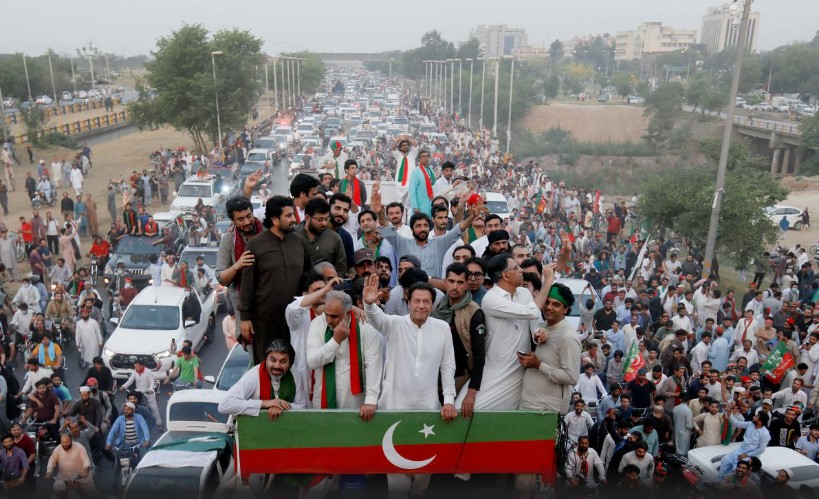 Islamabad, May 28 (PTI) A former chief justice of the Supreme Court, a retired army general and a leading businessman persuaded ousted Pakistan prime minister Imran Khan to not go ahead with the planned sit-in at the end of his party’s long march in Islamabad, a media report said on Saturday.

Khan launched his ‘Azadi March’ on March 25 to press for fresh elections in the country with the announcement to stage a sit-in in Islamabad but later called it off, saying the government would be happy if he goes ahead with it as it would lead to clashes between the people, police and the army. “I had decided that I will sit here until the government dissolves assemblies and announces elections, but of what I have seen in the past 24 hours, they (govt) are taking the nation towards anarchy,” he told his thousands of supporters at the ‘Azadi March’ at Jinnah Avenue on Thursday morning.

The surprise decision by Khan not to go ahead with the sit-in at the end of the long march left almost everyone baffled — foes and allies alike. According to the Dawn newspaper report, there is convergence on one thing — the manner in which it all ended, at least for now, carried clear indications of who made it happen. The report quoting a source said that those who acted as a go-between included a former chief justice, a leading businessman, and a retired general. “It was not an easy task given Imran Khan’s obstinacy and the fact that he had invested a lot of effort into it,” the source privy to the negotiations said.

Though the source did not share the chronology of the negotiations, it appeared from the discussion that they continued late into Wednesday night and probably into the early hours of Thursday, the report said. Khan agreed to go back, without staging the planned sit-in, on the assurance that the date for the dissolution of the assemblies and fresh general elections would be announced in June.

Ousted prime minister Khan on Thursday gave a six-day deadline to the Shehbaz Sharif government for dissolving provincial assemblies and announcing fresh general elections, warning that if the “imported government” failed to do so, he would return to the capital with the “entire nation”. “My message for the imported government is to dissolve assemblies and announce elections, otherwise, I will come back again to Islamabad after six days,” he said on Thursday.

According to the Dawn newspaper report, the general perception is that the military had to ultimately play its role to prevent things from getting out of  control. Former National Security Adviser retired Lt Gen Naeem Khalid Lodhi candidly admits that he too agrees with this. “There is a strong possibility of positive interference by the military to prevent chaos and seek a return of semblance of political stability so that the process for resuscitating the economy could begin,” Lodhi said.

Another retired general, on the condition of anonymity, said there was a realisation in the top brass that no one at the helm of affairs would be able to escape responsibility if matters were to go in a wrong direction. The biggest challenge for the military, a source claimed, was to open up communication channels with Khan, especially in view of their frayed relations. But, as the former prime minister proceeded with the long march plans, a sense of urgency was felt everywhere and multiple channels were employed to bring him around.

Fissures between the former government and the military began late last year after the establishment decided to end all support that it had been extending to the Khan-led PTI government. The then opposition would point fingers at ‘selectors’ — a euphemism used by them to blame the military for helping PTI form the government. “It was decided that the military would not play a role in the political affairs,” a source said. This withdrawal of support was, however, misconstrued by Khan as the military siding with his opponents.

That’s how “neutrals” began to feature in the former prime minister’s political statements. His view was that he was righteous and the rest were evil and hence the military should continue supporting him, the report said. Lt Gen Faiz Hamid’s transfer and the appointment of Lt Gen Nadeem Anjum as the ISI chief — which many believe caused the eventual breakup — was actually a consequence of the military’s decision to distance itself from political affairs, said a political source, who had watched the episode from close quarters.

Khan, who was ousted from power last month through a no-trust vote, had apparently lost the support of the Army after he refused to endorse the appointment of the ISI spy agency chief last year. He has been claiming that the no-trust motion against him was the result of a “foreign conspiracy” because his independent foreign policy and funds were being channelled from abroad to oust him from power. He has named the US as the country behind the conspiracy, a charge denied by Washington.