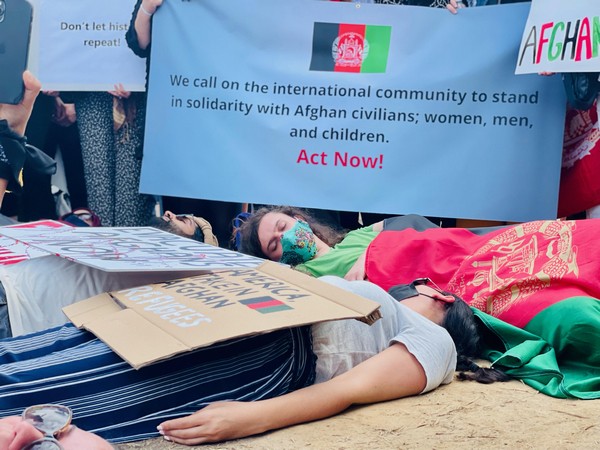 Washington [US], August 16 (ANI): People with ties to Afghanistan blamed President Joe Biden for betraying the people of the war-torn country and demand for sanctioning Pakistan as hundreds of people protested Sunday afternoon outside the White House.

The protests were after the presidential palace in Kabul was “handed over” to the Taliban, vacated just hours ago by government officials, including President Ashraf Ghani who has fled the country. Discussions are underway among top White House advisors for how President Biden should address the deepening crisis in Afghanistan, officials said Sunday, but no final decision has yet been reached about whether the President should return to Washington from his planned August vacation at Camp David.

President Joe Biden has authorised on Sunday an additional 1,000 US troops for deployment to Afghanistan, raising to roughly 6,000 troops to ensure safe evacuation. “The women of Afghanistan will have no freedom. We do not want to go back to the burqa’s that is not freedom,” Farzana Hafiz told ANI.

Hafiz lives in Northern Virginia but her home country is Afghanistan. As she broke down, she said it’s been hard to watch what’s happening from 7,000 miles away. “My family is there and I’m dying every minute,” Hafiz said. “Since last night I haven’t slept yet. I couldn’t sleep. It’s a tragedy for my people. I can’t sleep.”

Hafiza says her 21-year-old nephew was on the verge of escaping from Afghanistan. “He was to get his visa and he would then come to us, but now we don’t know what lies in his future.” The United Nations Security Council will meet regarding Afghanistan on Monday morning, UN Secretary-General Antonio Guterres is expected to brief the Council, with private consultations to follow.

Hamdard Zaffari, a former journalist from Afghanistan who even worked for the United Nations, said there is plenty of blame to go around for the US’ 20-year debacle in Afghanistan. “I have my extended family back home but I feel for the 35 million people who are in Afghanistan, it’s not just about us but it’s about peace because the Taliban will retaliate and destroy humanity,” Zaffari said.

The situation is deeply personal and difficult for the expatriates living away from their home country. Many gathered at the protest said that they counted on the success of Western forces and were living with the hope that one day the United States would take action against Pakistan for its alleged duplicity and proxy war. The diaspora unified and slammed the alleged Pakistan-sponsored terrorism in Afghanistan.

“Pakistan sponsors Taliban and the world Needs to wake up to that,” Hafiz concluded. (ANI)