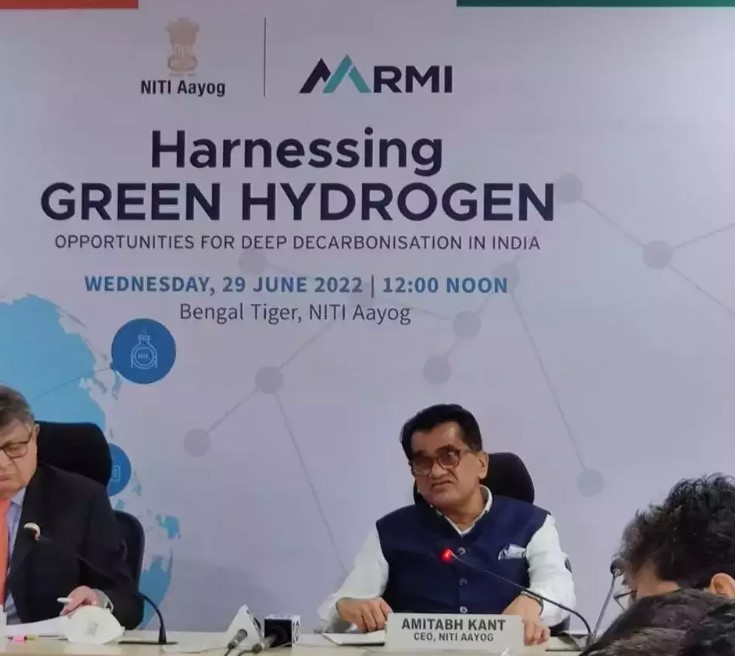 A new report released today by NITI Aayog highlights that green hydrogen can substantially spur industrial decarbonisation and economic growth for India in the coming decades. The report was launched by Shri Suman Bery, Vice Chairman, NITI Aayog  and  Shri Amitabh Kant, CEO, NITI Aayog. Harnessing Green Hydrogen: Opportunities for Deep Decarbonisation in India provides a pathway to accelerate the emergence of a green hydrogen economy, which is critical for India to achieve its net-zero ambitions by 2070.

The report, co-authored by NITI Aayog and RMI, underscores that green hydrogen—produced by renewable energy through electrolysis of water—will be crucial for achieving decarbonisation of harder-to-abate sectors such as, fertilisers, refining, methanol, maritime shipping, iron & steel and transport. It further states that with emerging global momentum on hydrogen, India can situate this decarbonisation opportunity not just within the context of a low-carbon economy but also as an enabler of energy security and economic development for the nation.

Speaking on the occasion, Shri Suman Bery, Vice Chairman, NITI Aayog said,” An important message of the report was that green hydrogen can potentially provide a replacement of fossil fuels in industrial processes.” He added, “ The next steps at the policy level could involve arriving at the correct mix between mandates/regulations and price instruments.”

Shri Amitabh Kant, CEO NITI Aayog, made a brief presentation on the report. He said that the report was an outcome of detailed study spread over a year.  He highlighted the importance of green hydrogen from the point of view of energy security and the need to achieve size and scale to push down costs of green hydrogen. He remarked that, given the right policies, India can emerge as the least cost producer and bring down the price of green hydrogen to US$ 1 per kg by 2030.

While hydrogen can be produced from multiple sources, India’s distinct advantage in low-cost renewable electricity means that green hydrogen will emerge as the most cost-effective form. The report concludes that hydrogen demand in India could grow more than fourfold by 2050, representing almost 10% of global demand. Given that the majority of this demand could be met with green hydrogen in the long term, the cumulative value of the green hydrogen market in India could reach US $8 billion by 2030.

Highlighting the opportunity, Clay Stranger, RMI Managing Director, said that there is significant global interest in green hydrogen and countries are in the first stages of formulating a strategy and this will ultimately decide the winners and losers of the hydrogen economy. The report can become a reference for policy making in India.

NITI Aayog’s partner for this report, RMI, works for the transformation of  global energy systems through market-driven solutions to align with a 1.5°C future and secure a clean, prosperous, zero-carbon future for all. It works in the world’s most critical geographies and engages businesses, policymakers, communities, and NGOs to identify and scale up energy system interventions that will cut greenhouse gas emissions by at least 50 percent by 2030. Partner institutions play a critical role in creating a knowledge ecosystem for NITI Aayog. NITI Aayog engages with partners to jointly work on key policy issues and leverages expertise in respective areas.