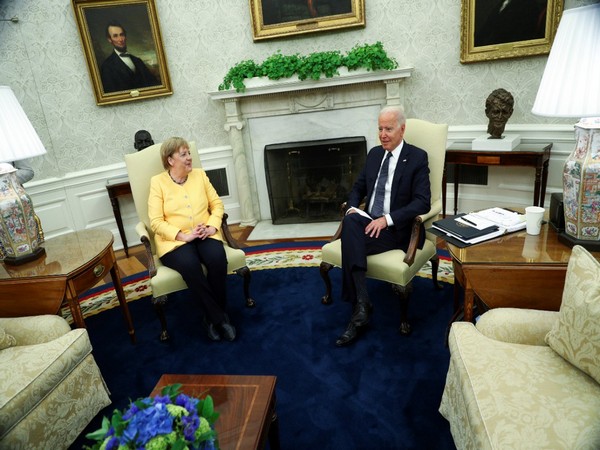 Washington [US], July 16 (ANI): German Chancellor Angela Merkel on Thursday met with US President Joe Biden to discuss a range of issues including Climate change and COVID-19 vaccines.

According to CNN, it is likely to be Merkel’s final appearance at the White House before she steps down from her long-held position this fall, CNN reported.

The ongoing dispute between the United States and Germany over a Russian gas pipeline, called Nord Stream 2, is expected to play out between the two leaders in the Oval Office on Thursday, according to senior administration officials.

Climate change, Covid-19 vaccines, Russian cyberattacks, Ukraine and shoring up their democracies are also topics on the agenda, an official said.

Upon her arrival in the Oval Office, Biden called Merkel a “personal friend, as well as a friend to the United States.”

“We have a full agenda ahead of us. We’re going to be meeting alone for a while and we’re going to bring in some of our key staff. And one of the things that I want to talk about is the enduring friendship the chancellor has been so responsible for nailing down, and making sure it continues. And we’re ready to dive in. The cooperation between the United States and Germany has been strong, and we hope to continue that and I’m confident we will,” he said.

The visit comes just three months before Merkel leaves her role as chancellor of Germany in October, after having served in the position for more than 15 years. Elections to replace the “chancellor of the free world” are in September.

Earlier in the day, Merkel attended a breakfast hosted by Vice President Kamala Harris at the Naval Observatory.

She is the first foreign leader Harris has hosted at her official residence since moving in.

They discussed “domestic and international issues including current challenges, the history between the two counties and future endeavours,” according to a White House official. (ANI)