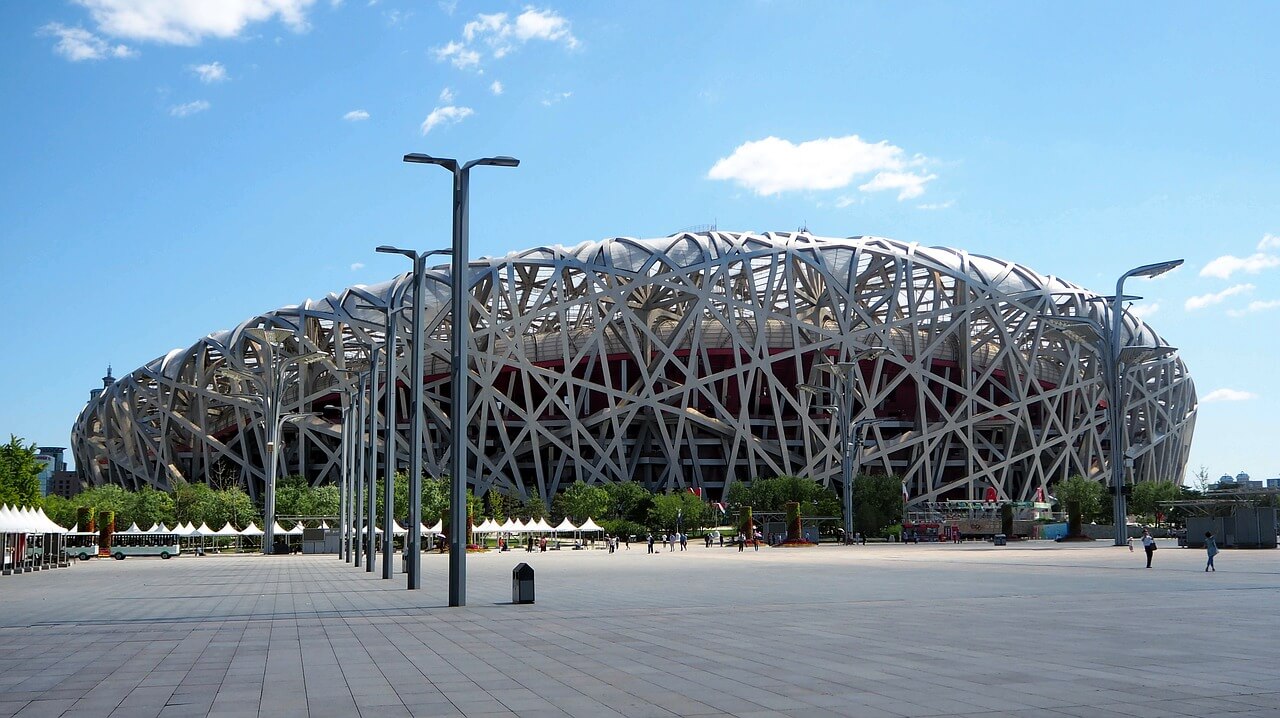 “Green Olympics, High-tech Olympics and People’s Olympics”, the theme of the Olympic Games Beijing 2008, was to be the first Olympics hosted by China spending a record $43 billion. In the run-up to the Games, there were calls for a boycott over the country’s human rights records, concerns for Beijing’s notorious smog and far and wide angry pro-Tibet protests. To cut down on emissions, over a thousand coal mines were closed and up to a million cars per day were banned from the streets of Beijing. China also prioritized the use of renewable energy, equipping all seven main Olympic stadiums with solar-powered generators. Even Green Peace complimented China for “improving city infrastructure and using leading energy-saving technologies in venues.”

In retrospective, it showcased China’s position and potential in the modern world, leaving a profound legacy, an attempt to obtain a soft power victory. The 2008 Summer Olympics became a symbol of China’s rejuvenation, and through the extravagant opening ceremony, the Chinese government showcased the nations historical glory and new achievements. The blockbuster event featured thousands of artists that performed carefully choreographed sequences, had a total audience of more than 1 billion viewers; it was the most-watched Olympic opening ceremony in history, far surpassing that of London 2012 and  Rio 2016. Beijing had invested heavily in state-of-the-art construction and infrastructure projects, such as the Bird’s Nest Stadium. It also recruited the help of some 400,000 city volunteers and 100,000 game-time volunteers to strengthen ties between the Chinese government and the public.  Cumulated with significant global financial crisis of 2008, in which China remained untouched, the 2008 Olympics proclamation that China had “arrived”, on the world stage, and which was described by The Guardian as “China’s coming out party as a major world power”.  There was seemingly a reassurance to the world that a rising China poses no danger!

Beijing is the only city ever to have obtained rights to host both the Summer and Winter Olympics. The Winter Olympics with 109 events over 15 disciplines in 7 sports are scheduled to be held from 04 to 20 February 2022 reinforcing Chinese Communist Party’s (CCP) success in economic growth and organizational expertise. The estimated budget for the games is nearly US$4 billion. There was a surge in spending to prepare China for the upcoming 2022 Winter Olympics. In 2016, China’s leaders put forth the National Construction Plan of Winter Sports Infrastructure, which outlined a goal to build 650 skating rinks and 800 ski resorts (complete with fake snow) by 2022.

The Winter Games are not at the same pedestal as the summer ones, yet they carry an important message for the world. China, despite its enormous infrastructural development globally under the Belt and Road Initiative (BRI), has to often work to cultivate a positive image among the global community. Such sports event will provide China opportunity to showcase itself, as a benign nation and hence bolster its international reputation. Recently, President Xi Jinping had complimented the Beijing Olympic organizers, while International Olympic Committee President Thomas Bach has called the preparations in Beijing “almost a miracle.” A very large number of Western conglomerates have been enthused at the prospects of obtaining sponsorship of the games, and obtain a share in the pie!   Airbnb secured a £500m sponsorship of the Olympics starting with the Beijing Games. The digital campaign will include concurrent pictures of the typical accommodation available to Airbnb customers. Other major multinational sponsoring companies for the Beijing Olympics include Allianz, Coca-Cola, Samsung, Intel, Visa International, Omega, Atos and Panasonic.

Thirteen years ago, the Olympic slogan was “One World, One Dream”, and though the official slogan for 2022 has yet not been revealed, the Games promotional slogan is catchy ‘Joyful Rendezvous Upon Pure Ice and Snow’ (纯洁的冰雪 激情的约会).  The emblem of the Olympic Winter Games Beijing 2022 Inspired by 冬, the Chinese character for “winter” and is entitled ‘Winter Dream’.  Since 2008, China’s GDP has grown from $4.6 trillion to $14.3 trillion.  In recent years, Xi’s Belt and Road Initiative, as well as trade deals with the European Union and across Asia, have tied the global economy ever more tightly to Beijing.  The 2008 China and 2021/22 China are two wholly different entities. China has pledged roughly half a billion doses of its vaccines to 69 countries and two international organizations and sold vaccines to another 28. China has emerged from the Covid-19 crisis stronger and more assertive. China recently declared it had reached its goal of overcoming “extreme poverty.”

As an aside, in the interim China is also planning the CCP’s Centenary celebrations on a grand scale.  The party’s official records show that it opened its first congress in Shanghai on July 23, 1921.  Among other planned activities, a grand gathering will be held, during which President Xi Jinping, will present the July 1 Medal and certificate to Party members who have made remarkable contributions. The CPC Central Committee will honour outstanding Party members, exemplary Party workers, and advanced community-level Party organizations. A commemorative medal will be awarded to those who have been Party members for 50 years or more and have consistently performed well in their roles. Major theme exhibitions will be held to showcase the CPC’s journey in the past century, as well as its achievements and experience. A major theatrical performance will be hosted. Seminars and symposiums, documentaries, special programs, TV dramas, music, dances and films will be created and promoted. Major publications, including a book on the CPC’s 100-year history, will be compiled and released. Party-themed publicity and education activities will be carried out for the public in the nation and worldwide. Various celebrations have been scheduled across China, especially at places of great significance in the history of the CPC.

Back to the Winter Games, the founders of the Olympic Charter envisioned the Games as being based upon ethical principles and centred on the preservation of human dignity. The Olympic Charter prohibits demonstration or political, religious or racial propaganda.  The IOC has taken a step sideways by stating that “Awarding the Olympic Games to a National Olympic Committee does not mean that IOC agrees with the political structure, social circumstances or human rights standards in its country”.  In January 2020, the IOC had issued guidelines giving examples of what is forbidden at the Games, including displaying signs, wearing armbands and making gestures of a political nature such as kneeling.

The Winter Games of February 2022 are getting to be among the most controversial in Olympic history. Even in 2015, when the International Olympic Committee awarded the 2022 Winter Olympics, there was some criticism of China’s human rights record. In the course of last few months there have serious voices globally on repression of Uyghurs in Xinjiang.  A number of international activists have brought pressure on Olympic sponsors, sports federations, governments and athletes to shun what they are branding as the “Genocide Games” because of reported human rights abuses against Muslim Uyghurs, Tibetans and other minorities in China. Lawmakers in a number of major Olympic countries, including the Netherlands, Canada and the US, have recently said the 2022 Games should be taken away from China because of its repression of its Uighur Muslim minority in the north-western region of Xinjiang. The Dutch and Canadian parliaments have officially labelled the repression genocide. In January 2021, the US called the repression in Xinjiang ‘genocide’. On 22 March, UK, Canada and EU simultaneously declared sanctions against Chinese atrocities in the region, a serious comment on China’s human rights record.

There have been a chorus against repressive Chinese regime in Hong Kong.  The National People’s Congress (NPC) and the Chinese People’s Political Consultative Conference (CPPCC), called two sessions, in March 2021, were defiant of international criticisms of China’s human rights violations in the Hong Kong Special Administration Region (HKSAR). Defying global condemnation, the “Decision to Improve the Hong Kong Electoral System” was passed on 11 March, to tackle “existing loopholes and deficiencies” and to prevent “anti-China, destabilizing elements” from becoming part of HKSAR’s power structure. In the NPC a new electoral system for picking the HKSAR’s Chief Executive (CE) and members of its Legislative Council was unveiled, that for only “bona fide patriots” to lead Hong Kong’s executive, legislative and judicial departments. It is apparent that China is prepared to accept the agitation and the risks that are bound to follow in trying to “fix” Hong Kong.  There have been continued issues of revanchist and/ or repressive policies in Taiwan straits, Hong Kong and South China Sea. The imbroglio in Eastern Ladakh is yet not fully resolved.

China was seriously infuriated in 2008 prior to the Summer Games on the pro-Tibet protest. Mindful of the blowback happening globally, editor of the Global Times Hu Xijin had tweeted an implied threat in February 2021 that, “Boycotting 2022 Beijing Winter Games, an unpopular idea, will not receive wide support. IOC and athletes will both oppose it, and China will seriously sanction any country that follows such a call.”

Global Times had later published an editorial that had been categorical that China would “retaliate fiercely” against a boycott.

“If any country is encouraged by extremist forces to take concrete actions to boycott the Beijing Winter Olympics, China will definitely retaliate fiercely. China certainly has the resources and means to do that.”  That can count as a threat, geopolitically, as any in history!

That brings us on to prognosticating of the next ten months to the Winter Games. The Summer Games, postponed from 2020, should take place in July-August 2021 in Tokyo, Japan, with restrictions catering for continued COVID19.  With only six months to go thereafter, and the athletes practicing intensely, Governments will have to take a firm call on boycott or otherwise of the Winter Games.  In the interim, if China makes an aggressive move towards Taiwan, a more offensive posture in South or East China Seas, more news of Human Rights violations in Xinjiang or Tibet, or an offensive/ expansionist move at the Line of Actual Control with India, there is bound to be serious global geostrategic fall out, that might have repercussions on the Winter Games. Conversely, if countries boycott the Games, the Chinese anguish can stem out in many forms.

For China, Beijing Winter Games is a major issue of global prestige, of enhancement of soft power and of internal harmony.  The events of the next ten months will be interesting, to say the least!

Apr 04, 2021
The author has discussed threadbare the run up to the Beijing 2022 Winter Olympics in the light of international voices for “Boycotting 2022 Beijing Winter Games” because of human rights abuses against Muslim Uyghurs, Tibetans, and others. During Beijing 20o8 Olympics China showcased its might to the world through the extravagant opening ceremony, its historical glory, and achievements. Boycotting 2022 Beijing Winter Games is not likely to receive wide support. China meanwhile is also not likely to make any offensive move towards Taiwan or South China Seas in view of the repercussions on the Winter Games and the CCP’s Centenary celebrations.