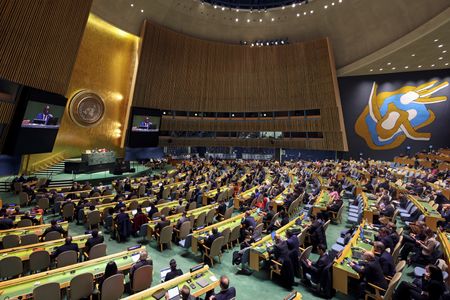 United Nations, Jun 10 (PTI) In a significant initiative, a resolution on multilingualism adopted in the UN General Assembly on Friday mentions the Hindi language for the first time, with India emphasising that it is imperative that the United Nations embraces multilingualism in a true sense.

The resolution adopted in the 193-member UN General Assembly, presented by Andorra and co-sponsored by over 80 nations including India, underlines the responsibility of the United Nations Secretariat towards “integrating multilingualism into its activities, on an equitable basis.” It recognises the efforts of the United Nations to use non-official languages, in addition to the six official languages – Arabic, Chinese, English, French, Russian and Spanish – where appropriate, for communications with specific local target audiences and emphasises the importance of multilingualism in the activities of the United Nations.

India’s Permanent Representative to the UN Ambassador T S Tirumurti, speaking in the General Assembly hall, noted that this year, “for the first time, the resolution has a mention of Hindi language.” “The resolution encourages the UN Department of Global Communications to continue disseminating important communications and messages in official as well as in non-official languages, including in the Hindi language,” he said.

“The resolution also mentions Bangla and Urdu for the first time. We welcome all these additions. It is imperative that multilingualism at the United Nations in a true sense is embraced and India will support the UN in achieving this objective,” he said.

Tirumurti stressed that multilingualism is recognised as a core value of the UN and expressed gratitude to Secretary-General Antonio Guterres for prioritising multilingualism.

Tirumurti highlighted that India has been partnering with the UN Department of Global Communications since 2018 by providing an extra-budgetary contribution to mainstream and consolidate news and multimedia content in Hindi language.

“As part of these efforts, ‘Hindi @ UN’ project was launched in 2018 with an objective to enhance the public outreach of the United Nations in Hindi language, and to spread greater awareness about global issues among millions of Hindi-speaking population around the world,” he said.

Last month, India contributed USD 800,000 towards efforts to continue to expand the use of Hindi in the United Nations.

The Indian mission had said that the Government of India has been making continuous efforts to expand the use of Hindi in the United Nations.

Tirumurti recalled a UN Security Council resolution adopted in its first session on February 1, 1946, which had stated that “the United Nations cannot achieve its purposes unless the people of the world are fully informed of its aims and activities.” The resolution also requests the Secretary-General to continue his efforts to ensure that multilingualism, as a core value of the United Nations, is not undermined by the measures taken in response to the liquidity situation and the coronavirus disease.