EXCALIBUR: Precision Targeting On The Battlefield 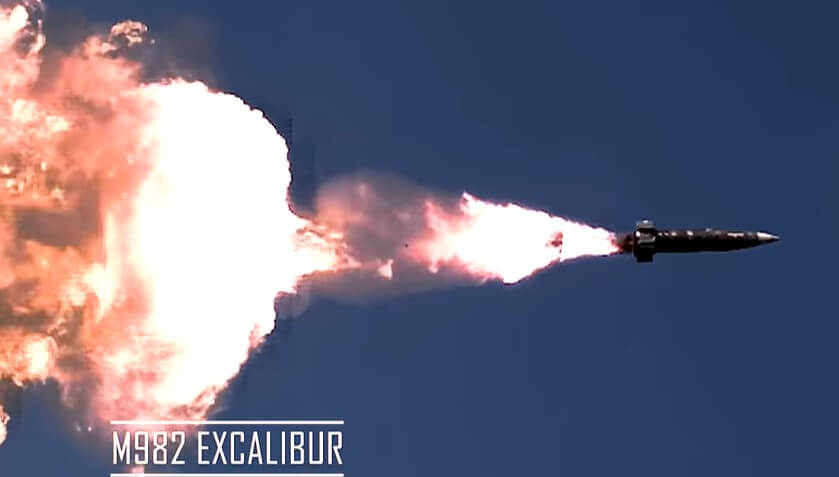 Bosnia-Herzegovina, Kosovo, Afghanistan and Libya witnessed the lethal effect of precision weapons that are true force multipliers in the modern battlefield, where NATO used these projectiles to devastation. The increasing pressure of world opinion against unjustified collateral damage in conflicts, regardless of scale the world over, have catalysed the development and employment of Precision Guided Munitions (PGM). Such is the improvement in kill ratio and reduced collateral effects with the use of PGM that operations the world over have  achieved unprecedented economy of use of these assets – Operation Deliberate Force in the Bosnia-Herzegovina conflict witnessed extremely high hit statistics (about 700 PGM fired to approximately 400 Bosnian Serb targets destroyed).

As an extended member of the PGM family, the Laser Guided Bomb (LGB)  preceded the story of the archetypal PGM, wherein the Paveway II LGB was the principal PGM used in the Gulf War. As a statistic, the 48th Tactical Fighter Wing of the USAF alone destroyed 920 Armoured Fighting Vehicles (AFVs) using these munitions!

What is a PGM?

Any or all of the below mentioned open source definitions aptly define a PGM:-

A weapon that uses a seeker to detect electromagnetic energy reflected from a target and through processing, provides guidance commands to a control system that guides the weapon onto the target.

A missile, bomb or artillery shell equipped with a terminal guidance system. The terminal guidance unit is designed to sense emitted or reflected electromagnetic radiation and guide the munition onto its target.

The systemic sequence of target acquisition and engagement by a PGM enabled platform would broadly be  as follows:-

A typical PGM with active guidance (referring to munitions which emit energy that is reflected from the target for precision guidance; unlike munitions with semi-active guidance wherein this energy could take the form of a Laser beam emitted from another source i.e. a laser target designator) would consist of the following:-

The Excalibur Program commenced as an R&D program in 1992. The program initially featured development of unguided munitions and orders for the same by the US Army were modest, which further saw a decline in requirements with the advent of cheaper ammunition with similar capabilities.  The Kargil War of 1999 saw the Indian Army (IA) use the Russian Krasnopol Terminally Guided Munition (TGM) against bunkers of intruders with telling effect. This catalysed the development of the PGM under the Excalibur Program!

The Excalibur Program envisaged the development of  three Excalibur variants:-

The Program progressed through Trajectory Correctable Munitions (TCM) (wherein GPS coordinates of the shell are continuously relayed to an external command post which orders necessary in-flight corrections) from 2004 to 2006, till it achieved its present form.

Increment-1 represents the first production variant of the Excalibur and was intended for engagement of stationary targets. Testing for Increment Ia-1 (XM-982) with a range of 24 km, was completed in 2007, following which the US Army allowed emergent production for operational employment during the Iraqi Civil War. The Excalibur PGM was used in operations in Iraq for the first time in May 2007. Increment Ia-2  (M-982) was developed as an extended range round with resistance to GPS jamming. The variant achieved 40 km range during test firing and entered low- rate production in July 2007. This variant was operationally used for the first time in February 2008 in Afghanistan. The Ia Program was terminated in April 2014, after production of close to 6500 shells, thus paving way for full-scale production of the Ib variant.

Raytheon Missiles & Defense (RMD) was awarded the first contract of the 1b variant, with improved reliability and lower unit cost, in December 2012. A repeat order followed a year later, by which time close to 700 rounds had been fired in operations, thus establishing combat-reliability of the PGM. It is interesting to note that in February 2014, the US Army test-fired 30 Excalibur 1b PGMs from the Paladin and M-777 Howitzers at ranges from 7 to 38 km, achieving an astoundingly high consistency of within 1.6 m of the target. Such high accuracy and consistency achieved during the test, combined with a lethal radius of 50 m, translated into 100% hit/ kill probability!

The salient features of variants described above are enumerated in the table below:-

The Excalibur PGM incorporates a multi-mode Direct Action/Delay/Proximity Fuze that can be used against soft, fortified or armoured targets and troops in the open. The Excalibur uses canards/guidance fins that deploy after launch, facilitating a glide phase after the ballistic trajectory, thus permitting achievement of longer ranges before turning nose-down to engage the target in top-attack mode.  A simulated trajectory of the Excalibur is described in the figure below:- 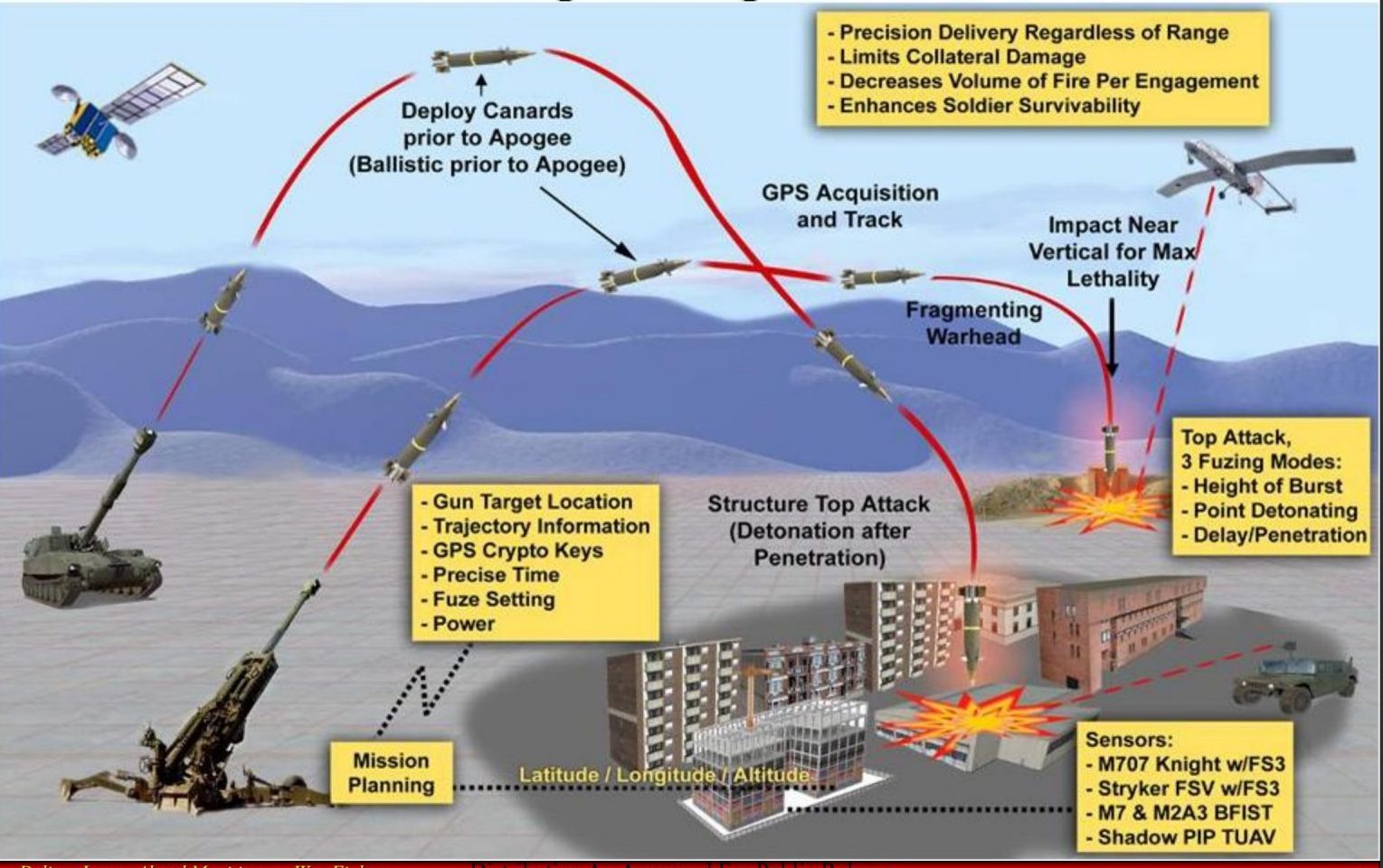 Raytheon Missiles & Defense (RMD) opines that “the Excalibur projectile is a ‘true precision weapon’, impacting at a radial miss distance of less than two meters from the target. Unlike ‘near precision’ guidance systems, the Excalibur weapon provides accurate first-round effects at all ranges in all weather conditions”. 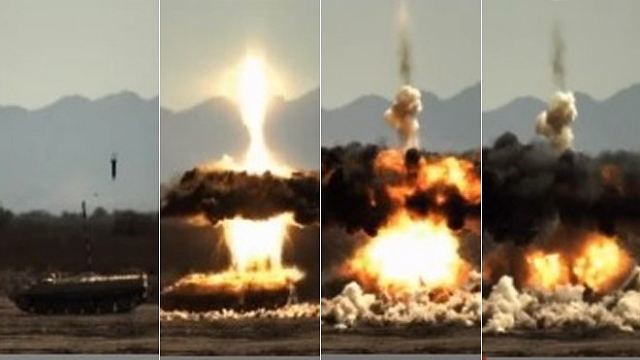 The present cost of one Excalibur PGM, as obtained from the OEM vide the US President’s Budget Request for FY 2021, is approximately US $ 1,12,800 or Rs 84,11,270/-, a high price for a conventional munition but justified by the manufacturers due to enhanced capabilities -the intended target profile for the Excalibur PGM includes personnel, armoured combat vehicles, soft skinned vehicles and reinforced concrete bunkers as close as 75 to 150m from own troops upto ranges of 70 km, with minimum collateral damage. This extended range is achieved through the use of folding glide fins, which allow the projectile to glide towards the target. One Excalibur PGM can achieve a direct hit on a target, whereas the same effect (direct hit) would probably take upto 50 conventional unguided artillery rounds. It needs no emphasis that in modern warfare, where physically congested conflict (and often urban) environments are the norm,  in turn necessitating small scale engagements to destroy or neutralise specific targets, high hit/ kill probability with negligible collateral damage would be central to operational planning and mission success. The Excalibur PGM adequately delivers on all these fronts.

India had placed an initial order of 1200 rounds of  the Excalibur PGM in October 2018 under the Emergency Procurement Procedure in order to add to the lethality of the M-777 Howitzer, 145 of which are being purchased from the US, under the Field Artillery Rationalisation Program. Further impetus was given to the procurement of the Excalibur PGM by India in wake of the Galwan clashes in May- June 2020. The Excalibur was inducted into the IA in December 2019 in order to enhance the Artillery’s capability for precision engagements close to built-up areas with minimal collateral damage. The ammunition was test-fired by the Artillery in Dec 2019 itself. In addition to the M-777 Howitzer, this ammunition can also be fired from the K9 Vajra Self- Propelled Tracked Howitzer.

Increment II (Smart) Projectile.   This variant is being developed for moving and time-sensitive targets. The variant would be a carrier munition and could carry either 65 dual purpose (anti- personnel and anti-armour) sub-munitions or two Search (Sense) and Destroy Armour (SADARM) munitions.

Increment III (Discriminating) Projectile.   These projectiles will incorporate target discrimination capabilities. The previous efforts to field such projectiles have been successful against fully exposed ‘benign’ targets but consistently unsuccessful against targets that employed active/passive countermeasures. This variant incorporates Automatic target recognition (ATR), which  is the ability to recognize targets objects based on data obtained from sensors.

Modern day conflict ridden environments the world over are seldom witness to the employment of large-scale massed firepower as a National effort. Instead, such conflict environments are characterised by the requirement of disproportionate dividends accruing from persistent surveillance and precision targeting. The Excalibur Program is the global frontrunner in bringing such capability within reach of field commanders to achieve tactical results, which in turn could reap strategic dividends.

Oct 12, 2021
awesome article on an awesome weapon thank you sir