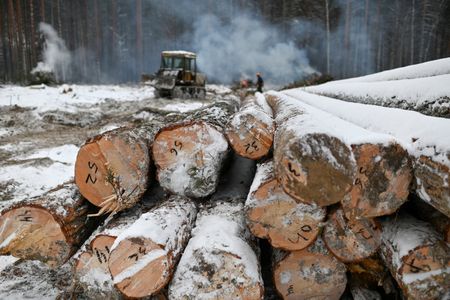 BRUSSELS (Reuters) -The European Union launched a challenge at the World Trade Organization on Friday to Russian export restrictions on wood products that the bloc says are illegal and harm its wood processing industry.

It is the second such EU complaint https://www.reuters.com/business/wto-review-eu-case-against-russian-measures-state-enterprises-2021-12-20 over Russia to the WTO in the past year and comes as the bloc and its Western allies threaten Moscow with strong financial measures if Russian troops invade Ukraine.

The European Commission, which oversees EU trade policy, said it had repeatedly engaged with Russia since the measures were announced in October 2020, but without success. They entered into force this month.

Russian President Vladimir Putin had ordered that exports of unprocessed valuable types of hardwood and coniferous trees be banned from the start of 2022 in a bid to support its own wood processors.

The EU takes issue with an increase of Russian export duties to 80% from its WTO commitment of a maximum of 13% to 15% for certain quantities of shipments.

In addition, the Commission said, Russia had reduced the number of border crossing points handling wood exports to the EU from more than 30 to only one, with Finland.

“The Russian restrictions are highly detrimental to the EU wood processing industry, which relies on exports from Russia, and create significant uncertainty on the global wood market,” the Commission said in a statement.

WTO challenges start with a formal period of consultations between the parties. If they do not resolve the dispute, the EU can request that a WTO panel rule on the matter.

Russia will submit its explanation to the Commision that EU complaints are ‘unfounded’ and Moscow’s actions comply with the WTO rules, the Russian economy ministry said in a statement to Reuters, without providing further details.

(Reporting by Philip Blenkinsop in Brussels and Darya Korsunskaya in Moscow; Editing by Alexander Smith and Jonathan Oatis)