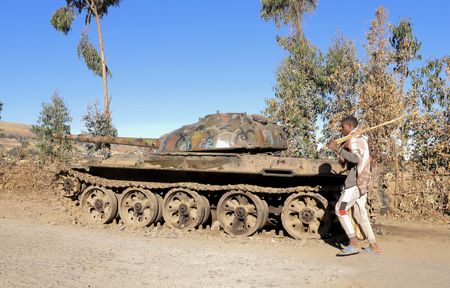 The Horn of Africa country has been gripped by war for more than a year, with the federal military and its allies battling forces loyal to the Tigray People’s Liberation Front (TPLF), the political party that controls Tigray.

This week two top U.S. diplomats flew into Addis Ababa to push for a ceasefire, trying to build on tentative signs of a thaw in relations between warring parties, including the release of political prisoners.

In an interview with state-affiliated media outlet Fana broadcast late on Friday, Ethiopian Defence Forces (EDF) deputy army chief General Abebaw Tadesse said the country would not be at peace until the TPLF was eliminated.

“Tigray is part of Ethiopia and no force will stop us from entering. We will enter and we will eliminate the enemy. There shouldn’t be any confusion about this,” he said.

“The people of Ethiopia shouldn’t think that it is over, it is not over. The main thing here is we have stopped because we have to prepare ourselves. This enemy is still there, and it has to be absolutely eliminated. We will not negotiate with them.”

The TPLF’s spokesperson, Getachew Reda, could not be reached for a comment on the military official’s remarks.

In a tweet on Thursday, when part of Abebaw’s interview was aired on Fana, Getachew said:”We are not losing sleep over Abebaw’s plan!”

Separately, air force chief commander Yilma Merdasa denied targeting civilians in the conflict, saying his forces have the technology to avoid doing so.

“The claims by TPLF that our air force is targeting civilians is a lie,” he said on Ethiopian Broadcast Corporation television.

TPLF spokesperson Getachew could not be reached to comment on this.

The TPLF says Abiy wants to end the country’s ethnically-based federal government system while Abiy says the TPLF is hungry to seize the national power it once held.

For months there has been an uneasy stalemate between the two sides, punctuated by sporadic fighting. TPLF forces control most of Tigray but are surrounded by hostile forces from neighbouring regions of Afar and Amhara which are allied with the federal military.

The conflict, which broke out in November 2020, has displaced millions and triggered widespread hunger.

In recent months there have been multiple diplomatic and political efforts to end it, including pressure from the United States.