Dredgers spotted off Cambodian base where China is funding work -U.S. think tank 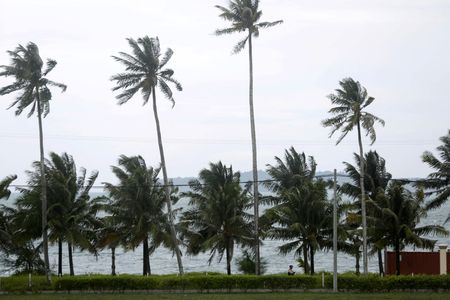 WASHINGTON (Reuters) -Dredgers have been spotted off Cambodia’s Ream naval base, where China is funding construction work and deeper port facilities would be necessary for the docking of larger military ships, a U.S. think tank said on Friday.

The United States, which has sought to push back against Beijing’s extensive territorial claims and military expansion in the South China Sea, reiterated its “serious concerns” about China’s construction and military presence at Ream. “These developments threaten U.S. and partner interests, regional security, and Cambodia’s sovereignty,” a spokesperson for the State Department said.

The report from the Centre for Strategic and International Studies (CSIS) think tank said the dredgers could be seen in photos released this month by the Cambodian government and in commercial satellite imagery. “Dredging of deeper port facilities would be necessary for the docking of larger military ships at Ream, and was part of a secret agreement between China and Cambodia that U.S. officials reported seeing in 2019,” the Asia Maritime Transparency Initiative at CSIS reported.

It cited a 2019 Wall Street Journal report that said the deal granted China military access to the base in return for funding facilities improvements. Last June, Cambodian media quoted Defence Minister Tea Bahn as saying China would help to modernize and expand Ream, but would not be the only country given access to the facility. AMTI said a Jan. 16 commercial satellite image showed two dredgers and barges for collecting dredged sand. It said other images showed both dredgers arriving between Jan. 13 and Jan. 15.

They were also visible in a photo posted on Tea Banh’s Facebook page following his Jan. 18 visit to Ream, it said, adding that the work “could mark a significant upgrade in the base’s capabilities.” “The shallow waters around Ream mean it is currently only able to host small patrol vessels. A deep-water port would make it far more useful to both the Cambodian and Chinese navies.”

AMTI said construction work had continued onshore, with land clearing in several locations in the southwest of the base since fall 2021 and said this and the dredging “indicates that the base is being prepared for significant infrastructure upgrades.” The State Department spokesperson said the United States urged Cambodia “to be fully transparent about the intent, nature, and scope of the project at Ream and the role the PLA is playing in its construction, raising concerns about the intended use of this naval facility.”

Last year, Washington sanctioned two Cambodian officials over alleged corruption at Ream and imposed an arms embargo and export restrictions on Cambodia over what it said was the growing influence of China’s military in the country, as well as over human rights and corruption.