Dialogue ‘only answer’ to settle disputes, says India as it abstains on UNSC resolution that ‘deplores’ Russian aggression against Ukraine 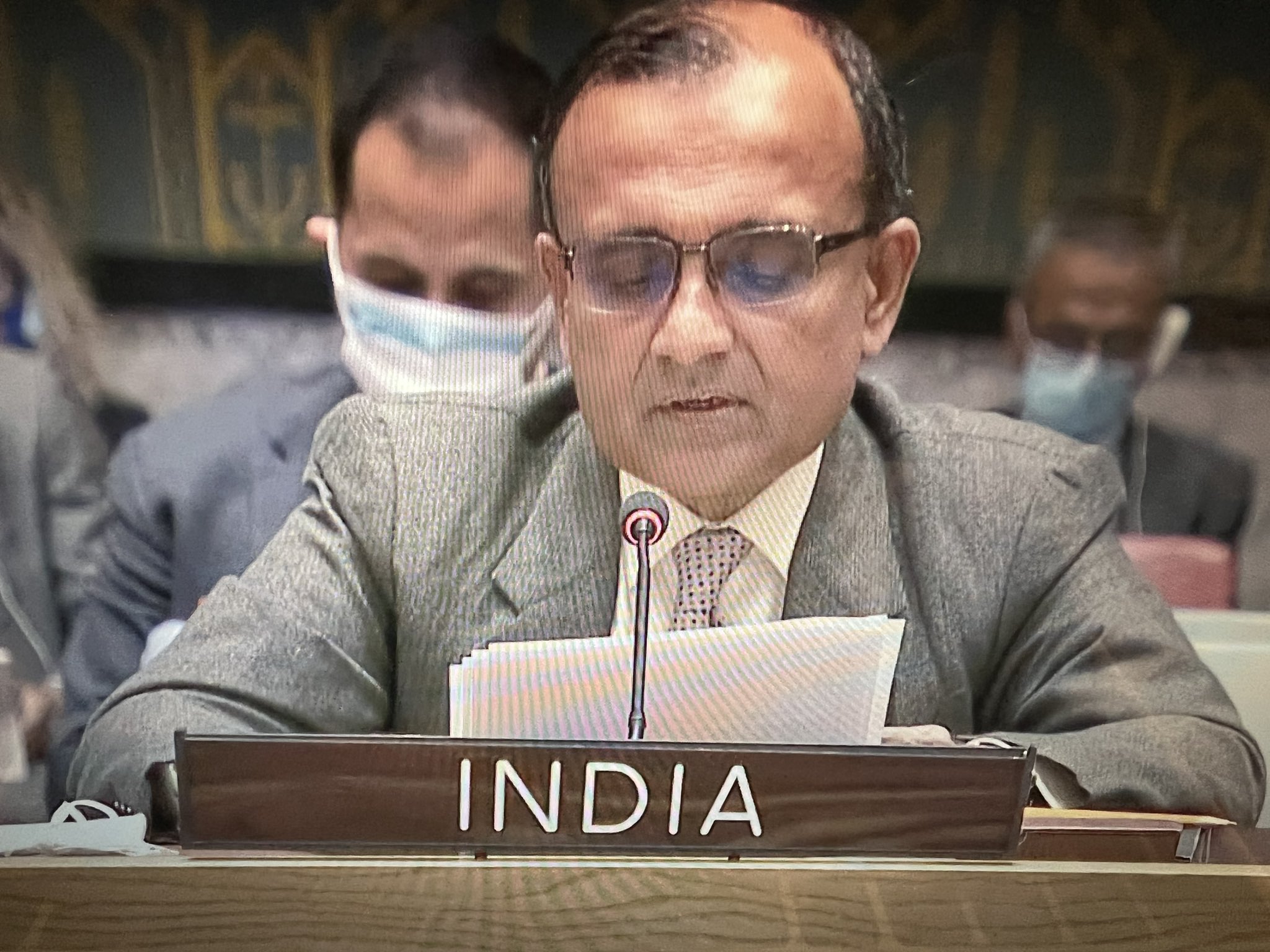 United Nations, Feb 26 (PTI) India abstained on a UN Security Council resolution by the US that “deplores in the strongest terms” Russia’s “aggression” against Ukraine, as New Delhi called for the immediate cessation of violence and hostilities and asserted that dialogue is the “only answer” to settling disputes.

The 15-nation Security Council voted on the draft resolution Friday afternoon by the US and Albania and co-sponsored by a “cross-regional” group of 67 UN member states, including Australia, Estonia, Finland, Georgia, Germany, Italy, Liechtenstein, Lithuania, Luxembourg, New Zealand, Norway, Poland, Romania and the United Kingdom.

India, China and the UAE abstained on the resolution, which received 11 votes in favour by Albania, Brazil, France, Gabon, Ghana, Ireland, Kenya, Mexico, Norway, the UK and the US. The resolution was blocked since permanent member Russia, and President of the Security Council for the month of February, used its veto. The resolution sought to isolate permanent and veto-wielding member Russia on the global stage after Russian President Vladimir Putin’s decision to launch an attack on Ukraine on Thursday. India is deeply disturbed by the recent turn of developments in Ukraine. We urge that all efforts are made for the immediate cessation of violence and hostilities, India’s Permanent Representative to the UN Ambassador T S Tirumurti said in the country’s explanation of vote in the Council.

Tirumurti also said India is deeply concerned about the welfare and security of the Indian community, including a large number of Indian students, in Ukraine. He said that no solution can ever be arrived at, at the cost of human lives.

Dialogue is the only answer to settling differences and disputes, however daunting that may appear at this moment. It is a matter of regret that the path of diplomacy was given up. We must return to it. For all these reasons, India has chosen to abstain on this resolution, he said. Tirumurti said the contemporary global order has been built on the UN Charter, international law, and respect for the sovereignty and territorial integrity of states. All member states need to honour these principles in finding a constructive way forward, he said.

India has so far refrained from condemning Russia’s actions against Ukraine. Russia, a permanent member of the Security Council, used its veto power and the resolution failed, as expected, but Western nations said the resolution seeks to show Moscow’s isolation on the global stage for its invasion and actions against Ukraine. All eyes were on how India will cast its vote on the resolution given that New Delhi has a historic and time-tested friendship with Russia. At the same time, India’s strategic and defence partnership with the US has grown at an unprecedented pace over the last decade and a half.

The UNSC meeting was delayed by two hours and there were some changes in the language of the draft resolution that was finally put to vote, some weakening aimed at garnering more support for the draft. The Council resolution, which condemned Russia’s February 23 declaration of the special military operation in Ukraine, reaffirms its commitment to the sovereignty, independence, unity, and territorial integrity of Ukraine within its internationally recognised borders. Permanent member China abstained, not using its veto power. An earlier version of the draft had contained language condemning the 23 February 2022 declaration by the President of the Russian Federation of a special military operation in Ukraine.

The final version of the draft that was put to vote removed the reference to the Russian president (Putin) as well as the mention of Chapter VII of the UN Charter, which states sanctions and authorisation of force. The final resolution also removed a stronger word condemns and instead used the word deplores for Russia’s aggression.

The resolution deplores in the strongest terms Russia’s aggression against Ukraine and decides that Russia shall immediately cease its use of force against Ukraine and shall refrain from any further unlawful threat or use of force against any UN member state. The resolution also said that Russia shall immediately, completely, and unconditionally withdraw all of its military forces from the territory of Ukraine within its internationally recognised borders.

US Ambassador to the UN Linda Thomas-Greenfield, before the vote said in the Council, that this is a “simple vote and those voting no or abstaining align themselves with the aggressive and unprovoked actions of Russia. “Let me put it plainly: Vote yes if you believe in upholding the UN Charter. Vote yes if you support Ukraine’s – or any state’s – right to sovereignty and territorial integrity. Vote yes if you believe Russia should be held to account for its actions. Vote no, or abstain, if you do not uphold the Charter, and align yourselves with the aggressive and unprovoked actions of Russia. Just as Russia had a choice, so do you, she said.

It said Moscow shall immediately and unconditionally reverse the decision related to the status of certain areas of Donetsk and Luhansk regions of Ukraine. It calls on the parties to abide by the Minsk agreements and to work constructively in relevant international frameworks, including in the Normandy Format and Trilateral Contact Group, towards their full implementation.

Russia’s Ambassador at the UN Vassily Nebenzia thanked “those who did not support this draft . He said Russia voted against the anti-Russian and anti-Ukrainian draft resolution.

Ukraine’s envoy at the United Nations Sergiy Kyslytsya expressed disappointment over the outcome. I am saddened, however, that there is a small, handful of members that seem to be still tolerating the war, Kyslytsya said. UN Secretary General Antonio Guterres said the United Nations was born out of war to end war but today, that objective was not achieved”.