Coronavirus is a Biological Warfare Weapon 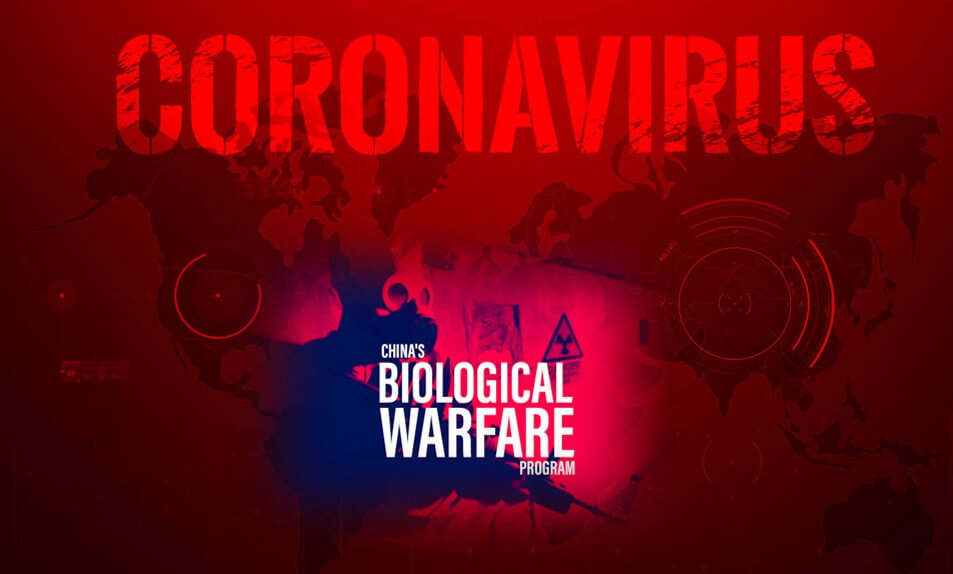 An article published in American Journal of Clinical Studies & Medical Case Reports  by Robert Skopec in December 2020 quotes that Dr. Francis Boyle, who drafted the US Biological Weapons Act has given a detailed statement admitting that the 2019 Wuhan Coronavirus is an offensive Biological Warfare Weapon and that the World Health Organization (WHO) already knows about it. A Lancet study which showed that many of the first cases of the novel coronavirus, including patient zero, had no connection to the wet market.

In a latest revelation, documents obtained by US Sate Department show Chinese PLA Commanders making this prediction as far back as 2015. The Sun of UK and other newspapers reported that the US officials got the papers which were written by military scientists and senior Chinese public health officials in 2015 as part of their own investigation into the origins of COVID-19. A paper titled The Unnatural Origin of SARS and New Species of Man-Made Viruses as Genetic Bioweapons is said to have suggested that World War Three would be fought with biological weapons. Covid 19 or SARS Cov2  belonging to the family of coronaviruses, usually found in animals or birds, were being said to present a “new era of genetic weapons” by Chinese scientists in 2015. The PLA report under reference seems to have contemplated a medical system collapse of the enemy if exposed to a bio weapon attack. The Chinese military scientists allegedly discussed possibility of virus being, “artificially manipulated into an emerging human disease virus, then weaponised and unleashed in a way never seen before”.

As per Dr Boyle, the coronavirus outbreak in Wuhan, China possibly came from  the Biosafety Level 4 Laboratory (BSL-4) from which he believes the infectious disease escaped. It  is potentially lethal and an offensive biological warfare weapon or dual-use biowarfare weapons agent genetically modified with gain of function properties, which is why the Chinese government originally tried to cover it up and continues to blame other nations.

Peter Jennings, the executive director of the Australian Strategic Policy Institute (ASPI), told news. com. au that the document is as close to a “smoking gun” as we’ve got. “I think this is significant because it clearly shows that Chinese scientists were thinking about military application for different strains of the coronavirus and thinking about how it could be deployed,” said Jennings. “It begins to firm up the possibility that what we have here is the accidental release of a pathogen for military use,” added Jennings. He also said that the document may explain why China has been so reluctant for outside investigations into the origins of COVID-19.

Brazilian President, Jair Bolsonaro also made a controversial comment two days ago with a more than oblique reference to China about the possibility of Covid 19 being a bio warfare weapon. He said, “”It’s a new virus. Nobody knows whether it was born in a laboratory or because a human ate some animal they shouldn’t have, But the military knows all about chemical, biological and radiological warfare. Could we be fighting a new war? I wonder. Which country’s GDP has grown the most?”

India needs to look at the second wave of coronavirus outbreak in India with lot of skepticism and from national security angle. The origin of Covid 19 cannot be merely treated as a animal to human transmission which took place accidentally and discard all other doubts saying those are conspiracy theories. China wants to keep India out of its way from establishing itself as a global power and will look at unconventional means to achieve the same, be it through cyberattacks, biological warfare or offensive trade policies. The world at large has begun to speak about biosecurity, biological warfare and seeking answers from China. There is no evidence so far to suggest SARS Cov2 was intentionally released by China. But questions remain unanswered about the origin of the virus even after a unsatisfactory probe by WHO which now has suggested a second investigation about possibility of a lab leak and why the virus spread uncontrollably in India while neighbouring countries did not see such an unnatural surge.