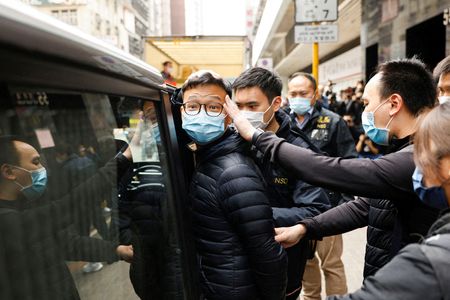 The Hong Kong government is expanding its use of a long-dormant sedition law in what some lawyers and democracy advocates say is intensifying a squeeze on press freedom.

Authorities have not fully detailed what led to the charges. But pro-Beijing media outlets Ta Kung Pao and DotDotNews listed specific Stand News articles that they deemed seditious, including interviews with local democracy activists and opposition figures – topics that until recently were not out of the ordinary in Hong Kong.

A day earlier, prosecutors levelled a new charge of sedition against Jimmy Lai, 74, founder of the now shuttered Apple Daily newspaper and some of his top executives.

The charge of sedition, inciting resistance or insurrection against central authorities, stems from colonial-era laws designed to thwart dissent against the British crown, and had not been used in Hong Kong since the mid-1960s until recently, three legal scholars interviewed by Reuters say. Last month’s sedition charges were the first to be brought against the media since 1967, according to those scholars.

Some legal scholars say recent court judgements have empowered authorities to use the controversial national security law (NSL) imposed on the city by Beijing in 2020, to bolster colonial-era laws, including sedition.

The security law, enacted after sometimes-violent, pro-democracy protests rocked the city in 2019, gives police extra powers of search, seizure and surveillance and makes it tougher for those arrested to get bail. Only judges selected for national security duties will handle cases under the law.

The sedition law allows officials to directly target the published content of media operations and does not require prosecutors to prove that an offending article or speech was intended to be seditious, according to three lawyers.

“To some extent, the government is better armed now,” Simon Young, a professor at the University of Hong Kong’s law school, told Reuters. “The national security law provides an enhanced procedural and investigative framework to bring these charges.”

A barrister whose career has straddled Hong Kong’s handover from Britain to China in 1997, said: “We can see that at a stroke, the NSL has re-tooled these old laws that were largely forgotten. You could say we are now drinking bitter, old colonial wine from new, authoritarian bottles.”

Asked whether the security legislation had enhanced the powers of colonial-era laws such as sedition, the Hong Kong Department of Justice declined to comment but said the prosecution of offences endangering national security was “based on admissible evidence”.

“We express our deep regret regarding the governments, media and organisations of the United States and Western countries in respect of their attempt to twist facts and slandering remarks on the enforcement actions taken in accordance with the law,” a government spokesman told Reuters.

The actions against Stand News targeted “illegal acts” and had “nothing to do with freedom of the press”, he added.

The latest moves extend a media clampdown over the past year that included the shutdown of Apple Daily and the imposition of fresh staff guidelines on public broadcaster RTHK to ensure all content complies with the national security law.

The newspaper, whose articles have often preceded enforcement actions, called on authorities to investigate.

Asked if the government planned to investigate the FCC and the HKJA, a government spokesman said it did not comment on “speculation”. “We will continue to spare no efforts in pursuing the legal liabilities of any organisations and individuals endangering national security.”

Keith Richburg, the president of the FCC and head of the University of Hong Kong’s journalism school, said that the closure of Stand News and arrests “leaves everyone walking on eggshells … It’s an open question as to whether Hong Kong can continue to thrive and prosper without having that free and open and critical press.”

Ronson Chan, the head of the HKJA, dismissed the Ta Kung Pao allegations, and told Reuters the awards process was “independent and fair”.

The government spokesman told Reuters that “freedom of speech and freedom of the press are not absolute, and can be restricted for reasons including protection of national security,” adding that “no one is above the law”.

Broadly defined by legal scholars as a crime of incitement to resist or insurrect, in words or acts, against legal authority, the sedition laws in Hong Kong and elsewhere have long been seen as British colonial relics overtaken by more modern statutes.

According to Hong Kong’s Crimes Ordinance – the legislation that details sedition offences – it is a crime to publish anything that brings “into hatred or contempt or to excite disaffection against … the government of Hong Kong”.

Despite the tough language, some lawyers and academics said they had long believed sedition offences would be difficult to enforce. Freedom of speech and other rights protections have been written into more modern laws, including Hong Kong’s Bill of Rights and the Basic Law, the former British colony’s mini-constitution since its handover to Beijing in 1997.

Ten academics, criminal lawyers and diplomats interviewed by Reuters said their views had changed because the NSL’s powers can be applied to older laws, such as sedition.

Some provisions of the NSL refer generally to acts “endangering national security”, which judges have ruled effectively extends the law’s reach to cover older, pre-existing laws that involve national security, such as sedition and espionage.

And a District Court ruling in April noted that under the security law, the older offence of sedition was now classified as an indictable offence, making it a more serious crime with a potentially longer statute of limitations and tougher sentencing guidelines, according to the legal scholars interviewed by Reuters.

In the past, the offence of sedition was classified as a summary offence that would be handled by a lower court magistrate alone, without a jury.

While the government’s enforcement hand has been strengthened, the basis on which authorities arrested journalists and charged media organisations still needs to be fully tested in Hong Kong’s courts, including the Court of Final Appeal, lawyers, legal scholars and diplomats point out.

Three criminal barristers said certain exceptions written long ago into the sedition law that authorities are now relying on were good ammunition for defence counsel.

The Crimes Ordinance states, for example, that it is not seditious to show the sovereign “has been misled or mistaken in any of (its) measures” or point out “matters which are producing … feelings of ill-will or enmity between different classes of the population of Hong Kong”.