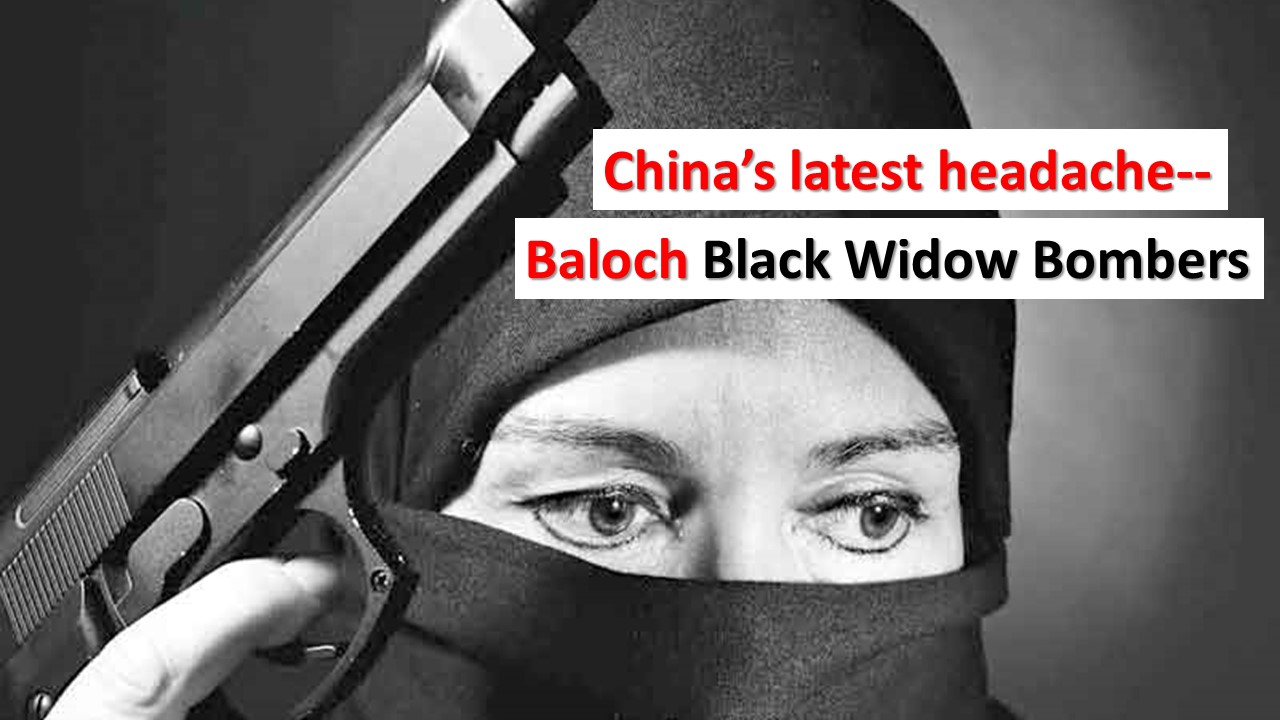 In 2015, China’s Foreign Minister Wang Yi had said, “If the Belt and Road Initiative [BRI] is like a symphony involving and benefiting every country, then construction of the China-Pakistan Economic Corridor (CPEC) is the sweet melody of the symphony’s first movement”. After recent attacks carried out by BLA (Baloch Liberation Army) at Chinese nationals working in Pakistan, CPEC has become a cacophony, which is getting louder with each passing year.

Pakistan government’s exploitative tactics against Baloch and China’s exclusion of Baloch from its projects in Balochistan — both the reasons have helped in adding fuel to the longest Baloch insurgency in the region.

Finally, the world media has begun talking about Balochistan. Baloch Liberation Army managed to grab eyeballs by changing its strategies which is hurting Pakistan and China, where it hurts the most. 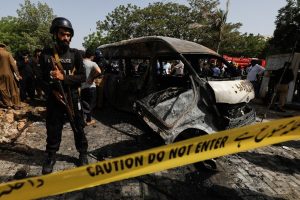 The van in which Chinese nationals were travelling, Karachi.Pic Credit: Reuters

On 2nd Feb this year, BLA carried out an attack at Noshki Frontier Corps camp, in which many Pakistani soldiers lost their lives. It was an ISIS style Inghamasi attack. Last year BLA carried out another suicide bombing close to Dasu dam, Peshawar, in which 13 people were killed including nine Chinese nationals. News like failed attempt to kill Chinese Ambassador last year and largest protests on roads of Balochistan against China, has forced the world to sit up and listen to Balochistan’s story.

The current and fifth period of Baloch insurgency started in 2004, which is still active, making it not just the longest but also the most violent episode of insurgency in Pakistan.

Pakistan and China’s governments have been fed a potent tincture of a medicine which they have been experimenting on their populace since decades. Latest of their woes is women suicide bombers akin to the black-widow bombers of early 2000’s who put the mighty Russians on tenterhooks.

Chechnya’s notorious “Black Widows” came into existence in the year 2000 when the first Chechen female suicide bombers drove a truck filled with explosives into the temporary headquarters of an elite OMON (Russian Special Forces) detachment in Chechnya. This wasn’t an easy task, but the two women managed to complete the mission. For more than a decade after that attack, myriads of black widows carried out attacks against Russian Army causing sufficient damage to Russia and hurting the morale of Russian soldiers. 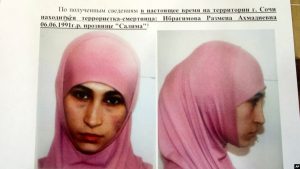 Black widows were called so, as most of the female suicide bombers in Chechnya were those who had lost their husbands to attacks by Russians. This wasn’t the first-time women were being used. Beyond the Palestinian-Israeli conflict, women have been carrying out terrorists acts in Italy (Weinberg, 1987), the U.S. (Morgan, 2001), Sri Lanka and India (LTTE, 80’s & 90’s) and now terrorists’ organizations like Boko Haram also rely on women.

The primary benefits of using female suicide bombers include additional publicity and psychological effects following the attacks, as well as an additional ease in access to targets when compared to male attackers. Women, especially Burkha clad women or pregnant ones can evade security checks, which gives them the edge over their male counterparts vis-a- vis strapping explosives to their body.

But to motivate women to carry out such a dreaded attack is difficult, as biologically they are hard wired to be life-givers and not life-takers. Unless they have suffered emotional trauma!

What motivated a well-educated Baloch woman to carry out a suicide attack?

The rape cells for women and young boys run by Pakistan Army in Balochistan – is the answer.

Increasing presence of China in Balochistan has emboldened Pakistan Army to continue its atrocities against the Baloch. The trauma Baloch have been bearing since decades has finally pushed the men and women into a do-or-die mode. This is probably their last chance to ensure a better future for people in Balochistan.

Baloch Liberation Army released a picture of the woman suicide bomber and a statement saying, “Confucius institute is a symbol of Chinese economic, cultural and political expansionism” and ergo it was targeted.

What surprised many was the fact that the suicide bomber was a well-educated lady, and from a financially sound family. According to a journalist from Pakistan, Shari, aka Baramsh, was a primary school teacher who had done post-graduation in Zoology, had M Ed and M Phil degrees too. Shari had two kids who don’t look older than five years. Her husband is a dentist doctor, and her father served as a Director in a government agency and also as District Council. Her association with Baloch Students Organisation started from her student life and was part of the self-sacrificing Majeed Brigade of BLA. One of her cousins was killed by Pakistan Army in 2018.

Her background reinforces that the lady did not decide to kill others either for money or under coercion. She clearly believed in the cause of Balochistan’s liberation.

Her husband has been arrested along with others who contacted Shari on her mobile regularly. The vicious cycle of torture of these Baloch will continue. 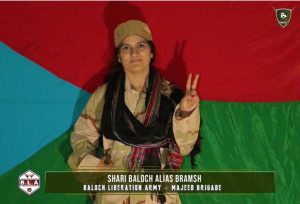 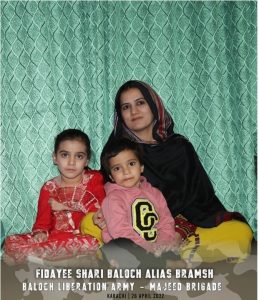 Confucius Institute and Its Nefarious Dealings

China is known to use Confucius institute as a means to drop its roots into every country’s hinterland. This is China’s trojan horse which was founded in 2004, and has enrolled more than nine million students at 525 institutes in 146 countries. Many investigations have confirmed that Confucius institutes are CCP’s (Chinese Communist Party’s) means to carrying out industrial and military espionage, in other countries. One of the most recent incident was reported from Israel where Chinese officials were coercing students to carry out surveillance activities in Israel. But China has met its match in Israel and the plot was exposed in time.

China’s age-old strategy of thousand grains of sand – is a well-planned strategy to use every Chinese citizen as a spy in other countries. Any Chinese citizen who returns to China after a visit abroad, must provide information to the officials about what they saw and observed in other countries. Like a jigsaw puzzle, data gleaned when put together helps the Chinese officials get information from different countries across the world.

After the attack, Pakistan was quick to blame Indian intelligence agencies for arming BLA. But what Pakistan refuses to see or introspect is the decades of exploitation meted out to Baloch people. The Baloch black widow bombers are a proof of the emotional trauma, people in Balochistan have been suffering.

Expecting CCP to learn a lesson from this attack is like expecting the sun to rise from west. Last year they moved their marine commandos to protect their assets in Gwadar port. This attack will give them another excuse to move more soldiers into Pakistan. 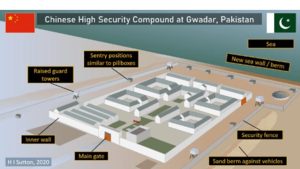 If modern day slavery had a symbol, then it would be a red flag with 5 stars on it.

May 01, 2022
There is no sense making too much of this issue. First off, the damage is symbolic and minor; even if the human cost is quite significant. I.e., China may huff and puff, but it has its eye on the prize (a road to Gwadar, bypassing the likely blockade of Malacca straits); after posturing and rattling their sabers, they will continue with their work (which we are aware, is on a bit of a hiatus). They are quire aware that Pakistani people do no work (hence they send Chinese military personnel to perform all physical and mental labor), and similarly quite aware that Pakistani military and politicians must be bought off (they are not squeamish about this, their culture too is one of corruption - if of a different kind). In short, China has a clear ambition, and a lot of money; a suicide bomb will not stop them. Second, the Baloch people have no friends, and like their brethren in the region, far over estimate what they can do effectively. No, they cannot defeat the Pakistani army. Their cause is just, the atrocities against them perpetrated by the Punjabi Pakistani military are substantial and real. However, they cannot launch anything systematic or permanent toward gaining independence. India cannot really help them, and if India tried, it would likely backfire (just as India's attempt to help the Taliban will only result in emboldening them to hurt our interests). For instance, after giving wheat, medicine, vaccines to the Taliban, Talibani weapons are flooding Kashmir, as are their fighters. Third, female suicide bombers will not win them independence, and China will not be deterred in its full occupation of Pakistan. If anything, if this issue peaks some interest in the west, they might see some opportunity for preventing Chinese expansion; but I doubt they will have any interest in supporting Balochi independence, or preventing Pakistani military's atrocities against Baloch citizens.