China courts the Taliban in Afghanistan 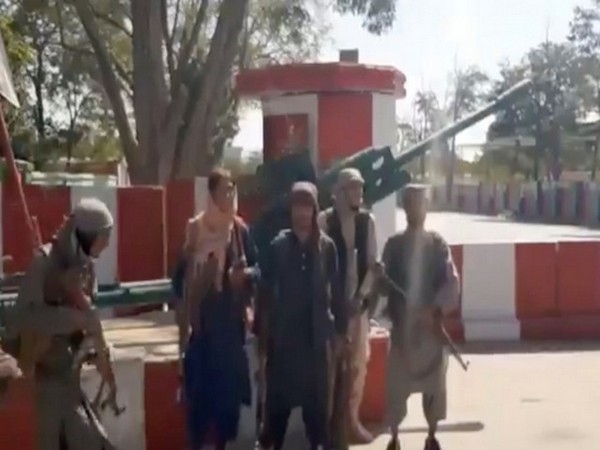 Hong Kong, August 16 (ANI): The world has been left stunned at images of the Taliban’s blitzkrieg across Afghanistan, as that country’s military evaporated with remarkable swiftness. The USA’s legacy there has been irreparably damaged, so will China be able to take advantage as the Taliban installs itself in Kabul?

The meeting itself was not a surprise – for the Taliban has been in China previously for meetings – but the way China publicized it was. Indeed, Wang publicly acknowledged the Taliban as “a crucial military and political force in Afghanistan that is expected to play an important role in the peace, reconciliation and reconstruction process of the country”.

Such a Chinese affirmation was unprecedented, giving the Taliban much-needed legitimacy on the international stage. Remember that many countries still define the Taliban as a terrorist organization.

Uncertainty in Afghan politics required Beijing to hedge its bets. That would allow it to play role of mediator, with China essentially walking a tightrope. Latterly, China saw the writing on the wall for US and Western involvement in their 20-year military operation, and recognized that little stood in the way of the Taliban. Better, then, to cement ties and take advantage earlier rather than later.

Now that the Taliban has emerged victorious, we might expect high-level meetings and support to quicken and thicken.

There is no doubt a security vacuum in Afghanistan after the USA, NATO and allies abandoned the country. Would China step in militarily?

Afghanistan has a well-earned reputation as a “graveyard of empires”, whether British, Russian or, now, American. Beijing will be well aware of this sobriquet, so will be leery of making the same mistakes as the West. Indeed, it would seem far-fetched, at this point in time, for People’s Liberation Army (PLA) troops to be seen on Afghan soil. China has witnessed the USA, UK and allies defeated militarily; it will not make the same error.

Would China supply the Taliban with weapons, for example? Certainly, Beijing has no conscience selling armaments to despotic regimes, but it would surely tightly control anything it did sell to Afghanistan. Some media reported the Taliban had asked for Chinese surface-to-air missiles when the Taliban delegation visited last month.

China does have economic interests there. For example, it would like Afghanistan to embrace the Belt and Road Initiative. However, its primary concern is any security impact upon China itself, particularly in Xinjiang Province in the northwest. Once restive, Xinjiang has been subjugated by a harsh and far-reaching pogrom that sees more than a million Uighurs imprisoned in concentration camps.

Beijing is terrified about Islamic fighters returning to China to foment trouble. In its dealings with Kabul to date, that calculation has always been the priority, and this will not change now that the Taliban has forcibly seized control of Afghanistan.

There are so many imponderables that it is difficult to predict how the China-Afghanistan relations will play out. Will the Taliban be as ruthless as before, imposing strict Sharia law and returning Afghan society to medieval ways of life, or will it rule more softly? Certainly, Taliban promises, such as no retaliation against former military personnel, cannot be gullibly swallowed. The Taliban’s vicious track record speaks for itself.

The way the Taliban governs Afghanistan, and its support for other Islamic groups, particularly those that most would describe as terrorist, will be critical for relations with China.

Economic grounds alone will be insufficient for China to rush into Afghanistan. It has had its fingers burned in Afghanistan already, specifically through investments in the Amu Darya basin oil project and Aynak copper mine. There have been discussions about extending the China-Pakistan Economic Corridor (e.g. a Peshawar-Kabul highway), but with no movement to date. More of concern is protecting existing Chinese investments in Pakistan, rather than venturing into violent and unpredictable Afghanistan.

The Taliban delegation in Tianjin welcomed any Chinese help in reconstructing Afghanistan, although the Islamist group is unlikely to be any less corrupt than the previous government. Taliban spokesman Suhail Shaheen said, “China is a friendly country and we welcome it for reconstruction and developing Afghanistan … If [the Chinese] have investments, of course we will ensure their safety.”

In the first half of this year, Chinese direct foreign investment in Afghanistan amounted to a mere USD2.4 million. This compared to USD4.4 million for 2020, in contrast to USD110 million of Chinese money invested in Pakistan last year.

Wang criticized the failed US policy on Afghanistan, pointing out that China was much more benevolent since it followed a “non-interference principle in the internal affairs of others”. These are mere words, of course, for China is incredibly active in its diplomatic, propaganda, economic, intelligence and military efforts to subvert and coerce other countries.

Beijing is not happy about the US withdrawal, because it increases instability. Will the Taliban support oppressed Uighurs in Xinjiang, for example? Incidentally, China has effectively mitigated or eliminated criticism from other Muslim countries over this. It could probably do the same with the Taliban, for the organization said last month: “We care about the oppression of Muslims, be it in Palestine, in Myanmar or in China, and we care about the oppression of non-Muslims anywhere in the world. But what we are not going to do is interfere in China’s internal affairs.” Such words would please Xi.

Or could Islamist terrorist training camps spring up in Afghanistan? That is a very real possibility, as evinced by Wang’s remarks that the Taliban must “sever all ties with all terrorist organizations, including the East Turkestan Islamic Movement (ETIM)”. The latter is a shadowy organization that many do not even believe exists. However, China’s pointed references to ETIM provide a catch-all description of Chinese Muslims who might dare to wage war against their communist motherland. The USA removed ETIM from its Terrorist Exclusion List in November 2020.

Every terrorist attack in China has been home-grown, with no known links to international terrorist organizations. The danger of these spilling over from Badakhshan in Afghanistan is minimal, so China remains more worried about cross-border threats from places like Tajikistan. The conflict in Syria is of concern, with the risk of battle-hardened fighters returning home.

Of course, the threat may not always be targets within China, given the almost total security lockdown there. Rather, there is concern about softer Chinese targets in places like Pakistan.

The Taliban actually promised in July to not harbor any group hostile to China. However, it is hard to believe the Taliban has such tight control over its members, or over Afghanistan’s rugged terrain, that this might be in any way achievable. The Taliban has already released thousands of prisoners in Afghan government prisons. One of these is reportedly Maulvi Faqir Mohammad, deputy leader of the umbrella group Tehrik-i-Taliban Pakistan.

Ironically, it was the Pakistani Taliban who claimed responsibility for a Quetta hotel bombing that targeted Chinese nationals in Pakistan on 22 April. The group was likely also responsible for a bus explosion in Kohistan in July, and the ambush of a car carrying Chinese engineers in Karachi on 28 July. Beijing will assuredly be demanding the Taliban rein in affiliates in Pakistan. Indeed, a security improvement in Pakistan might be one potential benefit that Xi senses in cooperating with the Taliban.

Wang also told the Taliban it needed to “build a positive image and pursue an inclusive policy,” though human rights hardly seem a priority for this hardline group or for authoritarian China. All it shows is that Beijing prefers to deal with a moderate Afghanistan.

Andrew Small, Associate Senior Policy Fellow at the European Council on Foreign Relations, said: “China does not tend to perceive Afghanistan through the prism of opportunities; it is almost entirely about managing threats. The US presence was understood as a geopolitical threat, much like the Soviet military presence in the 1980s, but Beijing had grown to see it as the lesser of two evils … Beijing certainly hoped that the US would withdraw from the region – but only after a peace deal had been brokered. China is now anxious on multiple counts. Its perennial concern, going back to the Taliban’s last time in power, is the potential for Afghanistan to become a safe haven for militant groups targeting China. Chinese economic and political interests in the wider region have grown considerably since then, though, and Beijing is also worried about the spillover effects in neighboring countries, particularly Pakistan.”

Small assessed: “…Although Beijing is pragmatic about the power realities in Afghanistan, it has always been uncomfortable with the Taliban’s ideological agenda. China wants to see them hemmed in by compromises with other political forces in the country, not resurgent after a military victory. The Chinese government fears the inspirational effect of their success in Afghanistan for militancy across the region, including the Pakistani Taliban.

“Beijing is also concerned about the risks of entanglement in Afghanistan, which is seen as a strategic trap that has diminished the other great powers that have involved themselves too deeply … So, while they see the necessity of taking on a more active political role to deal with the fallout of what is now under way, there is considerable wariness about being sucked in.”

The Taliban’s strongest backer has always been Pakistan, so Beijing’s influence with Islamabad is in its favor. Beijing will lean heavily on its ally to productively engage with, and perhaps control, the Taliban. Of course, an inability to influence the Taliban could place pressure on the China-Pakistan partnership or precipitate a souring of their relationship.

The ramifications of America’s abandonment of Afghanistan are wide.

Indeed, what does it say about US security assurances to countries like Taiwan? With Washington DC able to walk away from Afghanistan so easily – the country from which the 9/11 attacks were masterminded – then what of commitments to other countries? This military withdrawal that President Donald Trump set in motion, but which Biden accelerated, has badly undermined US credibility in Asia, including India, and elsewhere around the world.

As well as this dilution in trust in the USA from already skeptical partners in Asia, China must be smirking at how quickly its protagonist changed its tune. With Xi constantly urging China to gird itself for “prolonged struggle”, it seems the USA has little stomach for it.

Biden even argued that the USA must realign to face “strategic competition with China”. In fact, this disastrous and ignominious withdrawal from Afghanistan reinforces precisely what China is saying: that US power is in decline and that American security guarantees cannot be relied upon. Would the USA really be willing to go to war against China over Taiwan? If it was ready to throw Afghanistan under a bus, why would it care any more about Taiwan or the South China Sea?

Depending on how things go under the Taliban, one day in the future China might well face the dilemma that the USA had in 2001 – to intervene via a costly military venture, or to leave Afghanistan to its own devices? (ANI)