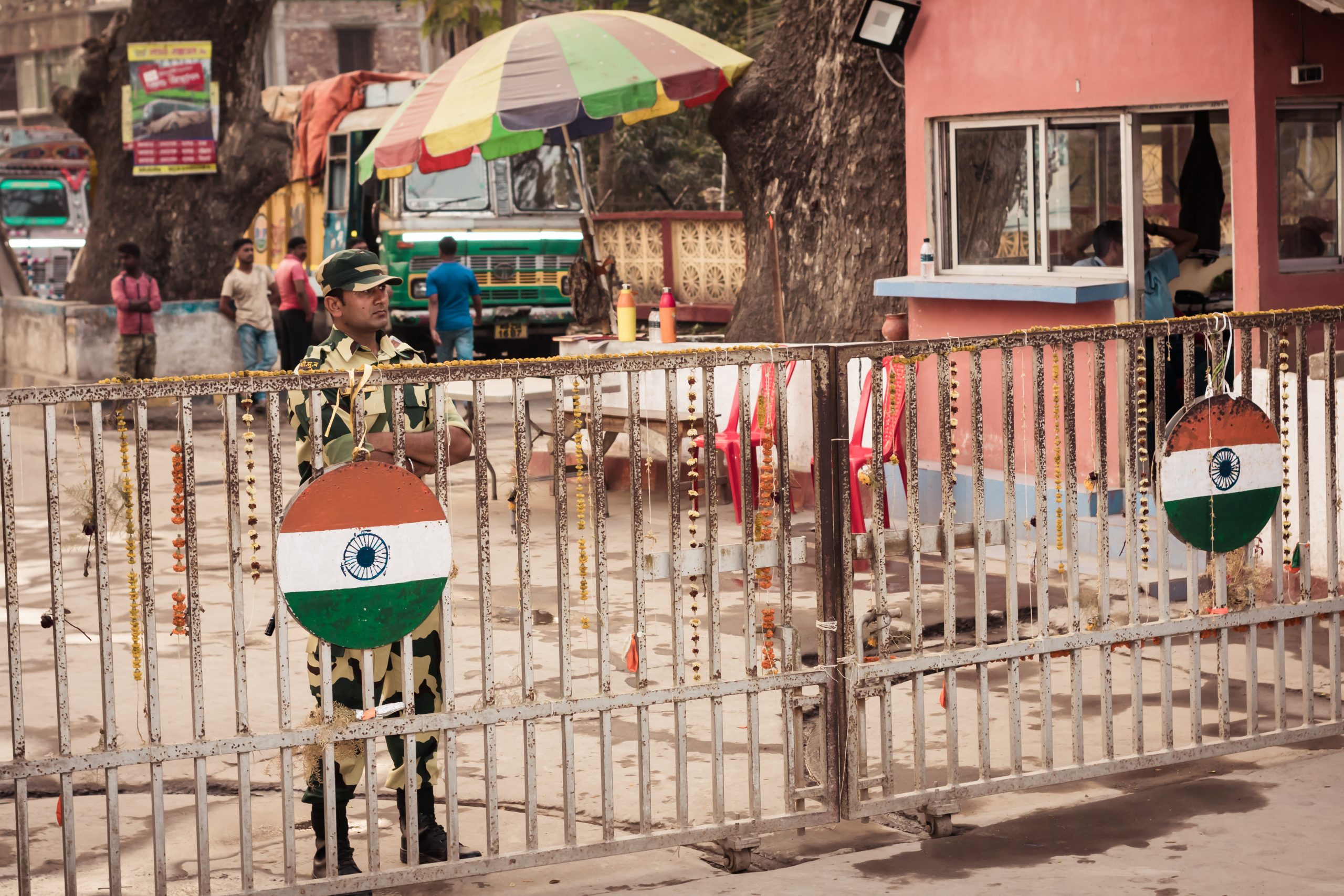 India has 15106.70 Km long borders with six of our neighbours. This includes 106 Km with Afghanistan lying in Pakistan Occupied Kashmir (POK). These represent the extremes of jurisdiction of our country. The land borders run through 16 States, 2 Union Territories and 92 Districts. The coastline of 7516.6 (5422 Km along main land, and 2094.6 Km along Lakshadweep, Andaman Nicobar Islands) touches 12 other States and Union Territories.

Only a few borders in the world are unchallenged i.e. there are no disputes about them between the neighbouring countries. The borders of India with its neighbours are particularly problematic, especially, the border with Pakistan and Bangladesh because of the circumstances of their birth. The scalpel of Sir Cyril Radcliff left fierce and lasting controversies over the boundaries he delineated. The problem of J&K, Sir Creek and now resolved problems of Enclaves and disputed boundary along Bangladesh are results of partition imposed on the subcontinent. Even the problem of disputed border with China is also  a British legacy.

Besides the myriad of disputes, the borders are porous and prone to several types of crimes. The borders therefore need to be secured. The border is defended by the Defence Forces during war and guarded by four border guarding forces during peace.  Border Security Force (BSF) is responsible to guard India-Pakistan and India-Bangladesh border, Indo Tibetan Border Police (ITBP) for India-China border, Sashatra Seema Bal (SSB) for India-Nepal and India-Bhutan border and Assam Rifles (AR) for India-Myanmar border.

The borders of India are dynamic places with ever changing security scenario. The scope of present discussion is limited to peace time security challenges along India-Pakistan and India-Bangladesh border.

India-Pakistan border has two hot spots – Kashmir and Sir creek. The Line of Control (LC) in Kashmir is exploited by Pakistan to logistically support militancy in J&K by sending in militants, weapons and finances. The LC along with 200 Km of International border in Jammu – whose status also is disputed by Pakistan is in a perpetual no war no peace state, with unending violations of cease fire. Challenge in this area till the time relations between India and Pakistan improve will remain preventing infiltration of militants. Many measures like fencing the LC, induction of technical surveillance devices etc have been undertaken. Measures like strengthening the intelligence network, and developing 24 hours surveillance ability should be priority areas to strengthen security measures here. The man behind the machine being extremely important, the logistics and maintenance of morale, especially in remote high altitude areas is extremely important.

The LC cannot remain in perpetual state of turmoil as it affects the lives of border population. Regular violations of ceasefire affect their livelihood, cattle stock, education of their children etc. While physical loss of property can be compensated, the adverse psychological effect, especially on the young children is immeasurable and the scars remain with them throughout the life. The strategic community therefore, must plan for eventual normalization of situation where peace and tranquility prevails. Initial steps in this direction appear to have been taken with recently announced Cease fire. The best case scenario is that the LC is converted into a flexible border some times in future. The strategists must therefore plan on the implications and replace the militaristic border guarding systems along LC with peace time systems.

The fence along the border in Punjab has a major contribution in containing militancy in Punjab by cutting of the logistics of militants from Pakistan. This prompted the policy makers to extend it to rest of the border with Pakistan and subsequently on the borders with Bangladesh. The effectiveness of fence has further been enhanced by floodlighting and installation of early warning systems. The fence has been constructed at a distance of 150 yards or more from the border in adherence to the ground rules. Over the years, the adversary appears to have found ways of circumventing the obstacle.

The trans-border criminals and drug runners have started adopting various methods like “conceal and clear” in which they conceal their consignment on the far side of the fence to be cleared by their accomplices later. They also use pipes through the fence to slide the contraband to own side of the fence. Riverine area which cannot be fenced is also exploited by the criminals.

The fence has created a sort of mental barrier for the troops and they consider that preventing fence breach tantamount to securing the border. The challenge for the leaders of BGF is therefore to ensure that the area ahead of the fence is dominated both during day and night. This will not only prevent the criminals from exploiting it, but will also help enhance the sense of security amongst border population. The land ahead of the fence which is unutilized must be put to productive use.

The border guarding has to move from archaic manpower intensive to technology driven methodology. The technology must be user friendly. The technology inducted must be area specific to ensure effectiveness of border guarding and to ease the burden on troops. For example, the Aerostats or BFSR etc. will be effective only in thinly populated areas of Rajasthan and Gujarat.  The surveillance systems should be such that the entire area can be kept under observation from a centrally located command post. The troops can operate from these posts as QRT.  System should be hooked up through network to the supervisory officers enabling them to guide the troops if necessary.

The planners also must devise ways to reduce the cost of border guarding without compromising with the effectiveness. We may start by replacing the existing floodlighting with Solar power generated floodlights through a network of appropriately located Solar Power Stations.  An alternative measure to reduce cost is to install sensors so that the flood lights are switched on only when the sensors detect a movement. This will, besides, reducing the cost also add to surprise.

The cattle smuggling and illegal migration remain major problems on India–Bangladesh border. Similar ethnicity, traditional family relations and location of population centers right up to the International Border make this border difficult to guard. Better living conditions and relative economic prosperity on Indian side makes it attractive for Bangladeshis to crossover to India for better prospects. Easy availability of Indian identity documents further facilitates this illegal migration to India.

Illegal migration coupled with problem of cattle smuggling and concomitant violence gives this border the dubious distinction of being the 6th most dangerous border in the world. The challenge before the planners is to ensure that the border areas are economically developed and the population is imparted skills that make them employable. Developing infrastructure in border areas will generate employment as well as add to the quality of life thus weaning away the population from crime. India can even consider helping Bangladesh in developing their border area so that their nationals also desist from crime. Besides easing border situation, this will also help further improving relations with Bangladesh.

Cattle smuggling is half a Billion-dollar business. Cattle comes all the way from North and west India, crossing several states without being intercepted by law enforcing agencies or the animal rights activists, thus putting the entire onus on BSF to stop them from crossing over. Stopping thousands of cattle rushing towards the border through riverine gaps being pushed by hundreds of cattle smugglers armed with sharp edged weapons is an extremely difficult proposition. Involvement of politicians and heavy profit margins make smuggling of cattle an extremely attractive proposition. There is heavy demand for cattle from India as the entire leather and meat industry of Bangladesh is dependent on it. The Bangladesh therefore actively encourages and in fact they refer to the criminals involved in it as cattle traders. Death or injury to anyone involved in this activity therefore creates lot of problems for the Government in Bangladesh and causes diplomatic furor.

The challenge therefore is to minimize violence along this border. The non-lethal strategy put in place by BSF for the last few years has reduced causalities but has led to higher attrition amongst troops. Reducing causalities to troops and at the same time reduce crime remains a challenge for the leaders of the force. This can be achieved with better coordination between BSF and BGB (Bangladesh Border Guards) through the Coordinated Border Management Plan (CBMP) signed between the Director Generals of the two forces.

The area of Kaliaganj in Malda district is notorious for smuggling of “Fake Indian currency notes” (FICN) from Bangladesh. This area needs to be specially monitored and should be the focus of intelligence agencies.

The BSF also faces the challenge of manning riverine borders in Sir Creek area of Gujarat in west, Bay of Bengal, Brahamputra River and several smaller riverine patches in the east that cannot be fenced. While the Water Wing of BSF patrols these areas, a lot more needs to be done to ensure continuous surveillance of these areas. Technical gadgets robust enough to bear the vagaries of elements must be tested in field conditions before induction.

To conclude, it has to be emphasized that India-Pakistan and India-Bangladesh borders even though very lengthy, porous and crime prone have to be secured properly in order to keep the illegal migrants, criminals and terrorists out.

Sanjiv Krishan Sood, former Additional Director General of Border Security Force  has served along all the borders of our country with Pakistan and Bangladesh including 8 years on LC.  A security analyst, his interests include Border Management, Issues of topical interest, Role of security forces in Security Matrix of India, Police, Politics etc. While in service, he compiled a book on “Border Management” which is approved as reference material for the members of Border Security Force. He is a regular invitee on the panels of many TV Channels of India.

Mar 16, 2021
Teachers always Teachers till their last breath and always guiding their pupils. Sir excellent word is little less for your article, no doubt it's a admirable guidelines for all border guarding praharies. Salute sir