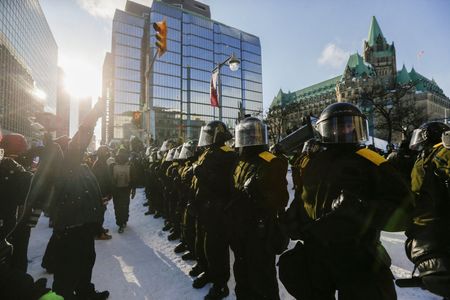 By Steve Scherer and Carlos Osorio

OTTAWA (Reuters) -Canadian police on Saturday used pepper spray and stun grenades, and made dozens of arrests as they cleared demonstrators from the street in front of parliament, where they have been camping for more than three weeks to protest against pandemic restrictions.

A total of 170 arrests have been made in two days, Ottawa’s interim police chief, Steve Bell, told reporters. Police by afternoon had dispersed the main portion of the blockade in front of parliament and the prime minister’s office. After nightfall, police sent a message on Twitter to demonstrators saying: “Get out of the cold and cease further unlawful activity” or risk arrest.

City crews were now engaged in cleaning up and towing away remaining vehicles, Bell told a news conference. But other pockets around the city had yet to be cleared, and there was a risk that demonstrators might change location, he said. “We are aware of protesters leaving the parliamentary precinct moving to surrounding neighbourhoods. We are not going anywhere until you have your streets back,” Bell said, addressing Ottawa citizens. 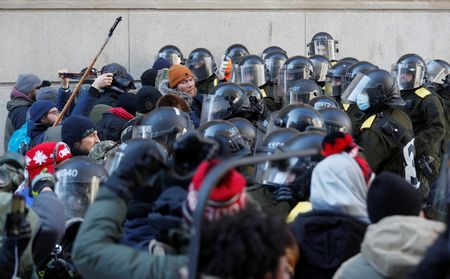 Using bullhorns, police warned the crowd to disperse or face arrest. For a second day, police also urged protesters to remove young children from the area. “This is dangerous and is putting young children at risk,” Bell said. Protest organizers for the so-called Freedom Convoy said they had asked trucks to withdraw because of what they called heavy-handed police tactics, and many trucks did exit the downtown core on Saturday. Fifty-three vehicles have been towed, police said.

Officers smashed vehicle windows to arrest people locked inside. Some of those arrested on Saturday wore body armour and had smoke grenades and other fireworks in their bags and vehicles, police said. Police confirmed the use of stun grenades and pepper spray. Protesters threw smoke canisters, but no tear gas has been used, police said. As part of the ongoing protests, several border blockades had been put in place in recent weeks, but all had reopened until Saturday, when demonstrators again closed the Pacific Coast Highway border crossing south of Vancouver.

Many of the main organizers in Ottawa have been taken into custody, and some have reportedly left. On Saturday, organizers said on Twitter they were “shocked at the abuses of power by the law enforcement in Ottawa” and so had “asked our truckers to move from Parliament Hill to avoid further brutality.” The protest organizers said protesters had been “horse-trampled” on Friday, which police deny. “We hear your concern for people on the ground after the horses dispersed a crowd. Anyone who fell got up and walked away. We’re unaware of any injuries,” police said on Twitter.

The protesters initially wanted an end to cross-border COVID-19 vaccine mandates for truck drivers, but the blockade has gradually turned into a demonstration against the government and Prime Minister Justin Trudeau. “This is our final stand. … When it ends, it ends and it’s in God’s hands,” said Jeremy Glass, a protester from Shelburne, Ontario. 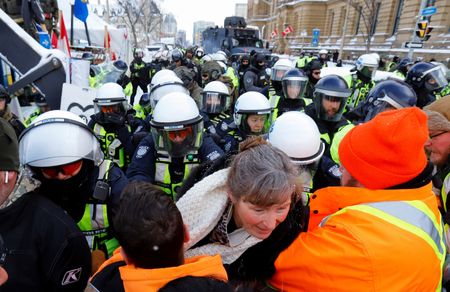 Trudeau on Monday invoked emergency powers to give his government wider authority to stop the protests. He authorized banks and financial institutions to temporarily freeze the accounts of those suspected of supporting the blockades, without obtaining a court order. “An ongoing effort to blockade that port of entry (south of Vancouver) really shows why the Emergencies Act continues to be a necessity,” Public Safety Minister Marco Mendicino told the Canadian Broadcasting Corp on Saturday.

Financial services providers have used the emergency powers to freeze at least 76 accounts with a total of C$3.2 million ($2.5 million), Mendicino told reporters earlier in the day. The federal government said on Saturday it would provide up to C$20 million to Ottawa businesses that have suffered losses due to the  blockades. Debate in parliament over the emergency powers resumed on Saturday, and a final vote is scheduled for Monday. Trudeau’s Liberals and opposition New Democrats have indicated their support, which should ensure its passage.

Protesters, who have been filmed by police, will be held accountable, Bell said. “If you are involved in this protest, we will actively look to identify you and follow up with financial sanctions and criminal charges. … This investigation will go on for months to come.” 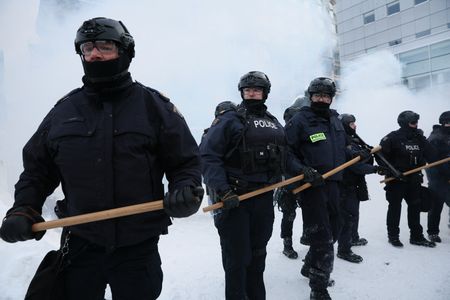 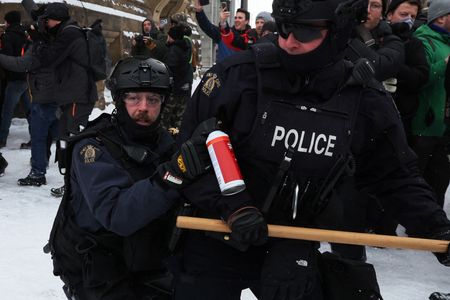 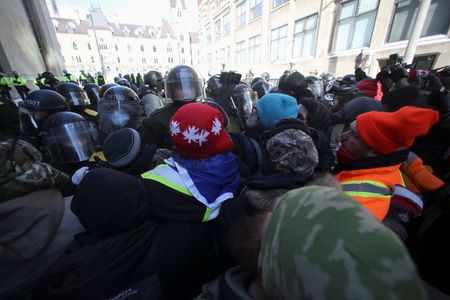 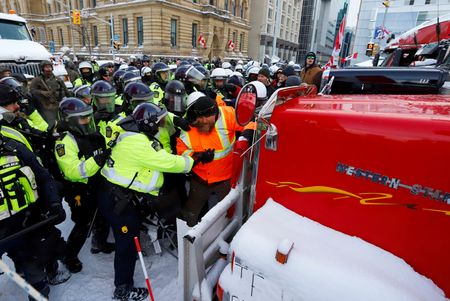 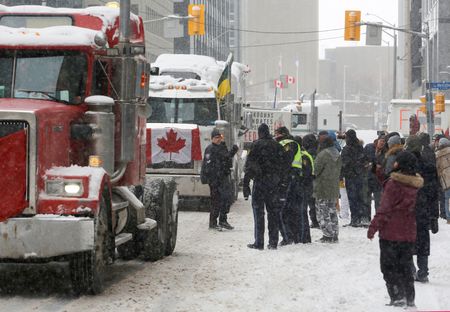