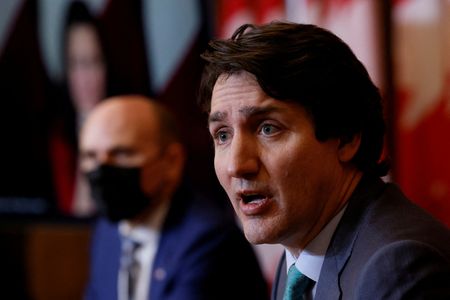 By Steve Scherer and Ismail Shakil

OTTAWA (Reuters) -Canada on Wednesday said it would send non-lethal equipment to Ukraine, and help the Eastern European country gather intelligence and counter cyber attacks as Russia builds up its military presence on its borders.

Prime Minister Justin Trudeau also said his government would extend for three years and double the size of a mission to train the Ukrainian military called Operation Unifier. Russia has massed tens of thousands of troops near its border with Ukraine but denies planning to attack its neighbor. The United States and Britain have started sending more arms to Ukraine. “With rising tensions, and unwarranted Russian aggression, Canada will be there to provide ongoing support to Ukraine so that it can defend itself,” Trudeau told reporters.

Canada will also set up a task force and expand its diplomatic capacity – including in Kyiv – to coordinate support for Ukraine, Foreign Minister Melanie Joly  said. “Diplomacy is the only viable path forward for Russia. Any further aggression will have serious consequences including coordinated sanctions, and Canada is prepared,” Joly said. Defense Minister Anita Anand will visit Latvia and Ukraine “in the coming days” to visit Canadian forces in both countries, Trudeau said.

Some 200 Canadian military personnel are already in Ukraine as part of the training mission, which has been provided to “over 30,000 Ukrainian soldiers”, Anand said. Trudeau said the training mission would be extended by three years, at a cost of C$340 million ($268.5 million), with 60 additional Canadian soldiers leaving within days. Ultimately as many as 400 Canadian trainers may be sent, the prime minister said.

Canada, with a sizeable and politically influential population of Ukrainian descent, has taken a strong line with Russia since its annexation of Crimea from Ukraine in 2014.