By Invading Ukraine, Has Putin Prevented a Nuclear War? 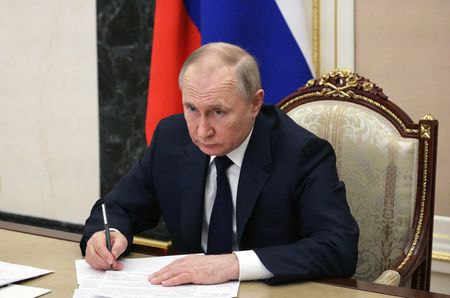 In the context of the Russian invasion of Ukraine, the Western corporate media, such as the New York Times, BBC, CNN etc., have gone into a frenzy, condemning Russia, hurling personal insults at Putin, calling him names etc. This is crude behaviour in diplomatic terms, but the West is known for indulging in it when it finds that it cannot do anything else to turn the situation on the ground in its favour.

The Western corporate media is also known for lying, publishing articles based on government handouts [which are themselves known for lying], and indulging in psychological warfare (also known as psyops) to demonise and demoralise the enemy. One of their favourite topics is human rights, which they claim to be the guardians of around the world, never mind that they are the biggest killers of innocent women, children and men since the 1950s. Need evidence? Please find out what they have done in Korea, Vietnam, Afghanistan, Iraq, Syria, Libya and Ukraine itself, whose democratically elected President they overthrew in February 2014 and installed an illegal regime that terrorised and killed thousands of Ukrainian citizens in Russian-speaking Eastern Ukraine, also known as Donbass. Many of their leaders are guilty of committing war crimes and crimes against humanity, yet at least two of them have been awarded the Nobel Prize for Peace!

The United States and its EU allies are also fond of comparing themselves favourably with the Russian government as far as protecting human rights and civilian lives are concerned. But can they claim moral superiority vis-a-vis the Russians? What does the historical record since WW II say?

To begin with, while the US has used nuclear weapons, twice, and that too deliberately against civilian targets which had no military value, Russia has not used them at all. The US has yet to apologize to Japan for doing so. Many respected scientists, historians and experts in international relations also believe–with strong circumstantial evidence–that America’s use of nuclear weapons was not necessary because Japan was, in any case, close to surrendering. [Actually, the use of nuclear weapons is illegal in International Law irrespective of the circumstances. The only logical reason for possessing them is to prevent intimidation and nuclear blackmail].

The US [and the other four members of the UN Security Council who, too, possess nuclear weapons] also insists that no country (other than the five mentioned in the NPT) has the right to possess nuclear weapons, even for deterrence or blackmail. India has rejected this line of reasoning from the very beginning and continues to do so, on the ground that it is discriminatory, which it is.

The US has also propounded the theory of “American Exceptionalism,” which, in simple words, means that laws that apply to the rest of the world don’t apply to it at all! No country accepts this “Exceptionalism.” The Russians make no such claim.

The US record of invading and/or destabilizing countries without any provocation is unmatched by any country, including the Soviet Union/Russia. Some examples are: The Korean War in the 1950s; the CIA-backed coup in 1953 against the democratically elected government of Iran; Vietnam; the illegal NATO bombing of Yugoslavia in 1999; the invasion of Iraq in 2003; the NATO bombing of Libya in 2011; the ongoing destabilization of Syria to effect regime-change in 2011; and the US-orchestrated coup in Ukraine in February 2014, which created the conditions for Russia’s invasion of that country in February this year. And this list does not include what the US has done in Latin America, in countries like Nicaragua, Guatemala, El Salvador, Grenada etc.

When I try to think of the Soviet/Russian invasion during the same period, Afghanistan comes to mind, but it was not unprovoked. How do I know this? I know it from the horse’s mouth, so to speak, the horse in this case being Zbigniew Brzezinski (ZB), President Carter’s National Security Advisor in 1979. ZB boasted in an interview to a French newspaper sometime in the late 1990s (the text of the interview is available here: https://www.marxists.org/history/afghanistan/archive/brzezinski/1998/interview.htm) that the US had set a trap for Soviet intervention in Afghanistan in 1979. The Soviets got caught in it and paid a heavy price for doing so. He didn’t seem to mind that the chain of events in Afghanistan after the Soviet intervention directly led to the emergence of the Al Qaida, Taliban, 9/11 etc. He seemed very pleased with himself.

In the present case, viz., the Russian invasion of Ukraine, Russia was left with no choice because all of its diplomatic efforts to meet its security concerns were ridiculed by both the US and NATO. But how did the same US react in 1962, when the Soviets deployed nuclear missiles in Cuba? [And by the way, it’s not very well known that the Soviets were forced to do so because about six months earlier, the US had deployed nuclear missiles in Turkey. The Soviets finally agreed to remove their missiles from Cuba on the condition that the US agree to withdraw its missiles from Turkey, which it did, six months later. To save its face, the US requested the Soviets to keep this part of the deal secret, which Khrushchev graciously did].

Russia is reacting in the same way, except that Ukraine is much worse than Cuba, circa 1962. Since the US-backed coup in February 2014, it has been pumped up by the West by supply of lethal weapons and training to NATO standards. That’s why Ukraine’s President Zelensky [who used to be a comedian] thinks the Russian invasion of the country is a joke and that he will have the last laugh.

Well, so far neither the US nor NATO have come to his aid overtly, which they might have done if Ukraine were admitted to NATO. And Ukraine was on the verge of being admitted to NATO. Only, Putin pre-empted that. By doing so, he probably eliminated the possibility of a war fought with nuclear weapons.

Niraj Srivastava was India’s ambassador to Denmark and Uganda. He has also served in Indian missions in Damascus, Washington D.C., Tripoli, Riyadh and Ottawa and at Headquarters in Delhi. During a sabbatical year in 2001-02, he taught a seminar on “International Politics of South Asia” to undergraduate students in Georgetown University, Washington D.C.

Apr 07, 2022
This information really enlightened me personally, and only generate more and more hate against US. They claim as if they are saint but they are bloody themselves war criminals