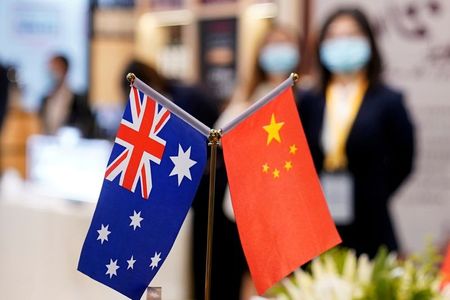 SYDNEY (Reuters) – Australia’s adoption of foreign interference laws in 2018 helped to curb Beijing’s overtures to the Chinese community there but led to tension that alienated many Chinese-Australians, the Lowy Institute foreign policy think tank said in a report on Tuesday.

The law, criticised by Beijing, brought a deterioration in ties that worsened after Australia banned telecoms giant Huawei from its 5G network and urged an international inquiry into the origins of the coronavirus, with China imposing trade reprisals.

The souring of ties left many Chinese Australians caught in a contest for their loyalty, said the report, based on interviews with 30 such individuals identified as leaders in their field, some of them in government, and five focus groups.

China, ruled by the Communist Party, actively reaches out to overseas Chinese communities, in Australia and elsewhere, to promote the country’s political interests and economic development, the report said.

There are 1.2 million Australians of Chinese heritage.

While many Chinese-Australians welcomed laws against foreign interference as helping to protect against such efforts, a larger number said political, verbal, and sometimes physical attacks on Chinese communities had also increased amid Australia’s intense national debate about China, it added.

The law increased scrutiny of Chinese Australian community organisations. Such bodies set up in Australia over the past two decades had clear links to China’s government, the report found.

“While these groups claim to speak for Chinese-Australians, our research suggests that most people have little or no engagement with these organisations,” said Lowy Institute research fellow Jennifer Hsu.