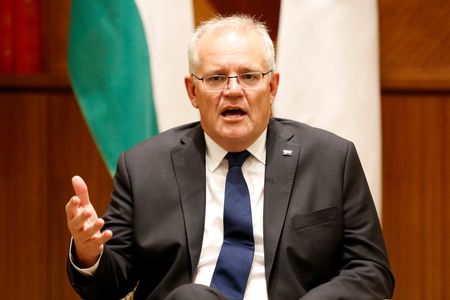 (Reuters) – Australian police have given thousands of protesters until the end of Sunday to leave occupied areas of the country’s capital, as days-long rallies continue against COVID-19 vaccine mandates.

No protesters in Canberra had been arrested so far on Sunday after three were detained on Saturday.

“They must be out by today,” the police spokesperson said, declining to say what action authorities would take if protesters refused to comply with demands to leave.

Authorities played songs, including Baby Shark, Macarena and hits by Barry Manilow over loudspeakers in a bid to disperse the demonstration, amid the wild weather caused by the remnants of a tropical cyclone.

The storm on Sunday moved across New Zealand’s North Island, causing heavy rain and gale-force winds in many parts, the country’s weather bureau said on its website.

Australia logged 22,750 new COVID-19 cases in the last 24 hours, while the number of new cases in New Zealand almost doubled to a daily record of 810.

(Reporting in Sydney by Samuel McKeith; Editing by Lincoln Feast.)