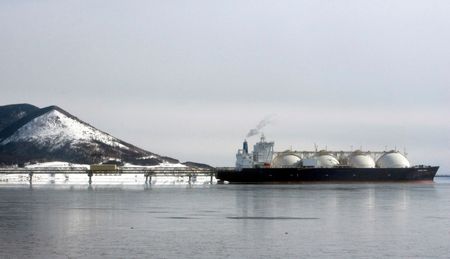 TOKYO (Reuters) – Japanese Prime Minister Fumio Kishida’s announcement on Thursday that he would not abandon a massive Russian gas project was decided weeks ago when he told top officials in private he wouldn’t risk Japan’s energy security, three sources said.

Kishida assured his trade and economy minister, Koichi Hagiuda, and other officials during meetings in early March that he would stay in the Sakhalin-2 liquefied natural gas (LNG) project because leaving threatened the economy, the sources said.

The sources with knowledge of those meetings declined to be identified because they are not allowed to speak on the record.

Kishida on Thursday told parliament “it is not our policy to withdraw” from Sakhalin-2, the clearest public comments yet on the offshore project.

The details of the March meetings and the subtle shift in public messaging by both Kishida and other government officials in the weeks that followed help illustrate the difficult balance the Japan has had navigating its response to Russia’s Ukraine invasion with other Group of Seven (G7) nations.

Even as it targets Russian banks and oligarchs with sanctions, Japan has less leeway than some of its allies to cut ties to Russian gas, on which it has become more reliant since shutting down nuclear reactors after the 2011 Fukushima disaster.

Faced with national elections in July, Kishida wants to avoid soaring fuel bills and the risk of blackouts. In the immediate aftermath of the invasion – which Russia calls a “special operation” – Japan initially emphasised the need to move in tandem with the G7, while maintaining a stable supply of energy.

But in the weeks that followed, policymakers increasingly talked about how Japan’s stakes in LNG projects could be at risk of seizure and the importance of energy security.

Kishida’s announcement may also represent a victory for the trade ministry’s energy policy over foreign ministry diplomacy, and could soothe investors in Japanese trading houses that own stakes in Sakhalin-2 and other projects in Russia.

For more than a decade, energy-poor Japan has tapped Russian gas to cut its Middle East oil reliance and to make up for lost nuclear capacity.

Although it accounts for a small portion of Japan’s LNG, the Russian gas costs a fraction of spot market rates and, along with gas from Australia and Southeast Asia, has boosted the amount of energy consumption under Japan’s control to more than a third from less than a quarter a decade ago.

If Japan were forced to replace Russian LNG with gas bought on the spot market, that would mean an additional cost of up to 3 trillion yen ($25 billion), at the current spot price, a senior energy agency official, who asked not to be identified, said.

Japanese gas and electricity companies use Russian LNG. Hiroshima Gas, from Kishida’s hometown, relies on it for half its supply. Overall, LNG accounts for a quarter of Japan’s total energy mix and generates 36% of the country’s electricity.

“Even if supply can be secured, the cost of gas will rise tremendously,” said Ken Koyama, senior managing director at the Institute of Energy Economics.

For some government officials, the big fear is Japan would lose the right to tap gas from Sakhalin, undermining national security by threatening energy independence.

Oil remains Japan’s biggest energy source at around two fifths of consumption, and nearly all is transported from the Middle East along sea lanes that pass through waters patrolled by the Chinese navy.

If Tokyo were to ban Russian gas, Beijing could also step in to buy it, one of the sources said. China has called for an immediate ceasefire in Ukraine but has refused to explicitly condemn the invasion.

Energy independence had long been a concern for Japan, and “could eventually cause tension with Europe and the United States”, the energy agency official said.

Still, Kishida may have to reconsider if France pulls out of the Arctic LNG 2 gas development project in Siberia, which is 10% owned by French oil major TotalEnergies, another one of the sources said.

The United States, a close ally, has so far praised Tokyo’s sanctions, including a recent ban on Russian gold and a pledge to stop potential sanctions-busting using digital assets, as “unprecedented”.

So far, the G7 has only agreed to reduce dependence on Russian energy rather than impose an immediate halt to energy purchases. Germany in particular is wary of banning Russian supplies that account for about a third of its gas.

But as outrage grows over Ukraine, other G7 countries could push Kishida to halt Russian gas.

“If the rest of the G7 decide to ban Russian energy imports then Japan must do so too. If the G7 decides not to, then Japan can avoid doing anything,” said Takayuki Homma, chief economist at Sumitomo Corp Global Research.