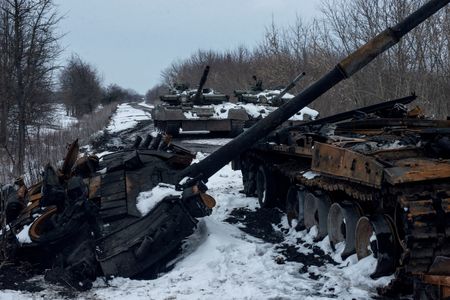 HONG KONG (Reuters) – For decades Russia has, more than any other country, aided China’s dramatic military modernisation with weapons and technology – and now Beijing has plenty that Moscow needs as its Ukraine invasion continues, military analysts say.

At the top end, China has developed systems, such as reconnaissance and armed drones, guided weapons and battlefield communications, that might help Russia fill gaps that are being exposed on the Ukraine front.

Russia might also need more common materiel, such as anti-tank weapons, trucks and ammunition, that China has in storage.

The long-standing military relationship is under international scrutiny after media reports, sourced to U.S. security officials, that Moscow is seeking military aid and support from Beijing. Chinese and Russian officials have denied the reports.

“Recently, the U.S. has been spreading disinformation against China time and again on the Ukraine issue, with sinister intentions,” Chinese Foreign Ministry spokesman Zhao Lijian said on Monday.

Some foreign military analysts and diplomats are sceptical that Beijing would want to be drawn directly into the conflict by such a Russian request.

Analysts also note that some of China’s most advanced equipment could not be easily or quickly integrated with Russian’s other gear.

But there is still plenty that Russia might want and need from the Chinese, reflecting a multibillion-dollar one-way trade that means at least some Chinese weapons and technology could be quickly utilised.

“If the reports are correct, it can be seen as interesting admission that the student is now better than the teacher, at least in some areas,” Siemon Wezeman, a senior arms transfer researcher at the independent Stockholm International Peace Research Institute (SIPRI), told Reuters.

SIPRI data shows that during the last decade, China has obtained from Russia advanced turbofan engines for its aircraft, radars and advanced surface-to-air, anti-ship and anti-tank missiles as well as naval guns and transport aircraft.

Although SIPRI doesn’t list values for all transfers, some are large and have stretched over several years, such as China’s $3 billion acquisition of eight state-of-the-art Russian S-400 air defence missile systems and a $2 billion purchase of 24 Su-35S fighter aircraft, its data shows.

While Chinese military scientists have used Russian technology to develop their own weapons using proprietary systems or calibres that would be hard to convert, older munitions such as guided bombs would readily fit onto Russian aircraft and its associated GLONASS satellite systems, Wezeman said.

No weapons transfers have been made in the other direction, according to SIPRI data – so any Chinese move to meet Russian requests would be highly unusual, if not unique, diplomats say.

Five foreign military analysts and three regional envoys said mounting Western pressure on China meant that Beijing may be wary of overtly transferring weapons or munitions, but could offer parts or communications help that was more discreet or deniable.

The Chinese Defence Ministry did not immediately respond to Reuters’ requests for comment.

China’s long land border with Russia means such transfers could be difficult to trace, the three diplomats said – and China had comparatively ample supplies and more active factories than Russia.

“The bottom line is the Chinese military is growing and modernising at a pace the Russian military really isn’t… (it) is far weaker and more stagnant than China’s military, with the exception of nuclear forces,” said Tim Heath, a senior researcher with the U.S. government-linked RAND Corporation think-tank.

Heath said that Chinese parts and supplies would not turn Russia’s struggles around in Ukraine: “Ultimately, it’s all Russian weapons and people fighting. And the Chinese bond is going to be extremely limited at most.”

Sam Roggeveen, director of Australia’s Lowy Institute International Security Programme, said the reported Russian requests had put China “in a bit of a bind” even though it had considerable military help to offer.

In Beijing, independent political analyst Wu Qiang said the U.S. officials’ statements had raised the stakes for Beijing over its military trade with Russia.

“The United States is sending an ultimatum to China, asking China to choose a side,” Wu told Reuters.