On 08 September, the Cabinet Committee on Security cleared a US $ 1.5 billion proposal from the Indian Air Force (IAF) to indigenously build six Airborne Early Warning & Control (AEW&C) Netra Block-2 Systems mounted on the Airbus A-321 aircraft to be purchased from Air India- an expeditious follow-up to Acceptance of Necessity (AoN) accorded for the project only in December last year.

Flight trials are expected to commence by 2025, with induction to be completed by the end of the decade. The impetus being accorded by the Government of India to this project underlines the astute understanding of the imperativeness to improve the existing airborne radar profile and significantly boost India’s capability towards real-time, airborne strategic surveillance, in order to safeguard India’s Western and Northern borders.

What is an AEW&C System

An AEW&C System is an aircraft mounted airborne radar which can carry out airborne surveillance and can therefore detect and monitor enemy assets and movement at extended ranges beyond a country’s borders. This ‘system of systems’ can also assume control of the airspace and select, direct/ redirect and guide aerial missions including Battlefield Air Strike (BAS) and Counter Air missions. Battle/ Post Strike Damage Assessment (BDA/ PSDA) and Identification Friend or Foe (IFF) are also important functions. A typical AEW&C System is network centric with secure two-way data links, augmented with satellite communication, that can receive surface inputs and transmit integrated and synthesised information obtained from onboard/ surface sensor feed as well as command & control inputs to surface-based receivers.

The following systems typically make up a modern AEW&C System:-

The Legacy of the AEW&C System

The legacy of the eye-in-the-sky began in the 1930s when the British developed an aircraft mounted radar for ‘air controlled interception’, against German maritime aircraft.

In 1944, the US launched Project Cadillac, to develop an AEW&C System in response to the increasing threat from Japanese Kamikaze aircraft. Subsequent upgrades saw development of the Lockheed EC-121 Warning Star in 1949, which was the mainstay of AEW coverage for US forces during the Vietnam War, until it was replaced by the E3 AWACS. Interestingly, during the same period, blimps (airships) were also used by the US for AEW coverage owing to their great endurance. However, these were discontinued following a crash 1962.

The Soviet Union, not to be left behind, developed the Tupolev Tu-126 AEW&C platform, which entered service in 1965 and served for two decades thereafter, until it was replaced by the Beriev A-50 AEW&C System mounted on the Ilyushin IL-76 Aircraft in 1984. The latter and its upgrades continue to be in service with Russia and other countries including India.

The United Kingdom also emerged as a major operator of AEW& C Systems during the 1980s, initially mounting the AN/APS-20 AEW Radar on US aircraft and then on indigenous platforms.

Presently, close to 50 countries operate the AEW&C Systems. Some leading AEW&C Systems currently in vogue are described below.

Boeing AWACS.  This system uses a rotodome (rotating radome) with a pulse doppler radar developed by M/s Northop Grumman Corporation of the US. The rotodome is mounted on a E3 Sentry (Boeing 707) aircraft, with an upgrade more recently being installed on the Boeing 767, pioneered for use by the Japan Air Self-Defense Force. The 3D radar of the AWACS allows concurrent measurement of various target parameters like azimuth, range & elevation, thus permitting quicker target location. The E3 Sentry and its variants are also in use with NATO, France, UK and Saudi Arabia.

E-2 Hawkeye.  The E-2 Hawkeye, developed by M/s Northop Grumman Corporation of the US, is an all-weather, carrier capable AEW aircraft. The aircraft is in use with the US Navy and the Armed Forces of France, Israel, Japan, Egypt, Mexico, Singapore and Taiwan. The latest variant is the E-2D Advanced Hawkeye, which features the AN/ APY-9 Radar, reported to be capable of detecting stealth fighter aircraft. The E-2D features a glass cockpit and is AAR capable, thus substantially enhancing endurance and ‘loiter-time’.

Beriev A-50 “Mainstay”.  This Russian AEW&C aircraft can control up to 10 fighter aircraft for either air-to-air interception or ground attack missions. The aircraft is capable of AAR. It features a large non-rotating radome on the rear of the fuselage. The A-50 U is an upgrade which features a digital avionics suite. The A-50/A-50 U will be eventually replaced by the Beriev A-100, which mounts an AESA Radar. The export version (A-50 EI) for the IAF mounts the Israeli El/W-2090 AESA Radar, which consists of an array of transmitter/receiver modules, allowing the radar beam to be electronically steered and obviating the need for a rotating radome. The AESA radar has high scan rates and uses random frequencies, making it difficult to detect and jam.

Heliborne AEW&C Systems.   With specific reference to India, the Russian Kamov Ka-31R with E-801M radar can track 20 targets simultaneously, detecting aircraft up to 150 km and surface warships upto 200 km away. The Kamov is deployed on the INS Vikramaditya and Talwar Class Stealth Frigates and will see deployment on the Indigenous Aircraft Carrier INS Vikrant.

It is of interest that AEW&C Systems have come of age in the Indian subcontinent. In fact, it is the first time in military aviation history that two opposing Nations have used AEW&C Systems against each other in aerial conflict, when IAF used the A50I Phalcon AWACS and the Pakistan Air Force (PAF) used the Saab 2000 Erieye AEW&C System against one another during the Balakot airstrikes in February 2019.

In a testimony to India’s determination for self-reliance in Defence systems, the IAF and DRDO’s Centre for Airborne Systems (CABS) commenced research for development of an AEW&C System in 2003.  DRDO’s Electronics and Radar Development Establishment (LRDE) was responsible for the design of the radar array, while Defence Electronics Application Laboratory (DEAL), was responsible for the data link and communication systems. In February 2017, DRDO delivered the AEW&C Netra System with indigenous AESA radar to the IAF, with the second aircraft delivered in September 2019.  These systems are mounted on the Brazilian Embraer EMB-145 platform, already in service with the IAF. The Netra offers 240º coverage akin to the Saab 2000 Erieye, onboard MSDF, ELINT, SIGINT and IFF capabilities. The aircraft also has AAR capabilities, thus enhancing endurance for gap free surveillance coverage. The system has datalinks to network the AEW&C System with fighter aircraft as well as with and ground-based control systems and is Satellite Communication System (SATCOM) enabled. The aircraft is equipped with a comprehensive self-defence suite, with passive Missile Approach Warning System (MAWS), Radar Warning Receiver (RWR) and countermeasures (chaff/ flare) dispensers. Each system will have the capability to network more than 40 users.

In the interim, India procured three Phalcon AWACS with Israeli EL/W 2090 AEW Systems, mounted on IL-76 Aircraft, with delivery commencing in 2009 and completed by March 2011. The EL/W 2090, described above in this article, is an upgrade of the EL/M 2075 AEW System, once described by the Federation of American Scientists as the most advanced AEW&C system in the world!  Post the Galwan clash in May-June 2020, India decided to acquire two more Phalcon AWACs Systems at a cost of US $ 1 Billion. The decision to use the Airbus A-321 as the aerial platform for the six indigenous AEW& C Systems to be developed by DRDO was governed by the fact that the aircraft can perform the roles of AEW&C platform as well as an air-to-air refueller.

India’s existing AEW&C profile along with that of the Chinese Peoples’ Liberation Army Air Force (PLAAF) and PAF as per open source inputs are tabulated below:- 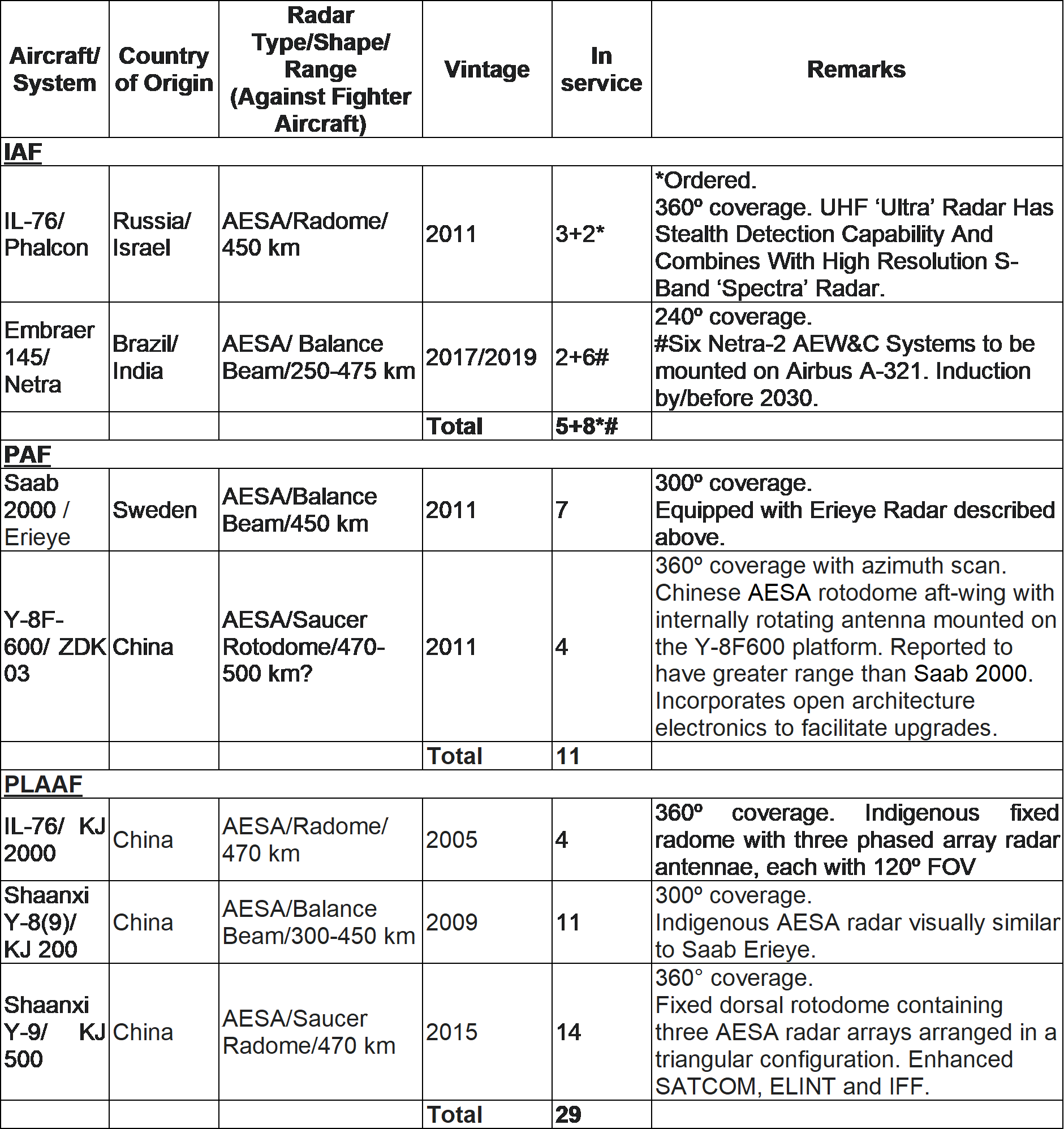 The numbers in the table above would suggest that the PLAAF has a definite quantitative edge over the IAF and this deficit is unlikely to be bridged in the foreseeable future. However, the vintage of the platforms points in India’s favour, with more than half of existing Chinese AWACS being more than a decade old in service. Another factor that swings in the PLAAF’s favour is the enhanced stealth that the AWACS would offer to platforms like the J-20 Stealth Fighter, touted as China’s answer to the F-35 ‘Lightning’. In stealth mode and operating in conjunction with the AWACS, the J-20 would have access to targeting information without having to switch on its own active transmitters, thus making it difficult to detect, even in a contested aerial environment. Weapons guidance to ordnance like the long range Air to Air Missile (AAM) could also be provided by AWACS till its terminal stage.

A facet for consideration is also the terrain configuration along India’s Northern Borders. The Tibetan Plateau boasts of mean altitudes in the region of 12000- feet (PLAAF has deployed KJ-500s to Lhasa-Gonggar Airfield in Tibetan Autonomous Region {TAR}), while the average terrain profile in North East/ Eastern India is much lower. Operating from high-altitude airfields would impact the All-Up-Weight of Chinese assets, translating into lower fuel storage and consequently lesser ‘loiter time’- this would necessitate deployment of a greater number of assets by the PLAAF for round-the-clock surveillance. On the flip side, the substantial difference in altitude above MSL would impact the surveillance range of India’s AEW&C radars into the Tibetan Plateau, a disadvantage that Chinses AWACS might not face. Use of the Phalcon with over the horizon (OTH) capability and greater flight ceiling of the IL-76 platform would obviate this disadvantage to some extent. The PLAAF would also face a disadvantage of lower cruising speed of the turboprop platforms of the KJ-200 and KJ-500, which in turn would affect surveillance ranges.

It is relevant to note that the present peacetime deployment of both types of IAF assets is along the Western Front (WF). Apropos, lower radius-of-action of the Embraer Aircraft might require redeployment for surveillance along the North Eastern Borders of the country-this disadvantage would however get mitigated to a large extent with AAR capability of both types of AEW&C Systems in service with the IAF.

As regards the PAF AWACS profile, the quantitative disadvantage faced by the IAF would be obviated in the near future with forthcoming inductions. However, it is expected that the PAF would also look to expand its AWACS inventory. The present numbers with the IAF might cause insufficient coverage over Pakistan, especially in light of the requirement for similar surveillance over TAR. The IAF, however has a qualitative edge in radar capabilities, especially when compared to the ZDK-03, across varied terrain configurations, with ability to switch between both types of assets along the WF.

Cutting edge technology in aerial weapon platforms and air-to-air/ air-to-surface ordnance can only deliver results if the available surveillance and targeting technology matches the delivery platforms in capability. The AEW&C System is an imperative asset in the arsenal of any Nation in order to carry out persistent surveillance and direct own efforts towards effectively intercepting, mitigating and neutralising aerial and surface threats.

Oct 04, 2021
the japanese aircraft named US-2 SHINMAYA and things lile that were rejected by a female BABU from the PMO saying (weLL iT DoesN't Have a sIngle WeapOn) really ???? you could put MARCOS commandos in that plane and let it land anywhere in the indian ocean. It would be like india's version of THE EXPENDABLES but why would BABUS make our country stronger by buying such a magnificent aircraft from JAPAN ???? They wouldn't get their commission/brokerage anyways.