Admiral R Hari Kumar, Chief of the Naval Staff calls on Union Minister Dr Jitendra Singh, Discusses “Deep Ocean Mission”, which is to be the torchbearer of India’s “Blue Economy” 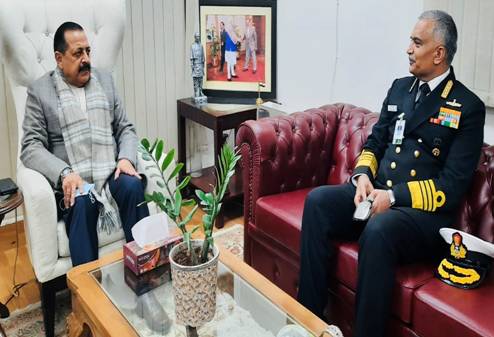 The Minister said, “Deep Ocean Mission” is designed to explore India’s deep ocean for resources and develop deep-sea technologies for sustainable use of ocean resources. It will have an important bearing on India’s future economy, he added.

Pertinent to mention that the Indian Navy is a member of Deep Ocean Council and it will be involved in launching and recovery of Man submersible in deep water, which will be developed under the Deep Ocean Mission. The Ministry of Earth Sciences and Indian Navy are to soon sign a MoU for knowledge sharing in the areas of design and development of underwater vehicles.

Dr Jitendra Singh recalled that during his Independence Day address from Red Fort last year, Prime Minister Narendra Modi had said that “Deep Ocean” Mission will take India’s development to new heights in the 21st century. The Deep Ocean Mission is a mission mode project to support the Blue Economy initiatives of the Government of India.

Dr Jitendra Singh informed that the preliminary design of the manned submersible MATSYA 6000 is completed and realisation of vehicle is started with various organization including ISRO, IITM and DRDO roped-in to support the development. He said, it is designed to carry 3 people to a depth of 6000 metres in the ocean with suit of scientific sensors and tools.

Dr Jitendra Singh launched India’s First Manned Ocean Mission Samundrayaan at Chennai in October, last year and thus joined the elite club of nations such as USA, Russia, Japan, France and China to have such underwater vehicles for carrying out subsea activities. The Minister informed that this niche technology shall facilitate Ministry of Earth Sciences, MoES in carrying out deep ocean exploration of the non-living resources such as polymetallic manganese nodules, gas hydrates, hydro-thermal sulphides and cobalt crusts, located at a depth between 1000 and 5500 metres.

The Modi Government had approved the Deep Ocean Mission (DOM) in June, 2021 to be implemented by the Ministry of Earth Sciences at a total budget of Rs. 4077 Crore for 5 years. DOM is a multi-ministerial, multi-disciplinary programme with emphasis on development of deep-sea technology that includes development of manned Submersible rated for 6000 metre water depth along with technologies for deep sea mining, exploration of deep-sea mineral resources and marine biodiversity, acquisition of a research vessel for ocean exploration, deep sea observations, and capacity building in Marine Biology.