A Hundred Days of Shocks and Surprises 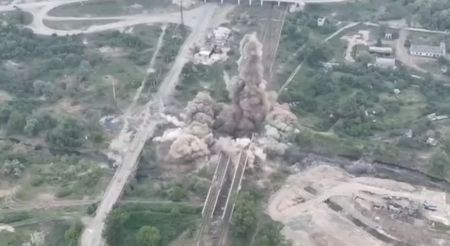 The hundred days of a devastating war in Ukraine have proved once again that nothing is predictable in war, even in a David and Goliath kind of confrontation. In a situation where no one predicted an invasion of Ukraine by Russia, it was announced that Russia would be engaged in a special military operation in the Donbas region to demilitarise and “denazify” Ukraine, a kind of limited war. But one week into the war, when satellite imagery showed a 64 kilometres long column of armoured Russian vehicles advancing towards Kyiv, it appeared certain that Kyiv would fall, and a new regime would be installed in a matter of days. But the setback to the Russian army on account of the unexpectedly staunch resistance by Ukraine appeared to open possibilities of a ceasefire and negotiations.

What followed was, however, a devastating war, which inflicted losses not only on Ukraine, but also on Russia. According to the UN High Commissioner for Human Rights, at that time, 4183 people were killed, 5014 injured and 6.9 million people fled Ukraine as refugees in Europe. The Russians decided to avoid Kyiv, but fought for Mariupol and won a pyrrhic victory, claiming that they had gained access to the Crimean Peninsula and thus won their objective. But the battle for Azvostal Steel Works became a symbol of resistance against the Russian invasion. Fighting continued in Bucha where thousands of Ukrainians were butchered, while the Russian forces were forced out of Kharkiv. Neither side is in a position to claim victory and declare a ceasefire. A war of attrition has set in without any sign of progress. Both Ukraine and Russia are locked in a struggle which both consider existential.

The President of Ukraine declared that Ukraine has defended itself for 100 days successfully and victory will be certain for Ukraine. Russia sought comfort that “certain results have been achieved” like liberation of Ukraine from the Nazis. Russia has also said that the liberation of Donets and Luhansk, which have been recognised as independent states was “an unconditional priority.” This might mean that total control of the Donbas region, containing Ukraine in east and securing a land bridge to Crimea and denying Ukraine access to the sea might be a victory for Russia. But President Putin shows no sign of ceasing hostilities and battles are raging in different parts of Ukraine and he may well be pursuing his dream to roll back the events of 1991.

The US and NATO do not want to fight Putin directly, but they are arming Ukraine to continue the war and strengthening the sanctions to inflict damages on Russia and thus weaken it. The damage is done not only to Russia and other parts of the world on account of rising fuel and food prices and Europe itself is struggling to reduce its dependence on fuel from Russia. The war has united the US and NATO and also the UK, which has strengthened its defence tie-ups with NATO despite Brexit. Germany and Italy have increased their military budgets and Finland and Sweden have applied for membership of NATO. Just as Russia and Ukraine are ready for a long war, the US and NATO have no reason to rush to a settlement which may not be in its favour. They seem ready to continue their proxy war in Ukraine and try to strangle Russia through economic sanctions. They seem to be banking on a Ukrainian triumph and possibly a regime change in Moscow. Russia is facing a deep recession and erosion of its economic potential.

In the meantime, the rest of the world, near and far, have begun to feel the heat of debilitating price rise with the possibility of extreme poverty and famine in the least developed countries in Africa. The west is too preoccupied with its own problems to be concerned about failing states like Sri Lanka, which cannot survive without money from the World Bank and the IMF. The global recovery from the pandemic has already suffered on account of food and energy prices and the developing countries dread to engage in a costly and protracted readjustment to the new realities. It is the poor countries far and wide who fervently wish for the end of the war.

India has consistently urged peace and predicted that no one will be a winner in this war. Caught between a legacy relationship with Russia and the Quad partnership with the US, Japan and Australia on account of an intransigent China, India has been trying to help in finding solutions to the looming fuel and food shortage by buying oil from Russia and rationing food exports to countries, which do not have access to the food market. But these measures are seen by the west as unhelpful to their sanctions battle with Russia. The US and Europe have expressed concern over the Indian position, though some understanding has been reached at the recent Quad summit in Tokyo. India continues to highlight how the west has neglected Afghanistan and other hot spots in Asia.

The only certainty about the war is its uncertainty and we have not seen the last of the surprises of the war even after a hundred days. It may well happen that all of a sudden, President Putin may announce a ceasefire, there may be a long stalemate in the battlefield or even a victory for Ukraine or Russia. More likely, a futile war may drag on, causing irreparable damage to the world economy.

Jun 13, 2022
Indias stand is commendable. The EU and US both, ignored Asias problem when sloppy Afghan withdrawal by USA and subsequent neglect by EU when Taliban took over shows that they do not care abt our problems. As Jay said about EUs attitude Towards world problems “what is yours is yours and what is ours is yours too.”